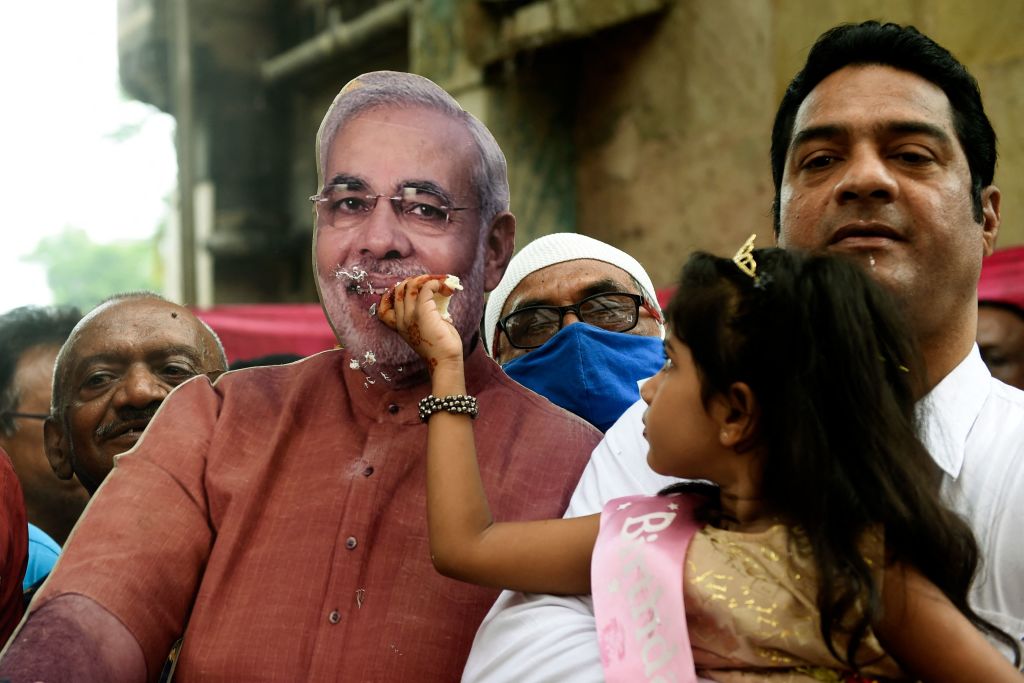 A girl offers cake to a life-size cutout of Indian Prime Minister Narendra Modi on the occasion of Modi’s 71st birthday in Ahmedabad on September 17, 2021. (Photo by SAM PANTHAKY/AFP via Getty Images)

INDIA on Friday (17) made a record 22 million coronavirus jabs in a day as part of a special vaccination drive for the birthday of Prime Minister Narendra Modi.

Authorities set up special vaccination centres in stadiums, shopping malls, clinics and other venues as it sought to boost the lagging campaign to inoculate 1.1 billion people by the end of the year.

The previous daily best was 14 million in August.

Health Minister Mansukh Mandaviya said “it’s a gift from the health workers and citizens to the prime minister” as more than 20 million daily jabs were reached for the first time on Modi’s 71st birthday.

Modi tweeted that all Indians should be “proud” of the record.

“I am anticipating that we might cross 2.5 million vaccinations today,” said state immunisation officer Ajay Ghai.

Launched in January, the vaccination campaign was slow to take off because of shortages and hesitancy among the population.

It has picked up in recent weeks, reaching between five million and eight million on average each day.

About 788 million vaccine doses have now been given, but the number of eligible people with two doses is still below 20 per cent.

The government was particularly stung by criticism after a brutal coronavirus wave in April and May killed more than 200,000 people.

Daily infections and deaths have fallen dramatically since the surge and many restrictions on movement have been ended, but authorities fear a new wave as the end of year festival season gets underway.

The country has so far recorded 437,370 deaths and more than 32 million infections — with 34,000 cases and 320 deaths reported Friday — the second-highest in the world after the US.