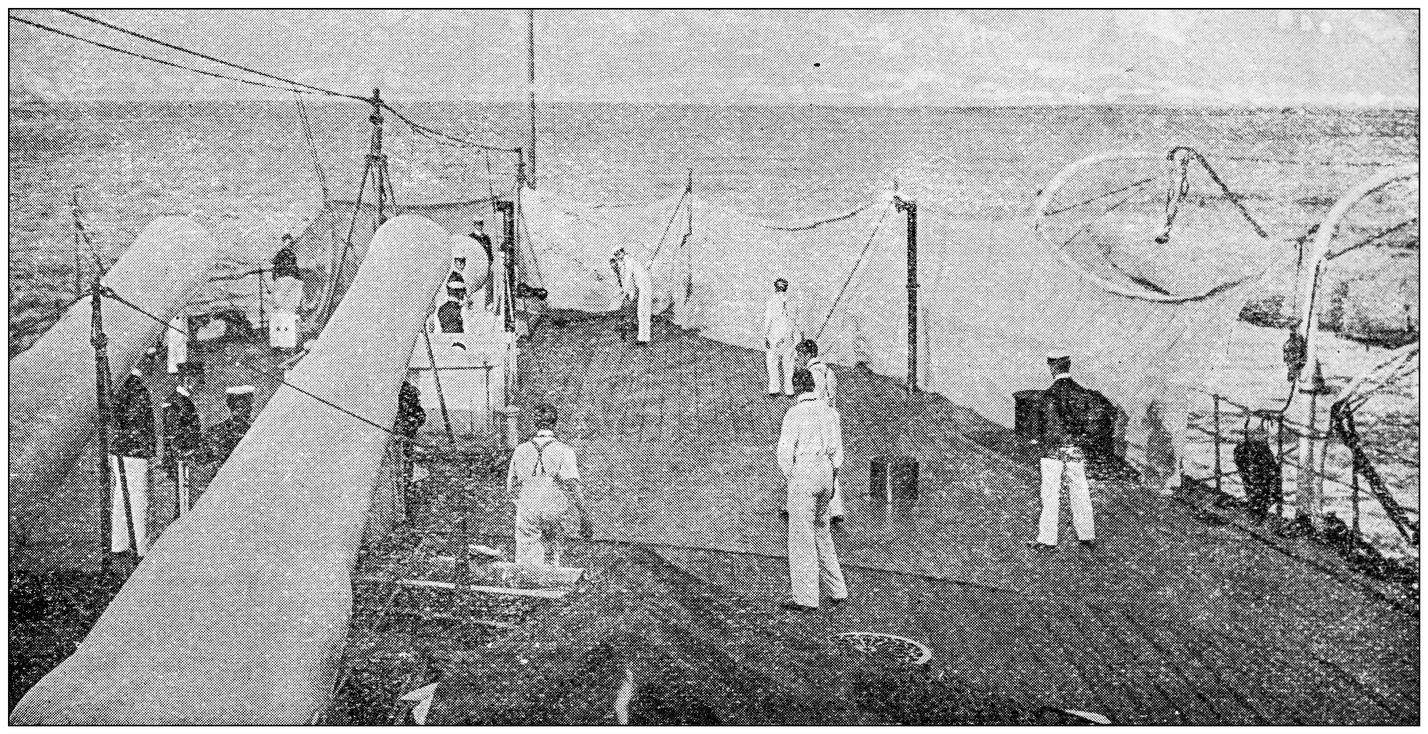 INTERESTING PAST: A painting of sailors playing cricket.
Follow Us

The reference comes in a confused, if lively, History of the Indian Wars (1737), composed by an unreliable able seaman, Clement Downing, seeking re-employment with the British East India Company.

Two country-built boats in the service of the Company, the Emilia sloop and the Hunter galley, had sailed from Bombay to protect the many smaller craft bringing bales of Indian goods down the coast from the fabled trading entrepôt of Cambay.

Tacking through the treacherous banks of the Gulf of Cambay to evade attacks from Kanohji Angria’s Maratha navy and hostile Kathiawari sea-farers from Sultanpur and Beyt, the two boats missed the spring tide that would have taken them over the bar towards the fast silting-up Cambay. Instead, they turned aside into the Dhadhar River to lay up in the productive cotton-growing and manufacturing Jambusar pargana.

After a tender left taking the two ship’s captains, Hearing and Doggett, up to Cambay, the crews of the ships, in the charge of Lieutenants Stevens and Rathbone, diverted themselves for nearly a fortnight at cricket and other exercises.

The directors of the Company back in London, had they known, would have had a fit.

The British were quite literally all at sea on the west coast at this time, unwelcome in Surat and clinging on to a toehold in the pestilential swamp of Bombay.

The big contending land powers were the Mughal satraps and the resurgent Marathas.

Downing himself is glad to find service with Rustum Ali Khan in Vadodara just as other Brits are with the Marathas.

Among the European traders, the Dutch are the dominant presence and on land Downing, discretely clothed in local dress, hitches a ride on their caravans or with the Armenians.

Even so, the British Company is doing enough business across the country in silks and cottons to cause the London weavers to riot and throw acid over women wearing the fashionable Indian calicoes.

Goaded by the rabble-rousing pamphleteering of Daniel Defoe, an Act of Parliament is passed in 1721 banning the wearing of them.

Exactly who was playing this cricket on the banks of the Dhadhar? That we do not, and cannot, know for sure, but we can deduce a few things. On the Emilia there are three Europeans and 18 Indians.

Less certain is the composition of crew on the Hunter, larger for being a galley, but scorned by the Company for being so small. At a guess there might be some 10 Europeans aboard, not necessarily English, and 50 Indians. Exceptionally, for this expedition, 12 marines off a newly-arrived warship, the London, have been seconded to the Hunter.

Once the detachment of perhaps half a dozen Europeans and 20 Indians have gone on up to Cambay, we may guess 20 Europeans and 50 Indians are left on the riverbank. Upon landing, expecting attacks from local raiding Mahi Kanta Kolis, they throw a defensive ring round their encampment. This is on pasturage where the cotton and grain plantations begin and there is fresh water.

That everyone present had to take part in the exercises there can be no doubt. These exercises are a drill, this is a military operation, all at the ready, though by the end of the fortnight the drill does seem to have shaded into recreation.

It’s a pound to a penny that it was some of the marines off the London who introduced the cricket. This rural working people’s pastime was only just emerging from the shadows and was still known only in the extreme south-east of England.

The London had sailed out of Gravesend and that part of Kent was then famous for having the best cricketers of all. It is possible the lads off the London kept the game to themselves, but extremely unlikely. Cricket delighted in putting together oddball teams and over nearly a fortnight in a festive run-up to Christmas they would probably have involved as many of the others as possible, having to teach the game to everybody else, whether European or Indian.

Forget Lagaan: 1721 is not 1893. The British officers concerned show themselves to be respectful of the Indians – on whom their lives depend – and their customs.

Captain Herring tells Downing his predecessor Captain Sedgewick brought his own death on himself by inadvisedly firing on Kolis at the mouth of the Dhadhar. While the nature of his request may make some shudder, Lieutenant Rathbone actually asks permission if he may shoot a peacock (presumably for Christmas dinner).

Downing, even as he is involved in Rustum Ali Khan’s punitive attacks on the Kolis (for failing to pay lagaan, or tax), praises them for their industry and egalitarianism.

All parties recruit the Gogharis from across the Gulf, so respected are they for their unyielding bravery.

The real question may be whether the Indians would agree to engage in the cricket. Their serangs had a lot of say in what their crews did. After diverse other exercises had been gone through during a week or more onshore, Rathbone may well have turned to his bosun and said: Come on, Bosie, have a bat. Give it a go. We do know that, by then, another factor was kicking in. The defensive ring round the pasture had been surprised to be facing not raiders but curious onlookers.

Initially, a large procession issued from Jambusar, armed Kolis on guard at its head, to find out what was happening down by the river. Far from attacking, they were evidently intrigued by what they saw for they came down several more times. Since Downing singles out cricket from the other exercises, we may surmise it was this rather than anything else that brought them back.

Well, the cricket resembled a martial art in that something like a cannonball was hurled along the ground at a man with a curved wooden sword defending a target (two short sticks topped by one twice their length). If this defender hit the ball he would run, but without attacking whoever picked up the ball. Intriguing indeed: mock warfare with little physical contact or injury. No wonder word spread, and this veritable Bharat Army returned to watch some more.

This being so, was the defensive ring facing out free to turn inwards and field instead? While the guard would never have been let down in a hostile situation, there would have been a changing of the guard and so the likelihood of a turn and turn about exists.

We do know the cricketalia (as this mixed form, common on fair-grounds and estates in 18th century Kent, was once called) proved (relatively) disarming.

Although still armed, a foraging party was encouraged by the unexpectedly peaceful turn of events to set out at the end of the fortnight in search of provisions at a Koli settlement, probably Tankaria. The Patel agreed to allow Rathbone to trade so long as his party remained civil. Among other things, they purchased two bullocks at `20 each and two sheep at `2 each, besides a dozen fowls and some flour and butter.

At the conclusion of the trading, the interpreter warned Rathbone that he didn’t like the look of several Kolis cutting and sweeping with their – probably Bharuchi – swords. Rathbone was unfazed.

Perhaps he imagined that, among those who had come to watch the cricket, there were Kolis who already fancied themselves as batsmen?

John Drew, formerly a student of Chanchi Mehta’s at MSU, is author of India and the Romantic Imagination (Oxford India). He plays cricket for Clare Hall, Cambridge.