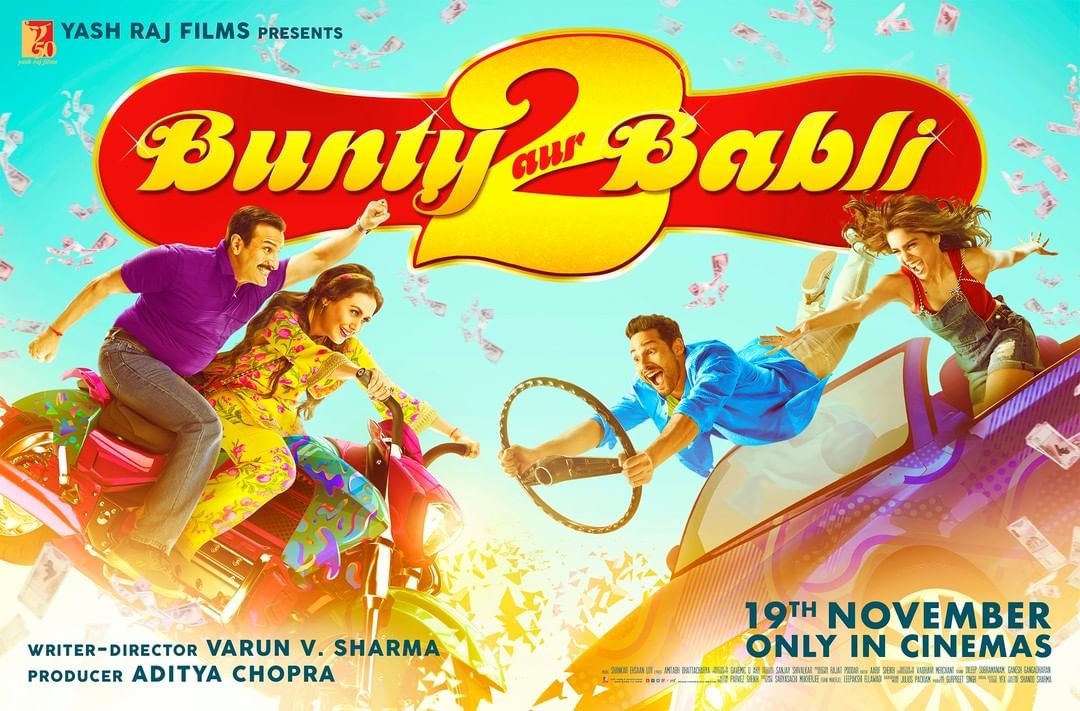 In October, we saw some interesting films like Rashmi Rocket, Sardar Udham, Bhavai, and others. While most of the films last month were released on digital streaming platforms, now this month we will get to watch movies in theatres.

So, here’s a list of films to look forward to this month…

After getting delayed multiple times, finally, Rohit Shetty’s Sooryavanshi is slated to release on 5th November 2021. The movie stars Akshay Kumar, Katrina Kaif, Ajay Devgn, and Ranveer Singh in the lead roles. Well, it is expected to take a bumper opening at the box office.

2005 release Bunty Aur Babli is undoubtedly one of the best comedies we have seen in Bollywood. And now, after 16 years, the makers are coming up with the sequel to the film titled Bunty Aur Babli 2. It stars Rani Mukerji, Saif Ali Khan, Siddhant Chaturvedi and Sharvari. The trailer of the film has impressed one and all. It will be interesting to watch if the audience will go to theatres to watch this movie.

Kartik Aaryan has mainly been a part of romantic comedies, but with Ram Madhvani’s Dhamaka he is coming out from his comfort zone and doing something totally different. The trailer has surely grabbed the attention of the audience.

The trailer of Satyameva Jayate 2 didn’t impress us much, but John Abraham fans are excited to watch him on the big screen in triple roles. The movie will be releasing on 25th November and it will be clashing with Salman Khan’s Antim during the same weekend.

Salman Khan and Aayush Sharma starrer Antim: The Final Truth is undoubtedly one of the most awaited films of the year. Khan’s fans are eagerly waiting to see him on the big screen, but well, Antim mainly concentrates on Sharma’s character, and reportedly Khan’s screen time in the film will be of around an hour. The trailer and the songs have created a good pre-release buzz and it is expected to do well at the box office.

Rajinikanth’s Annaatthe is all set to release on 4th November 2021. It’s Diwali and the superstar’s fans are super excited to watch him on the big screen. The trailer is entertaining and even songs are being liked by the audiences. So, Tamil movie lovers are surely in for a treat this Diwali.

After Mahanati (2018), Keerthy Suresh has proved that she can carry a film on her shoulder. The actress’ film Good Luck Sakhi is slated to release on 26th November and as it is directed by Nagesh Kukunoor we surely have high expectations from it.

Birthday Special: 5 actresses with whom Shah Rukh Khan’s pairing was loved by audiences the…

Birthday Special: 5 songs of Raveena Tandon that will instantly make you miss…

Birthday Special: Five Pan-India films of Prabhas set to take his stardom to…