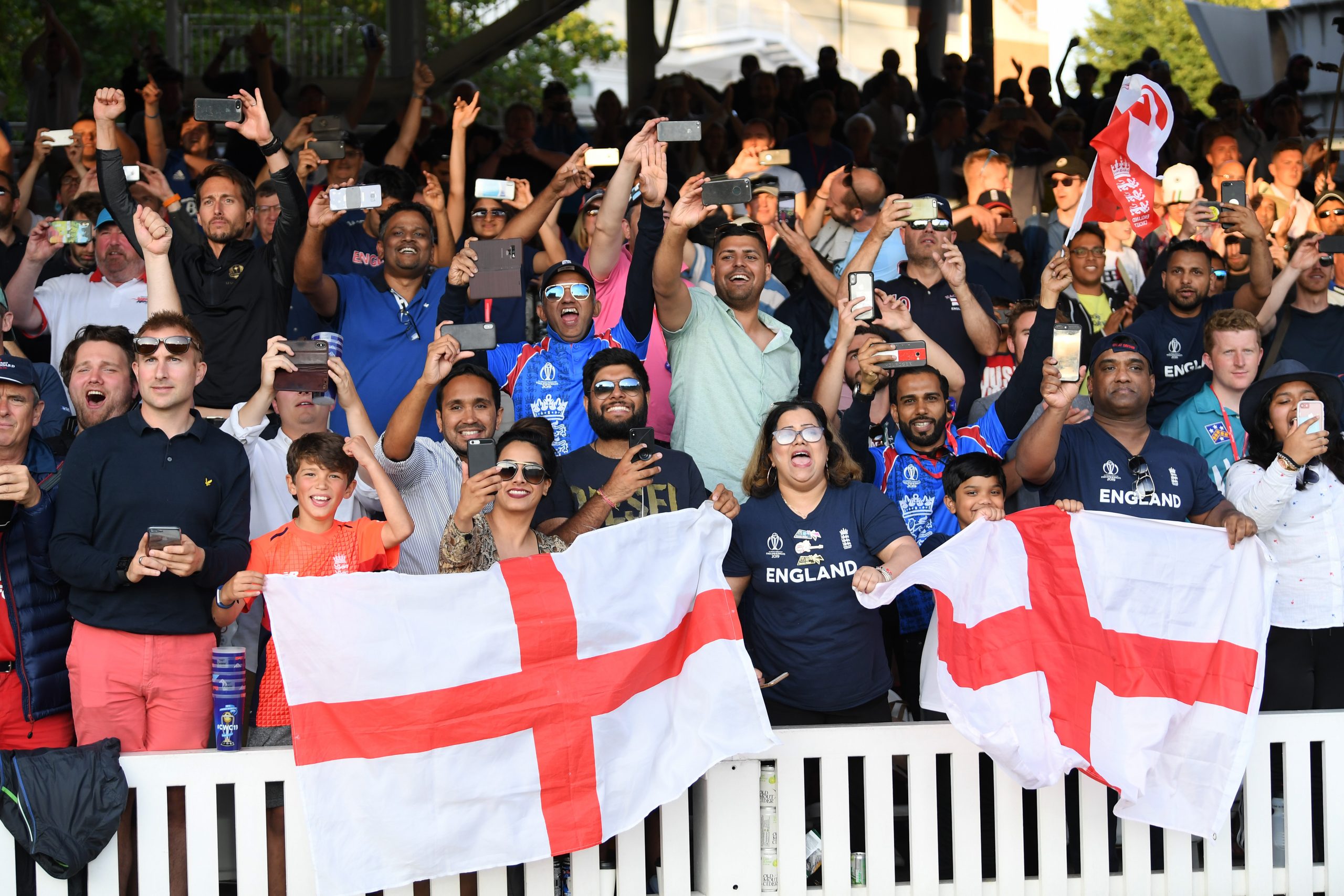 LONDON, ENGLAND – JULY 14: England fans during the Final of the ICC Cricket World Cup 2019 between New Zealand and England at Lord’s Cricket Ground on July 14, 2019 in London, England. (Photo by Mike Hewitt/Getty Images)

A NEW survey has revealed that people from ethnic minority backgrounds are hesitant to attend live sporting events because of fear over racial and physical abuse.

As many as 41 per cent of ethnically diverse fans, who responded to the survey, shared this opinion and 42 per cent of respondents said that they do not feel their culture is represented in sporting icons.

The survey, carried out by the London Lions basketball team and shared exclusively with Sky Sports News, obtained the views of 2,000 sports fans from different age groups and backgrounds.

Twenty-three per cent of respondents from diverse ethnic communities said they felt young black athletes are misrepresented in the media, in comparison to 13 per cent of white respondents.

The research revealed that divisions still clearly exist within sport. But they hope by speaking about it openly through their research can raise awareness and inspire change.

“More people are becoming aware of the difficulties that other races are facing. But at the same time there is still a lot of backlash to even acknowledging that racism is still here in 2021, when it is,” London Lions captain Joe Ikhinmwin, who is playing in his eighth season in a row with the team,told the Sky Sports News.

“Lots of people will try and say that it is not real and dispute that the experiences of other people don’t come down to racism, when they do. So I feel like that is a major issue.”

His team-mate Shane Walker has experience of playing across Europe as well as a successful period with Leicester Riders.

Walker said: “Eighty per cent of the league that I play in – the British Basketball League – is black. We just want to be represented fairly, which I don’t think we are. We are not given high-up positions, we are not given intellectual positions.”

According to the Sky Sports News report, the British Basketball League is in the process of setting up a forum for players. But it was the strength of feeling among those representing the London Lions that prompted the team to commission the research.

Lions fan Ish Gwegweni has highlighted the importance of diversity in different sports in the UK. “Whenever I personally see a black man in cricket, it’s like: ‘Wow, that’s incredible, someone that looks similar to me has made it this far’,” he said.

Ikhinmwin further said: “I feel like the media play a huge role in spinning whatever narrative they believe is right or whatever they believe is wrong. They have a responsibility as organisations that reach millions of people to paint a fair and equal picture for white athletes, black athletes … that is important. They play a massive role and I feel like there are lots of organisations that are not fulfilling it.

“When I was a kid I was into football and basketball and all sports. But whenever I asked my dad to go to a football game he wouldn’t want to take me. He would tell me about the experiences he had at football games and the things people have said and the type of abuse people like us and people from other backgrounds have suffered.”

The sporting world has certainly marked the Black Lives Matter movement in different ways. But the London Lions survey raises concerns about the fears fans from diverse communities have when attending live sporting events, the Sky Sports News report pointed out.