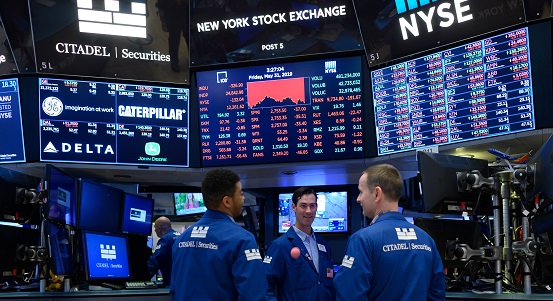 The media and entertainment firm in a regulatory filing on Monday (10) said: “The Eros board of directors believes the equity value of Eros International is seriously undervalued in the public markets; and accordingly, the board has approved a share buyback program of up to $20 million of outstanding common shares.” (Photo: DON EMMERT/AFP/Getty Images).

MUMBAI based Eros International has announced a share repurchase programme worth up to £16 million ($20m) on the New York Stock Exchange.

The media and entertainment firm in a regulatory filing on Monday (10) said: “The Eros board of directors believes the equity value of Eros International is seriously undervalued in the public markets; and accordingly, the board has approved a share buyback program of up to $20 million of outstanding common shares.”

“Share repurchases may be made at management’s discretion from time to time on the open market or through privately negotiated transactions. The repurchase program has no time limit and may be suspended for periods or discontinued at any time.

“Eros’ share repurchase program does not obligate it to repurchase any specific number of shares and may be suspended or discontinued at any time”, the company said.

Since the company went public in 2013 Eros has invested over $1.2 billion in content and generated over $970m in operating cash flow from operations. As a result of this sustained and prudent investment, Eros has one of the largest libraries of Indian films in the world including over 12,000 digital rights.

Group financial officer and president of North America Prem Parameswaran said: “Eros has a strong liquidity profile and healthy balance sheet with no meaningful near-term debt maturities. As of March 31, 2019, we had over $135m of cash and cash equivalents on our balance sheet and our net debt position was $145m”.

Eros Now platform has risen to 18.8 million paid subscribers and 154.7 million registered users as of March 31, 2019, far exceeding its target for the full fiscal year 2019 of 16 million subscribers.

The data represents a 138 per cent increase in paid subscribers over the past one year and an 18 per cent rise over the prior quarter.