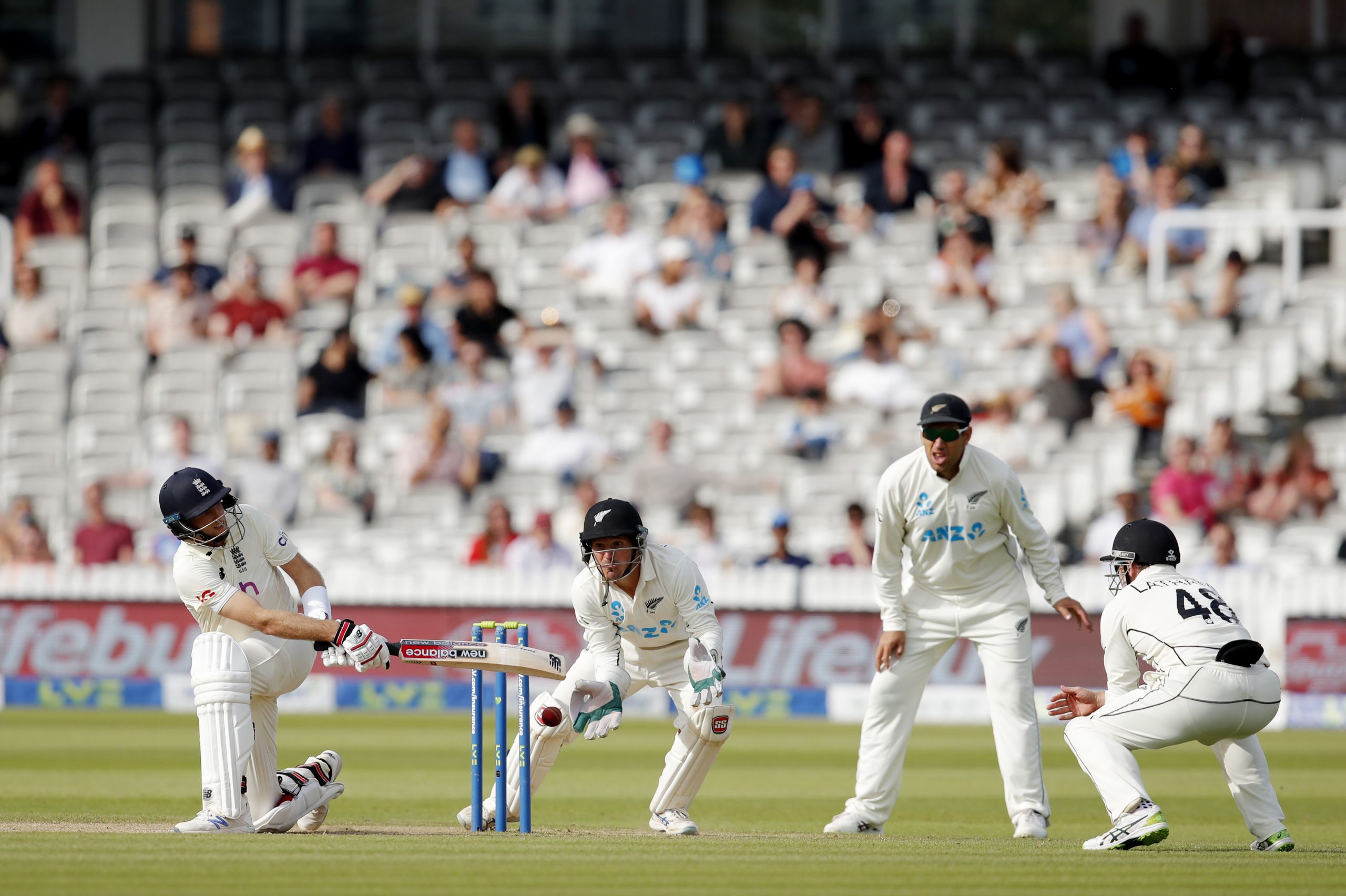 Joe Root plays a shot on day five of the first Test against New Zealand at Lord’s. (Reuters/Andrew Couldridge)

ENGLAND offered stiff resistance in the final session to secure a hard-fought draw against New Zealand on day five of the first Test at Lord’s on Sunday (6).

Having lost day three’s play due to rain, New Zealand skipper Kane Williamson made a bold declaration at 169 for 6 at lunch to set England a target of 273.

But England openers Rory Burns and Dom Sibley saw off the new-ball well in a bid to save the Test match.

Sibley spent over five hours in the middle for his unbeaten 60 off 207 balls, while Ollie Pope was unbeaten on 20.

The hosts finished with 170 for 3 in 70 overs before both sides shook hands on a draw late in the evening.

England captain Joe Root, who showed incredible patience for his 40 in the final session, said they adopted a cautious approach given the quality of the visiting bowling attack on a deteriorating surface.

“It was slow and hard to time the ball and get any sort of rhythm,” Root told the BBC. “You look at the target and amount of overs you have, it wasn’t quite as straightforward as that.

“Of course it will disappoint a few people but from our point of view, we’re very much in this series.

“We leave here level and give ourselves a great chance to win the series at Edgbaston.”

New Zealand may have missed an opportunity to grab the advantage over England ahead of the second Test at Edgbaston, but captain Williamson can take plenty of positives from Lord’s.

Devon Conway produced a masterful double hundred on debut, while Tim Southee and Kyle Jamieson proved difficult to contain with the new ball and combined for 10 wickets in the match.

“Special performance from Conway, a special player,” Williamson said. “He showed his class on his debut Test at the home of cricket.

“Special performance from Tim as well, he led the attack beautifully, and (the other) guys complemented him well. We had to be patient on this pitch, and we got rewards for that.”

Meanwhile, the England & Wales Cricket Board has suspended Ollie Robinson from “all international cricket” after a series of historical racist and sexist tweets were revealed as the pace bowler was making his debut on Wednesday.

Robinson, who picked up seven wickets in the match, has since apologised for his “thoughtless and irresponsible” social media posts.