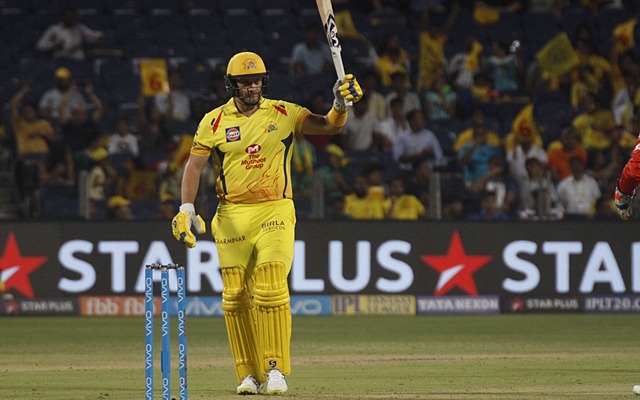 Chasing 148 for victory, Chennai rode on a 81-run opening stand between Du Plessis and Watson to achieve their target with an over to spare in the second qualifier in Visakhapatnam.

The Mahendra Singh Dhoni-led side set up a title clash with Mumbai Indians, who beat Chennai in the first qualifier earlier this week.

The two teams fight for supremacy on Sunday in Hyderabad with three titles each in the world’s most popular Twenty20 tournament that started in 2008.

Both Du Plessis, who made 50 off 39 balls, and Watson, who also smashed 50, started cautiously but took the attack to the opposition bowlers with some clean hitting.

“The way Faf got going, I could take my time getting into rhythm…I could take a couple more balls to find my feet,” Watson, 37, said after his team’s 100th IPL win.

“There’s huge positives about age and experience, and that’s the way CSK has played, from the top with MS (Dhoni) and Stephen Fleming (coach).

“We know what to do in different situations, we’ve made the most of our experience,” Watson said of his team that has been labelled as ‘Dad’s Army’ for having quite a few 35 plus players including their 37-year-old skipper.

The South African captain registered his 12th IPL fifty with the help of seven fours and one six but soon fell to New Zealand paceman Trent Boult.

Watson got to his half-century with a six off Keemo Paul before leg-spinner Amit Mishra ended the Aussie batsman’s 32-ball knock.

The two openers though were involved in huge mix-up in the first over when they were stuck in the middle of the pitch only to witness the Delhi fielders miss running them out on both the ends.

“I reckon I almost ran three there (the early run-out chance). I have to laugh at myself because it was terrible running,” said Du Plessis, who was named man of the match.

He was ably supported by fellow quick Deepak Chahar, spinners Harbhajan Singh and Ravindra Jadeja who all claimed two wickets each.