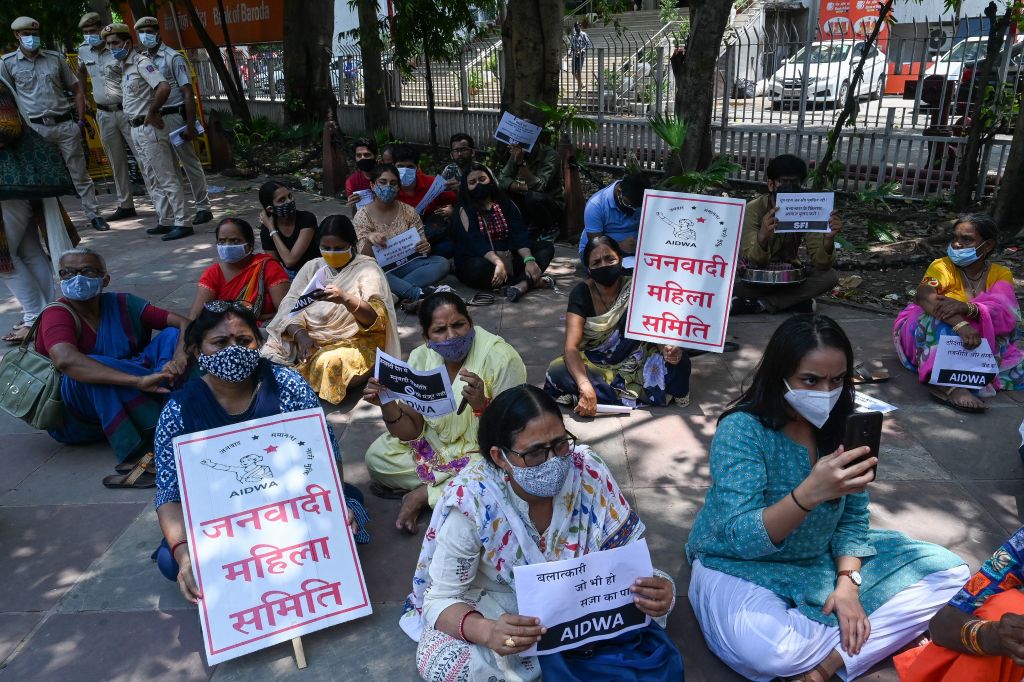 Activists of Student Federation of India (SFI) and All India Democratic Women’s Association (AIDWA) hold placards during a protest against the alleged rape and murder of a nine-year-old girl, in New Delhi on August 4, 2021. (Photo by PRAKASH SINGH/AFP via Getty Images)

A priest and three other men have been charged with the gang rape and murder of a low-caste nine-year-old girl, Indian police said, in a case that sparked days of protests in New Delhi.

The girl was allegedly assaulted by the priest, 53, and three workers on August 1 after she had gone to a crematorium to fetch water.

The four men, who have been in custody since they were detained in early August, face the death penalty.

The girl’s mother earlier told police the men called her to the crematorium and claimed her daughter was electrocuted.

They told her that if she reported the incident to police, doctors conducting an autopsy would remove her child’s organs and sell them.

Her daughter’s body was then cremated before some locals intervened and pulled some charred remains from the pyre.

The 400-page charge sheet from Delhi Police cited “scientific, technical and other evidence” and witness testimony, the government said in a statement.

It added that its push for charges to be laid within 30 days of the alleged incident reflected its “zero tolerance” of crimes against women and girls in the nation of 1.3 billion people.

An average of nearly 90 rapes of girls and women were reported in the country every day in 2019, according to data from the National Crime Records Bureau.

But large numbers of sexual assaults are believed to go unreported.

The case also highlighted the treatment of the 200 million-strong Dalit community, the lowest group under the country’s caste system.

The community has long faced discrimination and abuse in India. Activists say attacks against Dalits have increased since the start of the coronavirus pandemic.