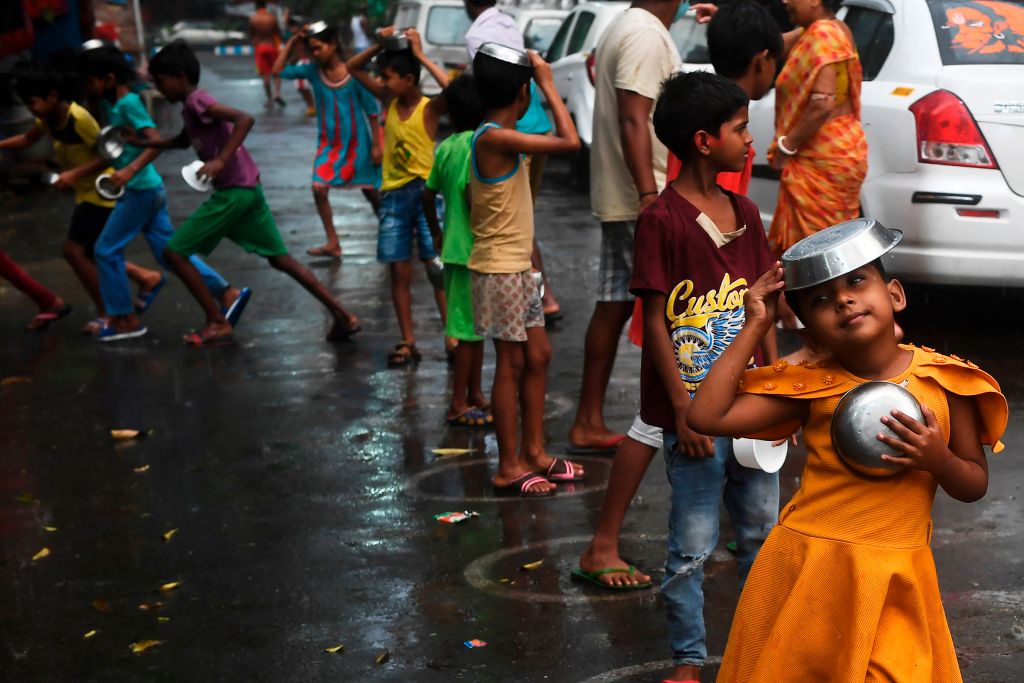 Children stand in queue to collect food as its rain, during a government-imposed nationwide lockdown as a preventive measure against the COVID-19 coronavirus, in Kolkata on April 12, 2020. (Photo by DIBYANGSHU SARKAR/AFP via Getty Images)

The death toll due to COVID-19 pandemic rose to 308 on Monday (13) in India after 35 new fatalities were reported, while the number of cases climbed to 9,152, according to the health ministry.

The number of active COVID-19 cases stood at 7,987, as many as 856 people have been cured and discharged, while one had migrated.

The total number of cases include 72 foreign nationals, according to the ministry data.

Thirty-five deaths have been reported since Sunday evening, of which 22 were reported from Maharashtra, five from Delhi, three from Gujarat, two from West Bengal and one each from Tamil Nadu, Jharkhand and Andhra Pradesh.

Of the total 308 deaths, Maharashtra tops the tally with 149 fatalities, followed by Madhya Pradesh at 36, Gujarat at 25 and Delhi at 24. Punjab and Tamil Nadu have registered 11 deaths each, while Telengana reported nine fatalities.

Seven people have lost their lives in West Bengal and Andhra Pradesh each, while six deaths were reported in Karnataka. Uttar Pradesh has reported five fatalities, Jammu and Kashmir has four, while Haryana and Rajasthan have recorded three deaths each.

Two deaths have been reported from Kerala and Jharkhand. Bihar, Himachal Pradesh, Odisha and Assam reported a fatality each, according to the ministry data.

Thirty-five people were infected with the virus in Uttarakhand, while Assam has 29 patients, followed by Himachal Pradesh with 32 cases.    Chhattisgarh has 31 cases, Chandigarh has 21, Jharkhand has 19 and Ladakh 15, while 11 cases have been reported from the Andaman and Nicobar Islands.

Goa and Puducherry have reported seven COVID-19 infections each, Manipur and Tripura have two cases each, while Mizoram and Arunachal Pradesh have reported a case each.