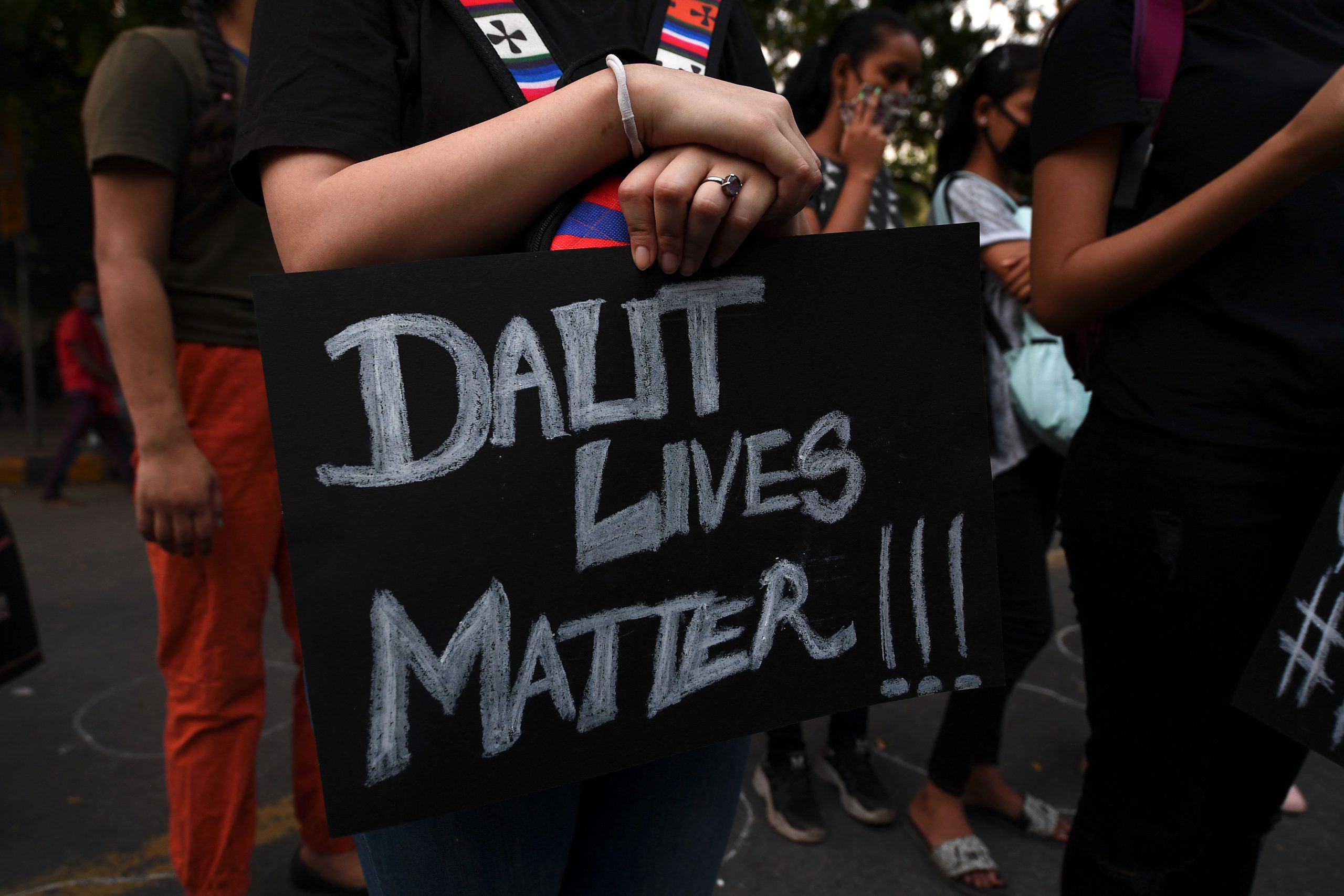 A demonstrator holds a placard reading ‘Dalit Lives Matter’ during a protest against the alleged gang-rape and murder of a 19-year-old woman in Uttar Pradesh state, in New Delhi on October 4, 2020. – India’s federal investigators will take over the probe into the alleged gang-rape and murder of a low-caste teenaged woman that has sparked nationwide outrage and days of protests. (Photo by Sajjad HUSSAIN / AFP) (Photo by SAJJAD HUSSAIN/AFP via Getty Images)

A winner of industry awards, Snehapoo Padavattan should have raced up India’s corporate ladder. There was just one problem. She belongs to the country’s lowest caste, the Dalits.

At 35, the Chennai-based communications executive has been forced to repeatedly change jobs to escape persistent discrimination and has battled stress-related health issues.

A sixth of India’s 1.3-billion population are Dalits, whose low status in Hinduism’s hereditary social hierarchy exposes them to daily violence and abuse.

India’s president Ram Nath Kovind is Dalit, as was BR Ambedkar, architect of its constitution, yet as researchers, activists and HR professionals reveal, caste-related stigma remains pervasive across the corporate sector.

The centuries-old scourge has even hit Silicon Valley, where tech giant Cisco is facing a caste discrimination lawsuit.

With a master’s in communications, Padavattan — not her real name — seemed set for the fast-track when she joined one of India’s oldest conglomerates in 2008.

But as soon as upper-caste colleagues realised that she belonged to a community once considered “untouchable”, the taunts began, she told AFP. By the age of 29, she already had high blood pressure from stress.

“India lives and breathes caste. Whether you realise it or not, your caste is chasing you from the time you are born,” she said.

A senior colleague called her a peasant for dropping a fork while others from the traditionally vegetarian Brahmin upper caste berated her for eating beef.

– Stranglehold –
A belief in so-called upper-caste purity — enforced through religious rituals, food habits and segregationist practices — has long been central to Hinduism.

Dalits were barred from temples and schools and forced into “unclean” jobs such as sanitation.

In 2009, Indian and US academics conducted a hiring experiment and found that candidates with upper-caste surnames were nearly twice as likely as Dalits to be called for interviews.

A 2012 study by Canada-based researchers said that 93 percent of board members in India’s top 1,000 businesses belonged to upper castes, which make up less than 15 percent of the population.

And last year, a US study of 4,005 leading Indian firms found that Dalits and other marginalised groups accounted for just three out of 35,000 directorships.

Few Dalits ever make it as far as Padavattan, who lost promotions to junior colleagues and was advised to leave by some HR managers.

Even multinational firms revealed the same rot, she said.

“The trouble with the diversity and inclusion initiatives in these companies is that it is all lifted from foreign contexts,” said Christina Dhanaraj, who advises social media platform Smashboard on caste diversity.

Multinational firms are “looking at gender and sexuality, but not caste”, she told AFP.

“It is hard enough to get hired as a Dalit, much less rise in a corporate hierarchy dominated by upper castes.”

Dalits are at such a disadvantage that many hide their identities, she added.

Most are reluctant to speak out, fearing reprisals. When AFP reached out to Dalit professionals, nearly all declined interviews.

– Invisible inequality –
The issue is exacerbated by the refusal of India’s private sector to maintain caste data.

“This ensures you have no sense of the magnitude of the problem. It reinforces inequality,” said Hari Bapuji, professor of strategy and international business at the University of Melbourne.

Many Indians believe caste discrimination only exists in remote villages, not in their everyday life.

Even affirmative action, aimed at helping lower-caste groups access higher education and government jobs, is used as a weapon against its beneficiaries, fuelling the notion that they are less qualified.

Indian industry has largely resisted affirmative action-based hiring, saying it would hurt competitiveness, and focused on providing scholarships and training to marginalised youth.

Sougata Choudhury, who handles affirmative action initiatives for the Confederation of Indian Industry, denied there was caste discrimination. “Companies have to be allowed to work instead of pushing some inclusion agenda,” he told AFP.

– Wake-up call –
But experts such as Bapuji say diversity is crucial “if businesses want to understand the needs of the market and grow”.

The lawsuit against Cisco could prove a wake-up call for Silicon Valley, where more than 250 Dalits have contacted civil rights group Equality Labs to report discrimination at companies including Google, Facebook and Microsoft.

In India though, few are holding their breath.

“But we have to keep fighting.”