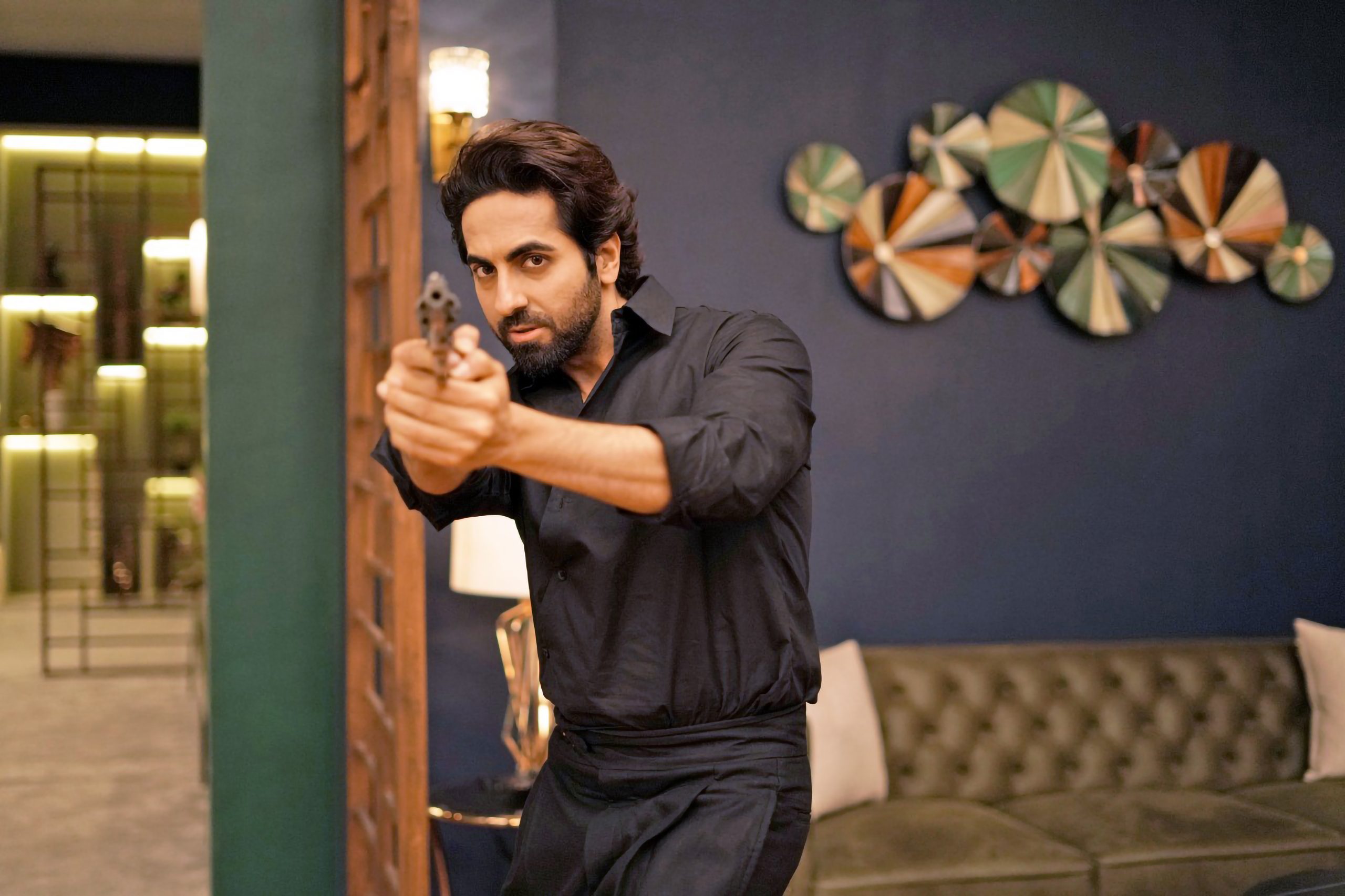 Taking Risks: Ayushmann Khurrana in An Action Hero
Follow Us

ACTOR DISCUSSES HIS LATEST MOVIE AND WHY HE LIKES TAKING RISKS

Ayushmann Khurrana has become known for making different choices as an actor, irrespective of the results.

In his decade-long career, the unconventional actor has played a variety of characters, including a sperm donor in his debut film Vicky Donor (2012), someone suffering from erectile dysfunction in Shubh Mangal Saavdhan (2017), a homosexual in Shubh Mangal Zyada Saavdhan (2020), a pianist pretending to be blind in Andhadhun (2018), and a hypermasculine bodybuilder, who falls for a transgender girl in Chandigarh Kare Ashiqui (2021).

In recent release Doctor G, he portrayed a gynaecologist, and in this week’s big Bollywood cinema release An Action Hero, he ventures into new territory again with another unique role. He portrays a movie action hero, who finds himself in the middle of a real-life thriller.

In a candid interview with Eastern Eye, Ayushmann revealed why he waited for 10 long years for an action film and took a month to greenlight it. The multi-award winner also spoke about his future plans and how his process of script selection has changed post pandemic.

Like always, you seem to be portraying a different kind of role in An Action Hero. Tell us something about your character and preparations for it?
As the title says it all, I am playing a hero, an action hero, to be more precise. His name is Manav. And yes, it is a different character in many ways. Physically, this has been the toughest for me after Chandigarh Kare Aashiqui (2021). I trained for eight months for MMA. While I was shooting for Doctor G (2021), I was preparing for An Action Hero. Yeah, it was physically very tough. It’s kind of my reinvention and after 10 years, with an action film, so feels great.

It is physical, but was it emotionally taxing for you in the film as an actor?
More than emotionally, it was physically taxing. I shot this film immediately after recovering from Covid. I think it was the second day of my recovery and I was doing some action scenes. So that was the toughest part. And, of course, physically it is quite risky. In fact, every action film is.

You play an actor in the film. Have you used your own professional experiences in the film?
I have not used any personal experiences, to be honest, because Manav, the superstar, is very arrogant. He is flamboyant. He wears stardom on his sleeve, and I am completely not like that. So, it is topical in a way because the way the media currently is, the people are, and there are lot of trends going on like #BoycottBollywood. That fickle nature of media, Bollywood, and people put together is what the film is. It’s a very new-age concept, which is very relatable and topical to whatever is happening in the world right now.

Is there any message you want to convey to the audience through this film?
There is no message as such in this movie. It is just entertainment, thrill, and topicality – that’s about it.

How much of the action has been performed by you and how much of it is done by your body double?
Every film has used body doubles in some or the other way. It is difficult to encapsulate everything on your own because there are professionals doing that. So there has to be like 10 per cent usage, if not more because you cannot shoot wide shots. Probably you are shooting something else, and your body double is making it up for you by shooting the wide shots. It is just practical.

What was your first reaction when you came to know about this action movie?
I think the film worked as anti-casting because the usual action hero doing this film would have been no fun. Since I am there in the film, I am such a different person and coming from social dramedies to an action-hero film. It just makes the project more exciting, and it’s not just about changing myself or my image as an actor. It has to do with the subject and how different this action movie is from others. It’s not just action, there is a story, thrill, and comedy. Everything is there. So, for me, I think it’s my most commercial film.

How was the experience of working with actor Jaideep Ahlawat?
I think it’s very important to have a strong antagonist in a film. Jaideep Ahlawat completes me in this film, I think. It’s very important to have an actor who is like a powerhouse of a performer like Jaideep Ahlawat. It was my insistence that he be in the film because he takes all the right pauses and is a great value addition to the film. It was difficult to get his dates because he was so busy after Pataal Lok. So, I was like I will adjust my dates, but we have to have him in the film.

The director Anirudh Iyer told me you took one whole month to say yes to the film. What was going on in your mind?
This is my first post-pandemic choice, so I had to take my own sweet time to discover everything, every aspect of the script and give my own input. So, I took my own sweet time. I was always in love with the script since the beginning.

How many times were you injured during filming?
I think a couple of times. I got injured while shooting Andhadhun (2018) too. Because whenever there are things thrown at you, you do get injured. During Chandigarh Kare Aashiqui too I was injured. We sell emotions as actors but in these types of films, physicality also.

Do you think post the pandemic, the audience is choosier and more selective about viewing a film, and what has your observation about this been?
Yes, you are right. It takes a lot more to make them come out of their homes
because everything is on their mobile right now.

Does that affect your choice of films?
I have to give up on taboos for a while. But I can’t give up on quirk, and this is my first post-pandemic choice, which is slightly more promotional in tonality. So, if you have love for theatres, like I have grown up watching films in theatres, it has a certain charm. Of course, I am not averse to doing content on OTT also. So, you just have to make the right choice for the right medium. Like, I may have a different take on my previous films also, on the medium, but it’s eventually the producer’s decision because it’s their money. 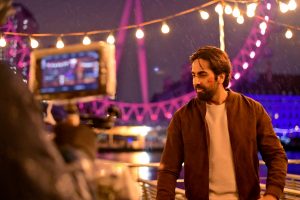 How was it working without a heroine for the first time?
(Laughs) It does not matter actually. You have to be true to the story, and I think probably we will be appreciated for not diluting the concept of the film with a romantic track, you know. It was not required.

There is a fanbase that expects certain things from you. When you said yes to this film, did you feel any doubt that you are doing something different from what fans expect and whether it’s the right choice?
A lot of people also said that this film gives a very ‘Andhadhun’ vibe – the kind of tonality the film has. But I am not going away from my genre. As I said, it’s not taboo, it’s quirk, and quirk will take me to the wider audience. If you divide the content from taboo, so I think it’s still in my genre of experimentation, taking risks or maybe giving something different to Hindi film watchers. Yeah, the elements are still there.

What is the high or joy you get by taking risks in your choices of films?
I don’t know. I take one step at a time, one day at a time, one film at a time. But one thing is for sure, history will be kind to me and whenever I look back from now, I will be noticed as the first person to do a certain subject or choose a certain film. So, I think that will be very gratifying.

Any specific genre that you still wish to work on?
I have said earlier also that horror comedy is one such space I want to explore. And luckily, that may happen, of course, with Dinesh Vijan and Amar Kaushik as they are building this universe of great horror comedy. If you want to work on some genre, then there has to be something different for me in it. I waited for 10 years for a good action film. I was offered loads of action films in the past, but An Action Hero was something unusual.

How do you feel as you inch closer to the release date of the film?
It feels as if my class 10th results are yet to be out. It is always the same feeling whenever a new film is about to release. It is mix­ed feelings of excitement and nervousness.

An Action Hero is in cinemas now