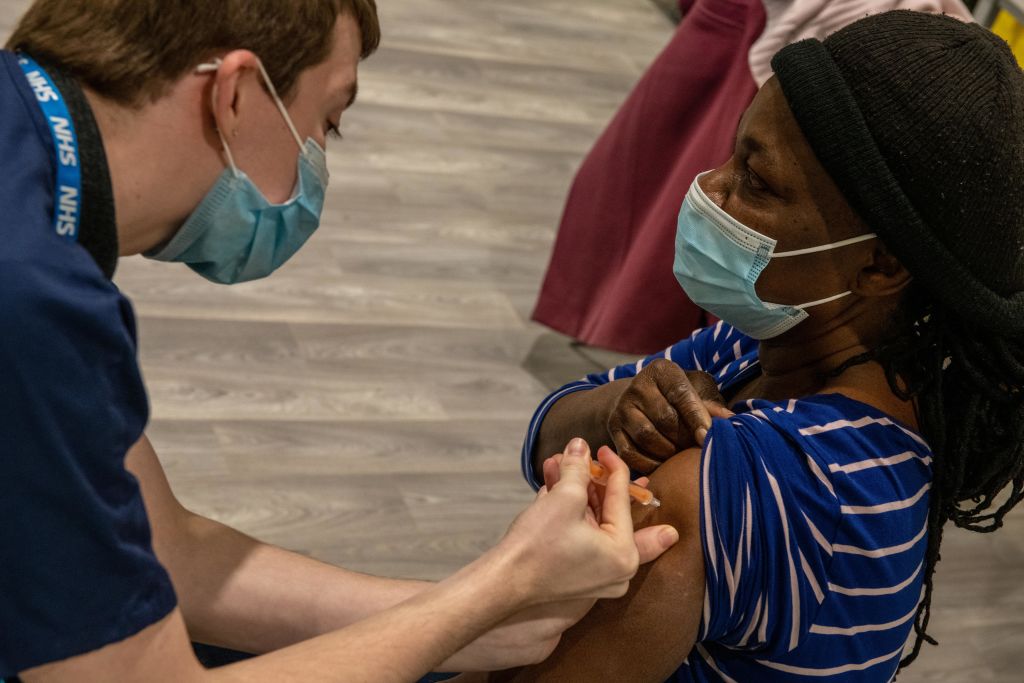 FILE PHOTO: A woman has the AstraZeneca vaccine administered into her arm at a vaccine centre in Battersea Arts Centre on March 8, 2021 in London, England. (Photo by Chris J Ratcliffe/Getty Images)

TO increase the diversity of participants, AstraZeneca is planning to allow more people take part in clinical trials from their homes, The Guardian reported.

Recruiting volunteers to clinical trials is a crucial step in the development of new drugs, tests, devices and other interventions.

Diversity among trial participants is crucial, as genetic, social, and cultural factors can all affect the way different groups respond to interventions.

According to experts, lack of diversity among people participating in clinical trials means drugs and medical equipment may be less effective in certain groups.

Last week, UK health secretary Sajid Javid announced a review into systemic racism and bias in medical devices to examine why people of colour and women have worse health outcomes.

Cristina Durán, chief digital health officer, R&D, at AstraZeneca told The Guardian that typically only 3 per cent to 5 per cent of eligible patients choose to join a clinical trial, with recruitment taking as long as 18 months.

Early trials of Covid vaccines were criticised for predominately involving white participants, despite the virus having a disproportionate effect on people of colour, the newspaper report added.

A lack of diversity in clinical trials has also been cited by the nonprofit organisation breastcancer.org as one of the potential reasons Black women in the US have worse breast cancer outcomes than other groups.

According to Durán, the company had sought to delve into the issue of recruitment, by carrying out interviews with patients before the pandemic.

“The feedback was mainly that it was very burdensome for patients to participate, because it did require for them to travel to a hospital or site, to spend quite a significant number of hours at that site, either waiting or having the procedures done to collect the data. Historically about 90 per cent of such data was collected at such locations,” Durán was quoted as saying by The Guardian.

“We reviewed close to 100 protocols – those are the instructions of how to run clinical trials – and 70 per cent of that data could be collected at home.”

Heart rate and activity are among metrics that can be monitored at home and it is also possible to take blood samples and evaluate lung function.

Phillippa Brown, vice-president of development operations, R&D, at AstraZeneca has said that among other approaches to increase participation of minority populations, the company has been increasing the diversity of investigators on clinical trials to build trust with local communities.

Stephen Evans, professor of pharmacoepidemiology at the London School of Hygiene and Tropical Medicine said “increasing diversity in trials is something that virtually every trialist wants to do”.

“People may not make the measurements as carefully as they are made in a clinic. It was also extremely important participants were unaware of the treatment they have been given – for example whether it was an active drug or a control. Otherwise the biases could become very substantial,” he told The Guardian.