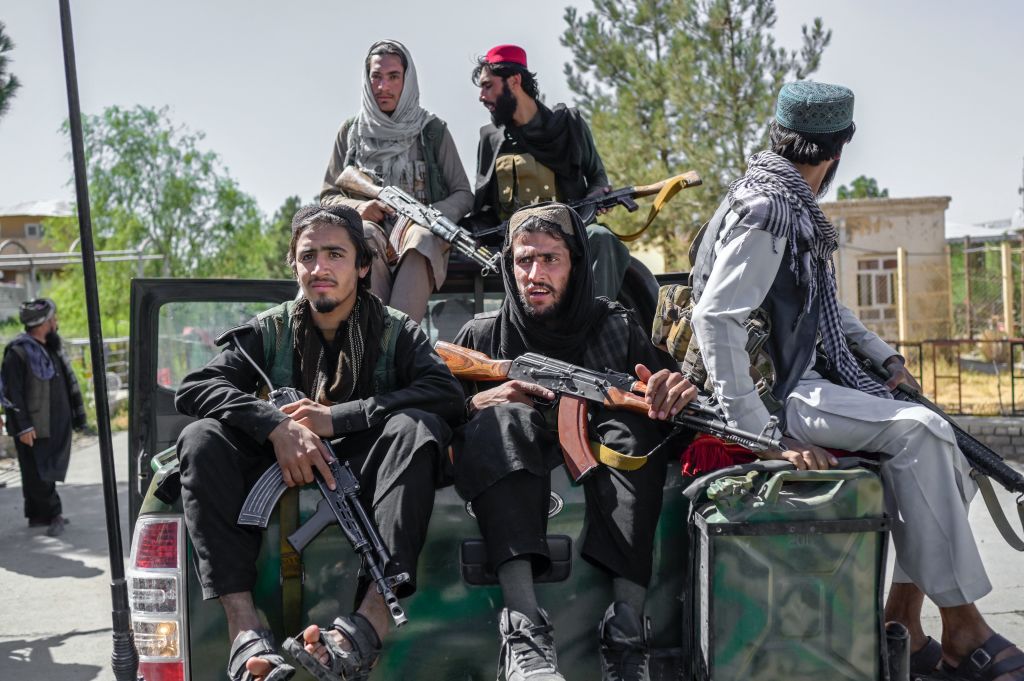 Members of the Taliban drive in the Pul-e-Charkhi prison in Kabul on September 16, 2021. (Photo by BULENT KILIC/AFP via Getty Images)

THERE is, of course, a risk that some of the violent politics of Afghanistan will spill over on to the streets of Britain.

Those refugees coming to Britain from Afghanistan will include people strongly opposed to the Taliban. If they set up opposition groups in Britain, supporters of the Taliban, both in this country and abroad, are then likely to hit back. There is also the chance some impressionable people in Britain will be inspired by the Taliban’s victory and take up terrorism.

The warning from assistant commissioner Neil Basu, head of counter terrorism at Scotland Yard, has now been echoed by Ken McCallum, director-general of MI5, who revealed last week that 31 “late-stage” terror attacks had been foiled over the past four years. Six of them so far had been during the pandemic.

He also disclosed that smaller-scale terrorist acts by those already in the UK made up the largest number of threats faced by MI5.

“There is no doubt that events in Afghanistan will have heartened and emboldened some of those extremists and so being vigilant to precisely those kinds of risks is what my organisation is focused on along with a range of other threats,” he said.

But there is still also a risk of an increase in larger plots directed by terrorism groups like al-Qaeda, he warned. The BBC’s security correspondent, Gordon Corera, said, “Recent events have raised concerns that the jihadist threat could evolve once again, with Afghanistan inspiring people to act, or by the western withdrawal creating a new safe haven for groups to operate in and plan more sophisticated attacks, as they did in the years around 9/11”.

Sir John Sawers, who spent five years as the chief of MI6, said much the same thing as Basu: “I do think the terrorist threat is a notch greater today than it was when we were able to operate in Afghanistan. That’s for two reasons; I think, first, because of the risk that we will not be able to monitor terrorist groups and take action against them in Afghanistan itself. But I think perhaps the more immediate risk is that those extreme Islamists, violent people who take
inspiration from the Taliban success in Afghanistan, might take it into their own hands to carry out attacks.”

In Kabul last week, the Taliban had to break up a demonstration by men and women who shouted, “Death to Pakistan”. This is because they believe elements in the Pakistan military, notably the ISI (Inter-Services Intelligence), helped the Taliban come to power, although this is denied by prime minister Imran Khan’s government.

But this allegation has also been made by many security chiefs and politicians both in the US and the UK. However, it is also the case that the west will need Pakistan to try and persuade the Taliban to be more accommodating. And Pakistan for its part will want to ensure that India has no role in Afghanistan.

Emma shows what it means to be British

AFTER Emma Raducanu’s astonishing win in the US Open, perhaps the most relevant and profound remark was made by the Labour MP, Rosena Allin-Khan, who said: “Emma Raducanu’s parents are Romanian and Chinese, she herself was born in Canada but she still proudly identifies as British. Remember this, being British can comprise a real mix. It’s why we must be an open and
welcoming country.”

It was an important comment, given there were remarks in the media such as, “When did Canada become Britain, well done in winning, but your (sic) not from the UK,” and “Congratulations but you aren’t a Brit.”

Emma was born on November 13, 2002, in Toronto to Ian and Renee, who originate from Bucharest, Romania, and Shenyang, Liaoning, China, respectively. Her parents moved to Britain when she was two. She started playing tennis at five. She went to Newstead Wood School, a selective grammar school in Bromley and recently got an A* in mathematics and an A in economics in her A-Levels.

Her opponent, Leylah Fernandez, against whom Emma has played since they were 12, was born in Laval, Quebec, Canada, on September 6, 2002. Her father Jorge is from Ecuador and her mother Irene (née Exevea) is a Filipino Canadian.

In the Toronto Star, commentator Rosie DiManno said: “The whooping Brits will
be insufferable, basking in the glory of their first female Grand Slam champion in 44 years. You know, though, Raducanu, who was born in Toronto two months after Fernandez was born in Montreal, has a Canadian passport and dual citizenship. Canada could, if we wanted to be really mingy about it, claim Raducanu as our own, at the very least get all co-proprietary about it. Nah.
We’ll stick with Fernandez and revel in a marvellous tournament that ended one stride short of the triumphant finish line.”

Cristian Poepscu from Romania’s Digi 24 TV network pointed out: “The only
thing we can say is Romanian, without any hesitation, is her name Raducanu.”

Perhaps what we can say without any hesitation is that Emma’s win should help in the evolution of an inclusive, multicultural Britain.

I AM glad to see the comedienne Shazia Mirza hasn’t lost her sense of humour. She was asked by the “Fame & Fortune” slot in The Sunday Telegraph’s “Money” section last weekend (12) if she was saving for her retirement.

“My husband’s my retirement plan,” she joked. “I haven’t got one yet, but that’s what they’re there for.”

I have known Shazia ever since she started doing stand-up. The first time I saw her was at the Hackney Empire. It was just after 9/11 when Saudi pilots had flown into the Twin Towers in New York. Shazia managed to make a joke out of that. She came on stage wearing a hejab and said in a dead pan voice: “My name’s Shazia Mirza – at least, that’s what it says on my pilot’s licence.”

When I wrote up the story for the Daily Telegraph, my news editor admonished me: “This is racist.”

I became the Shazia correspondent for the paper. Years later when I wrote another story for the paper – Shazia was going to do her first tour of India and intended to make fun of jihadis – the news editor called out: “Don’t forget to put in that old joke.”

Shazia, now 39, told the “Money” section that she was a “saver” and had invested in property. “Yes, I own three properties: a maisonette in Walthamstow I bought for £89,000 (now worth £300,000) when I started teaching and managed to get a mortgage,” revealed Shazia, who began as a science teacher.

“I couldn’t afford to pay it after two months, so I rented it out and lived somewhere really cheap. When I started comedy, I bought another house in Muswell Hill in 2008 for £250,000 which I lived in. And recently I bought the flat in Belsize Park I’m living in now, which cost more than £500,000.”

Shazia has clearly been prudent. Her best paid show was “a seven-minute gig on Swiss television in 2007 for £25,000”.

I have no doubt she would agree to pay a 10 per cent commission to anyone who helps her achieve her retirement plan.