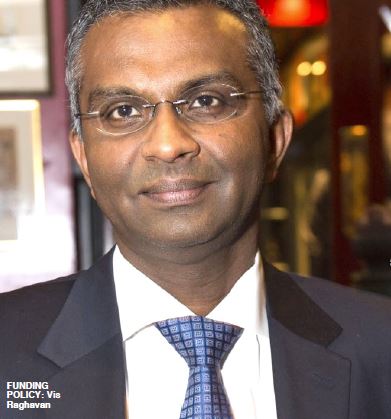 Raghavan was already co-chief executive and head of banking for the region, as well as lead for liaising with regulators on JP Morgan’s Brexit strategy.

“It’s very nice, very flattering. A privilege and an honour,” he said.Born in India, Raghavan graduated from the University of Bombay, where he read physics. He is an honorary Brummie – despite being a devoted Arsenal supporter – having attended graduate school at Aston University (electronic engineering and computer science), and was “genuinely pleased” to be awarded an honorary doctorate from his UK alma mater in 2016.

The fact that he worked as a systems engineer for General Signal, a technology and manufacturing company, while studying in Birmingham probably reveals an important quality that has made Raghavan such a success in the financial world.

That is in addition to qualifying as a chartered accountant at EY (or Ernst & Young as it then was).Being a systems person, he could problem solve and use his technical skills to do so, an ability would stand him in good stead.

It is rare to have such a combination – mastery of the technical and being able to manage – higher up on the career ladder, normally.This ability to be both technical and creative is something Raghavan explicitly values. “For me, banking is the perfect marriage of quantitative skills and real-life business situations,” he says.

“You’re at the cutting-edge of strategic thinking, you are involved in projects that allow you access to the boardrooms of the largest companies in the world. There is immense satisfaction and pleasure that comes from helping clients, companies, investors, governments and supranationals, with their strategic business and funding