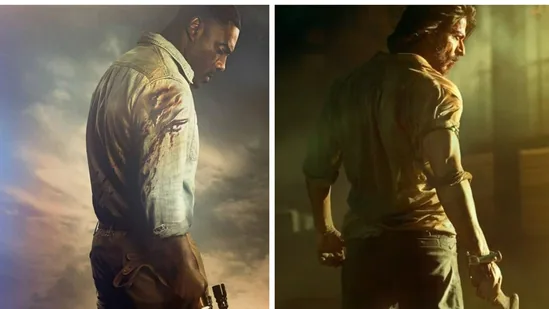 After staying away from the silver screen for four long years, Shah Rukh Khan will be back in and as Pathaan. The motion poster of the much-anticipated film was unveiled amid much anticipation on Saturday.

In the poster, Khan is seen wielding a shotgun with his back towards the camera and his face being partially visible.

However, while many of his fans were happy to see the poster, some noticed how it had a stark resemblance with the poster of Idris Elba‘s Beast. However, there are many who felt that SRK did it better.

A user on Reditt wrote, So, as you guys know Pathan’s first movie poster was released today (June 26), and within a matter of minutes people on Twitter started sharing this image, and stating how YRF can’t even make an original poster and has to copy Hollywood for it. Imo, there may be similarities between the two, but I think SRK’s poster looks much better, and it might be that the YRF’s marketing team already had a similar vision on how the movie’s poster should look rather than them blatant copying the Hollywood’s one. Guys, What are your thoughts on this?”

Taking his side, a Reddit user said, “It’s a pretty common pose TBH, and I don’t think it’s original for either of these 2 projects. YRF should have been smarter though, if recently the Beast one has come out before just modify yours so as to avoid such issues.” Another wrote, “Holy cow! It’s a really generic poster! Many action movies have the main character in such a pose! There is no single source of copying lol.” One more said, “That pose is a little too generic to say this definitively. Maybe they copied but I wouldn’t care.”

Pathaan, which has been in production for quite some time, is directed by Siddharth Anand. In addition to Shah Rukh Khan, the film also stars Deepika Padukone and John Abraham in lead roles. SRK also has Dunki and Jawan in the pipeline.