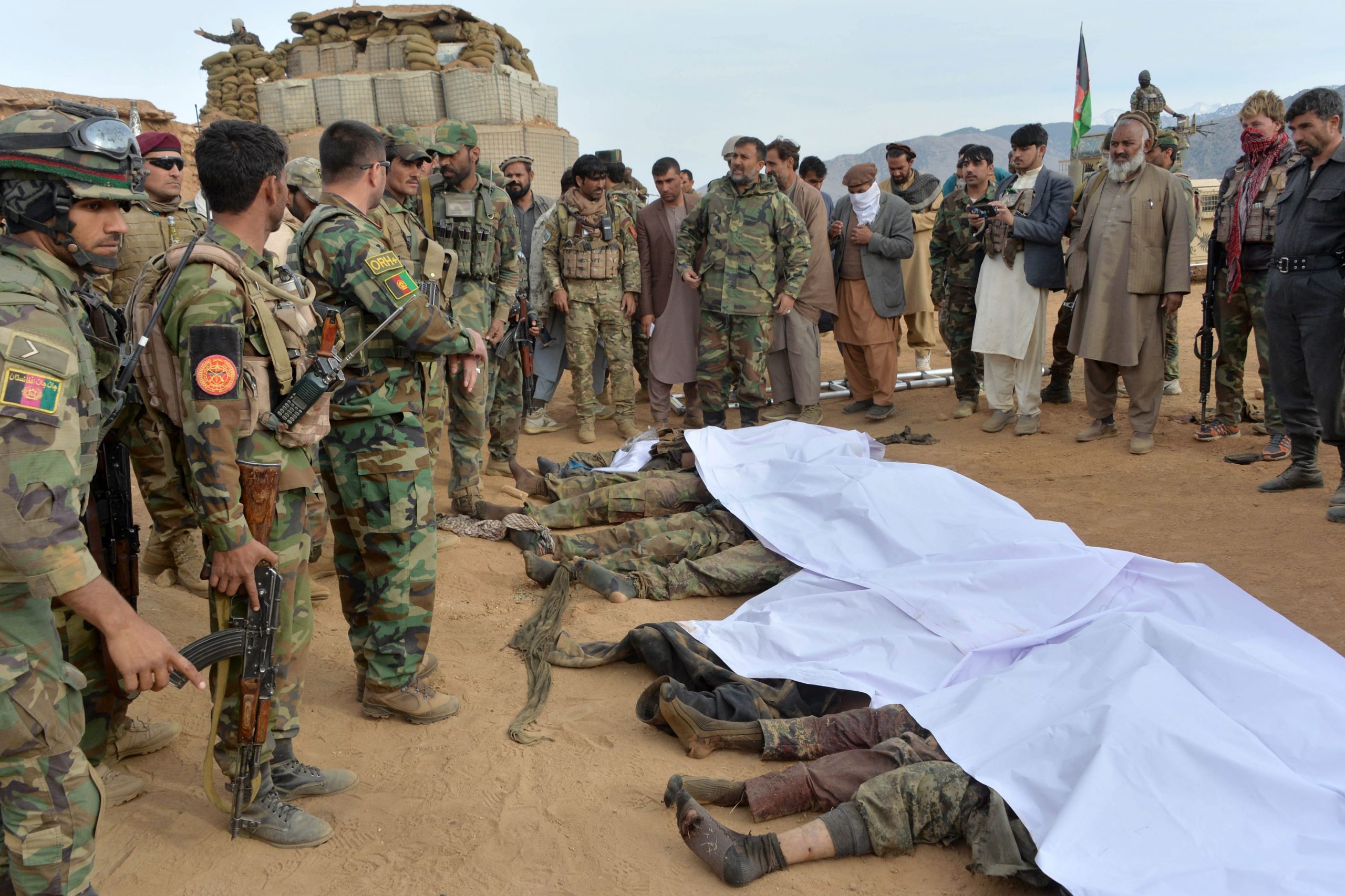 Afgan security forces gather around the bodies of Taliban militants killed during fighting and air airstrikes, in Khogyani district of Nangarhar province on February 12, 2021. (Photo by NOORULLAH SHIRZADA / AFP)
Follow Us

The last time Abdul Rasheed’s family saw him alive was in May, when the young Pakistani left for Afghanistan to fight for the Taliban. He returned home last week in a cardboard coffin.

The militant group is waging an offensive across Afghanistan’s countryside, snapping up territory and leaving the Afghan forces facing a crisis with the US and NATO all but gone.

Many Pakistanis, inspired by religious faith or community pressure, have joined the fight across a border that doesn’t distinguish between the Pashtuns who live either side.

“Rasheed sacrificed his life for a great cause,” Rasheed’s uncle, Maroof Khan, a Muslim cleric, told AFP over the phone from his home on the outskirts of Peshawar, just a few hours from the Afghan border.

Throngs of people visited to congratulate the family after hearing news of the 22-year-old’s death.

“He went there with a spirit of jihad. Now his young friends want to be martyred like him,” Khan added.

Pakistan’s interior minister earlier this month publicly acknowledged that the families of Afghan Taliban fighters were living in the country’s capital, while members of its rank-and-file were brought to the country for medical treatment or to be buried.

Pakistan has a long, complicated history with the Taliban.

Since fleeing the US invasion of Afghanistan in 2001, the group’s leaders have been largely based in Pakistan, where they have been allowed to regroup, recruit and manage the insurgency from the safety of Pakistani cities.

The issue is a particularly sensitive one for Islamabad, which has long been accused of supporting the hardline fundamentalists even while battling a Taliban offshoot within its own borders.

The Afghan and US governments have begged Islamabad to bring the leadership to heel and force the Taliban to hammer out a peace agreement.

The Taliban emerged in the southern Afghan city of Kandahar during the civil war that followed the Soviet withdrawal from the country.

But its ranks were filled with tens of thousands of Afghan refugees who had fled to Pakistan. Some Pakistani nationals also joined.

Security analyst Tahir Khan told AFP that authorities had more recently clamped down on people crossing to fight in Afghanistan, but the porous border in the rugged countryside meant some still made it.

“The number of Taliban fighters from Pakistan is much lower than in the past,” Khan said.

“Now the Afghan Taliban are so numerous they don’t need fighters from Pakistan.”

Many — including Rasheed — had graduated from Dar-ul-Uloom Haqqania madrassa near Peshawar, which was given the nickname the “University of Jihad” for its fiery ideology and the number of Taliban fighters it has produced.

For decades, Pakistani madrassas have served as incubators for militancy, indoctrinating tens of thousands of refugees who have few other options for education than the fire-breathing lectures from hardline clerics.

Rather than crack down on the institutions, successive governments in Islamabad — who rely on the support of Islamist parties in coalition governments — have largely given the madrassas a free hand.

Rasheed’s family do not know exactly when or where he died, only that it happened somewhere in eastern Nangarhar province.

There were chaotic scenes in Rasheed’s hometown when his body was brought back.

Video clips posted to social media and confirmed by his family showed hundreds of people clamouring to touch his coffin and chanting religious slogans, some waving Taliban flags.

Khan, his uncle, was later arrested and handed a two-week jail sentence.

He was charged with organising an illegal gathering and propagating terrorism, a police spokesman told AFP.

As visitors continued to pay their respects this week, Rasheed’s father Nasir Khan sat on a traditional wooden charpoy bench, wearing glasses along with a flowing white beard.

“I pray that Allah accepts the martyrdom of my son.”