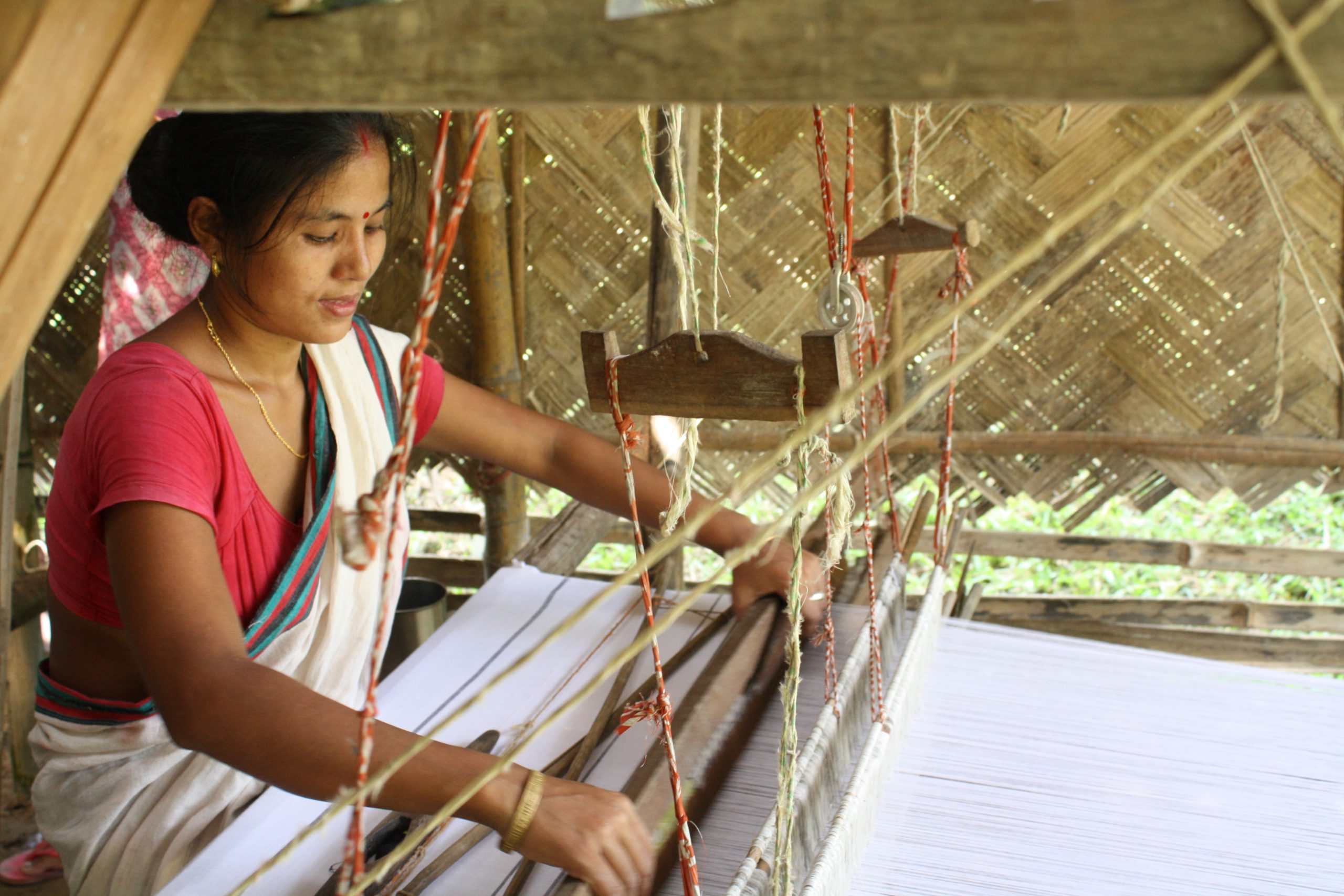 When Senai Mili invited Rekha Doley into her home in India’s northeastern Assam a few months back, the two women shared knowledge that has revolutionised their lives.

Doley, a 30-year-old master weaver, taught Mili, a 48-year-old grandmother, how to embroider new designs into the fabric she has woven to make clothes for her family for the past three decades – and also told her to sell it at the local market.

Doley, in turn, was introduced to the sought-after eri silk – a natural fibre made in Assam which fetches a good price and is popular around the world.

“Traditionally people didn’t see weaving as a way to earn money,” Doley said from her home in Panbari Mising village, which, like Mili’s village, sits in the flood plains of the mighty Brahmaputra River.

“The shawls made from eri silk are very expensive. I am excited about weaving with it,” she said, adding that a growing number of local families were now benefitting financially from selling their traditional textile products.

“We didn’t weave throughout the year and it depended on availability of yarn. These gaps would result in migration and trafficking,” she said.

The two families met as part of an initiative that has brought hundreds of families across the region together to fight both climate change and human trafficking, major problems in an area hit by frequent floods, poor farm yields and unemployment.

Assam has one of India’s highest rates of trafficking, with 201 cases in 2019, government data shows. Most victims are migrants looking for a better life, only to be exploited in poorly-paid jobs, with girls often trafficked to brothels.

Agroforestry is an important tool for combating climate change because the trees take planet-heating carbon dioxide out of the air while also making soils more fertile and reducing farmers’ vulnerability by not relying on just one type of crop.

“The idea that agroforesty can generate so much income is new to us,” said Doley. “It was good my husband and I made that four-hour bus journey to learn these new things … Now we do agroforestry in the months we are not weaving.”

India is the world’s third-biggest carbon emitter after China and the United States, and thus is vital in the fight to reduce carbon emissions which are fuelling climate change.

According to the government’s latest Climate Vulnerability Assessment, states in northeastern India, including Assam, are particularly vulnerable to climate change, with those who depend on natural resources, like small farmers, worst hit.

“The intensity of floods is increasing and people are getting impacted every year,” said Hasina Kharbhih, founder of anti-trafficking charity Impulse NGO Network, a partner in the initiative, which began in December.

“Response to human trafficking is not just about rescue but also about how the environment is protected and can provide income generating activities.”

The other partner in the project is the Rural Futures programme, run by non-profit Balipara Foundation that supports people across the Eastern Himalayas to make a living from their natural assets.

“The economy in these regions is intrinsically linked to the ecology and the income is being generated by nurturing the ecosystem,” said Saurav Malhotra, co-founder of Rural Futures.

Teenager Biman, who like many young people in Assam would have migrated, is now busy educating others in his village about the advantages of agroforestry.

“My family income has more than doubled since we met other weavers and started agroforestry,” said Biman, who switched from growing only rice to cultivating papaya and the famed bhut jolokia (ghost pepper) chilli.

“Most people my age have migrated to work as security guards or in hotels across India because there was no work here and farming was not profitable. But now there are options and income. So I stayed.”

Since the start of the project, his family’s income has grown five-fold to about 15,000 Indian rupees ($202) a month from selling their rice, vegetables and hand-woven cloth.

“Now we tell everyone to divide the land they have and ensure a portion is kept for agroforestry. Through the initiative, we also give saplings to families to plant on their land,” Biman said.

Sushanta Sarma, a professor at the Institute of Rural Management, which promotes sustainable development in rural areas, said creating local employment is probably the most practical solution to address migration and human trafficking.

“A co-creation model like this is ideal,” he said.

“This model worked wonderfully well during the COVID-19 lockdowns, which saw thousands of migrant workers returning home jobless and with no savings. It gave them a job in their homes.”

Anti-trafficking charities have asked the government to incorporate similar ideas into a draft bill which is likely to be introduced to parliament in the coming months.

The project’s founders believe it can address problems of rural unemployment, climate disasters, migration and trafficking faced by many developing countries.

“This model has immense potential in many other regions of the world drastically affected by climate change and lack of livelihood opportunities, including regions in central Africa and Latin America,” Malhotra of Rural Futures said.