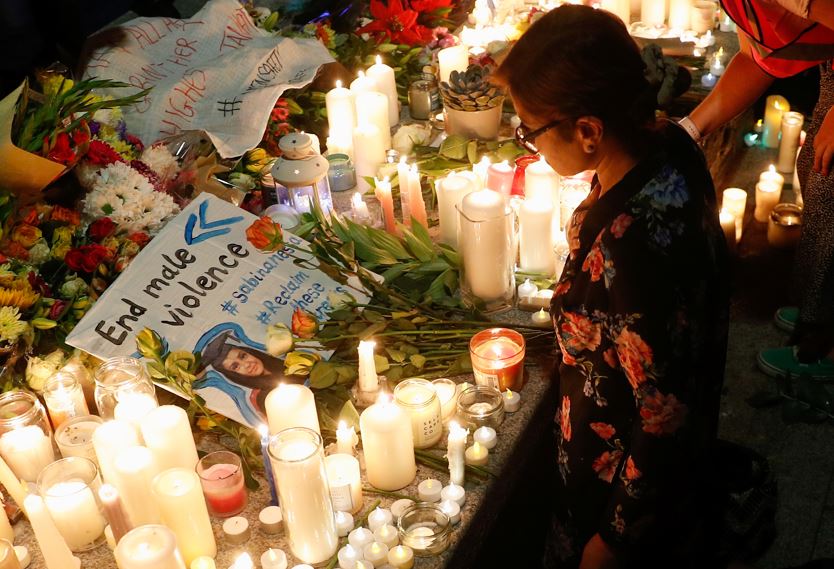 ON SEPTEMBER 17, Sabina Nessa was murdered as she walked across Cator Park in Kidbrooke, South East London: the 28-year-old’s remains were found there the next day.

Nessa’s murder is part of a familiar pattern: in the UK, a woman is killed by a man every three days.

While Nessa’s case bears striking similarities to the March 2021 murder of Sarah Everard, it has received nowhere near the same level of media attention.

This not only cements biased and disproportionate reporting on the lives of black and racially minoritised victims, but illustrates how little has changed since Everard’s murder at the hands of a London police officer.

Male violence against women and girls (VAWG) continues to be endemic. In 2020 alone, an estimated 1.6 million women in England and Wales were victims of domestic abuse, while approximately 620,000 women suffered a rape, sexual assault or attempted sex attack – yet only one in six reported the crime.

The current system is failing victims and allowing many, many perpetrators to go unpunished.

In the 22 years, I have been seeking justice for victims of VAWG, I have seen countless fatal and non-fatal cases dropped by the police or the Crown Prosecution Service.

In challenging these decisions, I have discovered that the prosecution’s case often falls apart because police officers misinterpret, destroy or inaccurately record evidence – they may even fail to gather key evidence in the first place because they deem the accused’s story more credible than the victim’s.

Too often the criminal justice system discredits victims who delay reporting, despite research clearly demonstrating that this is a common (and natural) reaction to trauma of this kind.

Police officers who ignore the testimony of female victims and witnesses are still rarely reprimanded, even when this testimony is later proven to be accurate.

In June 2020, sisters Nicole Smallman and Bibaa Henry were murdered in a London park. In September 2020, 21-year-old Blessing Olusegun was found dead on Bexhill seafront; while a post-mortem concluded that Olusegun had drowned, campaigners do not believe her death has been fully investigated.

In February 2021, 25-year-old Bennylynn Burke and her two-year-old daughter, Jellica, went missing from their home in South Gloucestershire. Their bodies were found in Dundee on 18 March.

Why do these women’s cases remain on the margins of public attention and outrage?

We must keep asking why women continue to die at the hands of men in such shockingly high numbers. The rights of all women continue to be undermined by the factors that underpin VAWG: discrimination, male entitlement, misogyny, racism and sexism all contribute to the problem, as does the lack of accountability at state, community and individual levels.

The media have a key role to play in opening each level up to scrutiny, and also in addressing their own ‘othering’ of VAWG against black and racially-minoritised victims through marginalizing these crimes in limited press coverage and attention.

Media representations of victims of VAWG tend to reflect dominant societal attitudes, but printed, visual and electronic news can be critical in raising awareness and increasing understanding of these and related social issues.

This has serious consequences; for those from black and racially minoritised communities, a perceived lack of interest in the violence they face may lead to underreporting. Conversely, it can also lead to sensationalised commentaries that increase fear and entrench culture, gender and racial stereotyping.

It is vital to improve understandings of VAWG, including femicide, across the media, and to facilitate access to reliable sources for all members of the press when reporting on such crimes. This is a vital aspect of, in turn, increasing the public’s knowledge and awareness of the risk factors for femicide and other forms of VAWG across all parts of our society.

Last Friday (24), I attended a vigil in Peglar Square to remember Sabina Nessa; I did so knowing that her name is yet another that will be added to this year’s Femicide Census. When it comes to women’s safety, there is a serious gap between rhetoric and reality.

We must turn our words into action. Part of bringing about the structural changes needed to tackle VAWG is to ensure that the public hears about all femicide cases on an equal basis.

Only then will everyone grasp the scale and true nature of the problem so that effective action can be taken to address the core issues that underpin violence against women and girls.

Professor Aisha K Gill, PhD, CBE, is professor of criminology at University of Roehampton, UK. Her areas of interest and research focus on health and criminal justice responses to violence against black and racially minoritised communities in UK, Afghanistan, Georgia, Iraqi Kurdistan, Libya, India, Pakistan and Yemen. She has been involved in addressing the problem of violence against women and girls/, ‘honour’ crimes and forced marriage at the grassroots/activist level for the past 22 years. In 2019, she was appointed co-chair of End Violence Against Women Coalition.