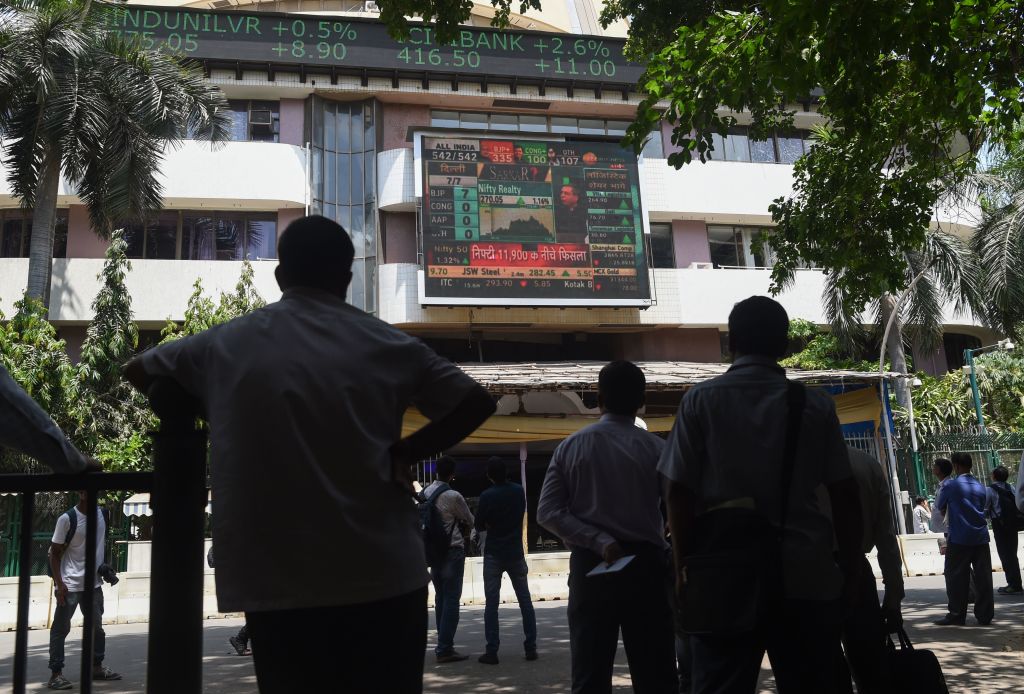 People watch share prices on a digital broadcast outside the Bombay Stock Exchange in Mumbai on May 23, 2019. (Photo by PUNIT PARANJPE/AFP via Getty Images)

AS Indian stock markets have hit record highs, there are mixed signals from analysts about the road ahead for equities in the short term.

With the BSE Sensex trending at dizzy levels of around 60,000, market participants raise a note of caution about the near future, while largely maintaining bullish views about long term outlooks.

Stock markets have rallied worldwide, but India outpaced its global peers, surging 25.77 per cent since January. While the Nasdaq went up 16.75 per cent during the same period, the UK’s FTSE 100 saw a modest uptick of 7.30 per cent.

Analysts feel that Indian equities, which are richly valued now, could become vulnerable to earnings disappointments and negative news flows, although there are views that a full recovery from the pandemic could improve the revenues of companies.

AK Prabhakar, head-research at IDBI Capital, expects the market to double from here to around 120,000 levels in five or six years, but the continuous rally so far without meaningful corrections since the 2008-2009 lows is a matter of concern.

“Post 2008-2009 we have never seen any major correction. A rally for almost 13 years without a correction is a concern in the short term. But in the long term, I am very bullish as I expect the market to double in the next five-six years, which is almost 15 per cent CAGR (compounded annual growth rate) returns,” he told Eastern Eye.

“I would be 80 per cent invested” at current levels, he said, adding that in case of a correction, he would fully invest his investible surplus.

According to Christopher Wood, global head of equity strategy at Jefferies, the Sensex is headed towards 100,000 levels in five years, although there is a risk of a correction in the short term.

As buying from domestic and foreign funds and retail investors meant the Sensex more than doubled from the March 2020 lows, India’s market capitalisation has soared to $3.44 trillion (£2.51trillion), surpassing France in the process to become the fifth biggest in the world.

At the current price-to-earnings (PE) ratio of 25.53, the bellwether index of the Bombay Stock Exchange is the second most expensive among large markets globally, behind the Nasdaq.

Prabhakar agreed that the rally has made the market expensive in select sectors.

“Now earnings growth or EPS expansion looks possible as multiple factors, notably Covid-19, have led to a major shift from unorganised to organised sectors. Most companies have learned to cut costs which has boosted margins.”

India, which is benefiting from the current trend of multinational companies geographically diversifying their manufacturing away from China, is the “best place for equities” with the caveat that investors are in the right sectors and stocks, he said.

The market analyst advised investors to be cautious about automobile companies, microfinance institutions and small banks.