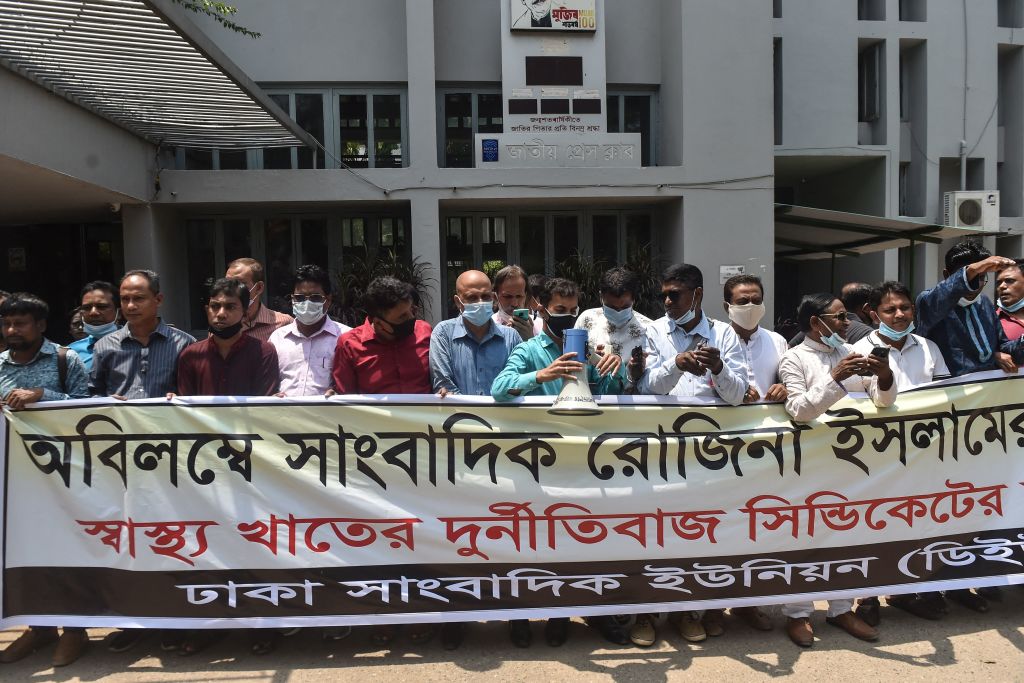 Colleagues of investigative journalist Rozina Islam (not pictured) protest in Dhaka on May 20, 2021, following her arrest on the accusation of stealing and taking images of the health ministry’s documents. (Photo by MUNIR UZ ZAMAN/AFP via Getty Images)

THE UNITED States on Tuesday (20) voiced concern over what it called a “deteriorating climate for press freedom” in Bangladesh.

Bangladeshi prime minister Sheikh Hasina has become a close partner of the United States, which has welcomed her support on climate change and her stand against Islamic extremism as well as her government’s welcome to hundreds of thousands of Rohingya refugees fleeing a brutal military campaign in neighbouring Myanmar.

“Bangladesh has shown improvements in protecting some human rights over the past year,” US state department spokesman Ned Price said, “but we do remain concerned about the infringement on media and press freedoms.”

“The government of Bangladesh has aggressively applied the Digital Security Act, leading to dozens of arrests for comments critical of the government’s handling of the pandemic, including using the act against academic professionals for the first time,” Price told reporters.

“We urge the government of Bangladesh to protect freedoms of expression and association, including members of the press, and to ensure fair trial guarantees for all of those who have been detained under the Digital Security Act,” he said.

President Joe Biden’s administration has promised to speak out on human rights including media freedom as part of an effort to halt what many fear is a decline of democracy worldwide.

In May, Bangladeshi police arrested a top reporter of the country, Rozina Islam, an investigative journalist of the Prothom Alo newspaper who has written scathing stories about the government response to Covid-19.

She was accused of stealing health ministry documents.

Hundreds have been detained since the government imposed the Digital Security Act in 2018.