The result will be announced on September 5, and Truss has built up a strong lead in surveys of Tory members 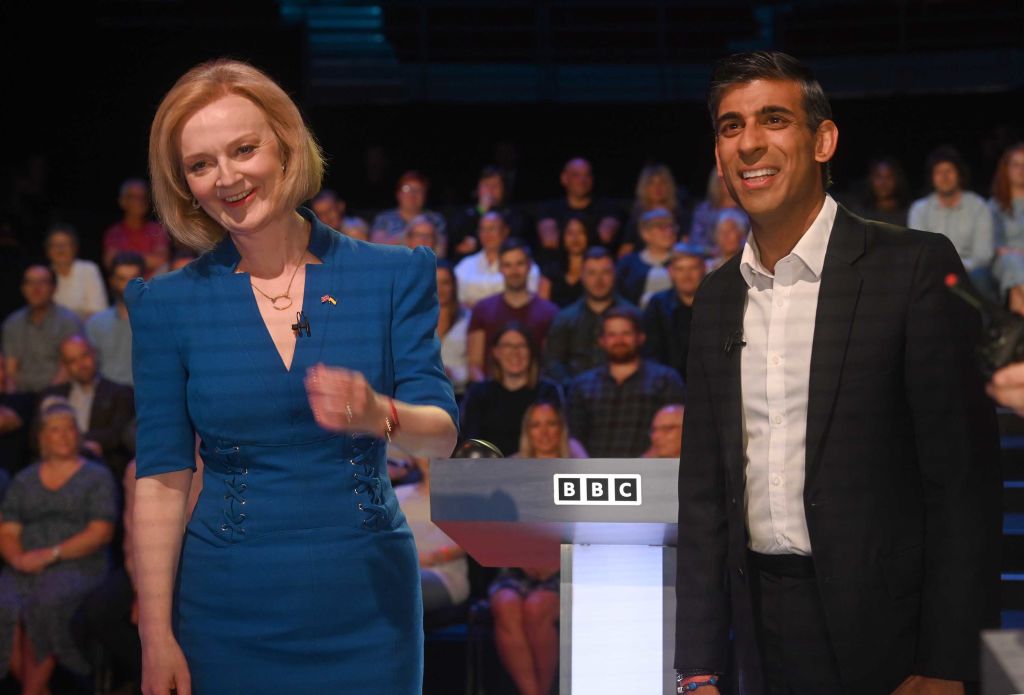 Rishi Sunak and Liz Truss take part in the BBC Leadership debate at Victoria Hall on July 25, 2022 in Hanley, England. Former Chancellor Rishi Sunak and Current Foreign Secretary Liz Truss go head-to-head in the BBC Conservative Leadership debate in their bid to win the contest and become the UK’s next Prime Minister. (Photo by Jeff Overs/BBC via Getty Images)
Follow Us

The hustings in Leeds, northern England, were the opening bout of 12 nationwide events as the grassroots members elect a new leader after a cabinet revolt forced scandal-hit Johnson to quit.

The result will be announced on September 5, and Truss has built up a strong lead in surveys of Tory members after vowing immediate tax cuts as Britain confronts a slump in living standards.

Defence Secretary Ben Wallace used an editorial published in The Times daily after the hustings to throw his support behind Truss, saying she was the “only candidate who has both the breadth and depth of experience needed”.

“From day one the new prime minister needs to know their way around the international community as well as the Treasury. Only Liz can do that,” wrote Wallace, a popular figure in the ruling Conservatives.

On foreign policy, both rivals used the debate to extend Johnson’s staunch support for Ukraine, and to resist China’s increasingly authoritarian rise, while profiting from vaguely defined “Brexit opportunities”.

The foreign secretary went to high school in an affluent suburb of Leeds, while Sunak’s Westminster seat lies about an hour’s drive north in the same county of Yorkshire.

Truss said her Yorkshire upbringing had given her “grit, determination and straight-talking”.

“And that, my friends, is what I think we need now in Downing Street,” she told the hustings audience.

She vowed to “channel the spirit of Don Revie” — referring to a manager of the Leeds football club in the 1960s and ’70s whose players were notoriously combative. Revie was also accused of bribery.

Former finance minister Sunak has denounced Truss’s “fairy tale economics”, vowing to tame surging inflation first, but has admitted that he is the “underdog” in the contest.

Their two televised head-to-head debates so far were fractious — although the second on Tuesday was abruptly halted when the TalkTV moderator fainted live on air.

In Leeds, there was no such drama, but plenty of hard-nosed questioning from Tory members. The candidates went on stage one after the other, rather than squaring off at lecterns from opposite ends of a TV studio.

The members applauded co-chairman Andrew Stephenson when he observed that their party was poised to appoint Britain’s third woman prime minister or its first one of colour.

Sunak joked that he had got a “great tan” after crisscrossing the Leeds region in rare sunny weather this week, and hailed his ethnic-Indian family’s immigrant success story.

‘Groupthink’
The wealthy former financier also hit back at caustic attacks from the Truss camp about his expensive tastes in fashion, which purport to show that he is out of touch with the ordinary public in hard times.

“This is not about what shoes I wear or what suit I’m wearing.

“This is about what I’m going to do for the country,” Sunak said, earning applause, although he was also accused by one questioner of “stabbing Boris Johnson in the back”.

Truss meanwhile was reminded at the hustings of her opposition to Brexit in 2016, and her student leadership of the Liberal Democrats at the University of Oxford when she called for the abolition of the monarchy.

“Almost as soon as I made the (monarchy) speech, I regretted it,” she said. “I was a bit of a teenage controversialist.”

Both the candidates vowed support for Johnson’s “levelling up” agenda of revitalising growth in neglected regions of the UK including around Leeds.

Ahead of the hustings, Truss backed a railways investment project to help “turbocharge investment” in northern England, after Johnson and Sunak’s Treasury scaled it back on the grounds of cost.

“The thing about me is I’m prepared to take on the Whitehall orthodoxy, I’m prepared to challenge the groupthink that has, over decades, not put enough investment into this part of the country,” she said.

Addressing Britain’s cost-of-living crisis, Sunak this week staged a U-turn to back more tax relief on household energy bills, which are set to rocket anew in October.

“I will grip inflation and get it back down,” he said at the hustings, vowing tax cuts in the future.