INDIAN origin chief executive officer (CEO) of Reckitt Benckiser (RB) was among those invited to a breakfast meeting between the US president Donald Trump and senior business leaders from Britain and the US.

Another Indian origin Vis Raghavan, the CEO for JP Morgan in Europe, the Middle East, and Africa also participated in the meeting as a US business head on Tuesday (4).

Rakesh Kapoor, the outgoing CEO of the consumer goods company RB and Raghavan were on the list of 10 business heads who attended the meeting at St James’s Palace in London.

Kapoor told Trump, RB planned to invest an additional $200 million between its British and US businesses his year, including a $70m investment in a Michigan production site.

The meeting of five British and five American firms, senior ministers, and officials was held with a focus to boost trade links.

The US president is in Britain for a three-day state visit starting from Monday (3).

The meeting was hosted by Trump and the UK prime minister Theresa May.

The leaders’ top priority was a possible bilateral trade agreement to take effect once the UK moves out of the European Union. 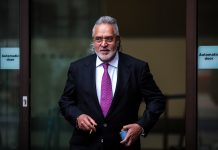