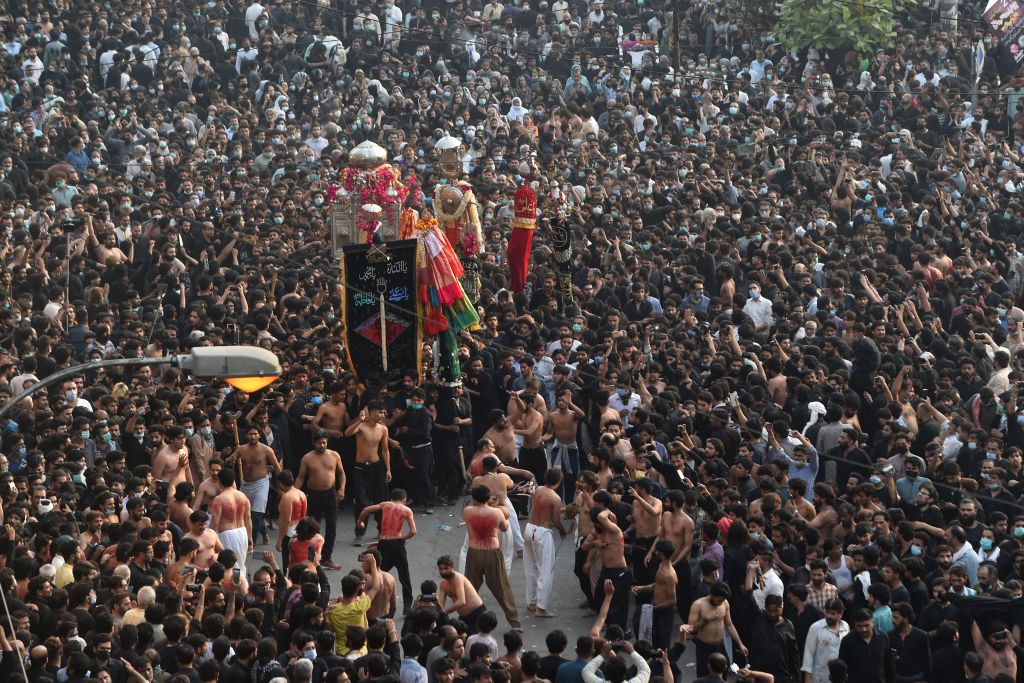 Shiite Muslim devotees take part in a procession to commemorate the death anniversary of Prophet Mohammad’s companion and son-in-law Imam Ali in Lahore on May 4, 2021. (Photo by ARIF ALI/AFP via Getty Images)
Follow Us

THOUSANDS of Shiite Muslim devotees –- many not wearing masks — gathered in Pakistan’s eastern city of Lahore for a religious procession on Tuesday (4), fanning fears about the spread of the coronavirus after similar crowds were blamed in neighbouring India for its own surge.

Religious events staged in India in recent weeks, including the Kumbh Mela attended by millions of pilgrims, have been held responsible for spurring one of the worst crises of the pandemic to date, closely watched by Pakistan with growing anxiety.

“I have attended this procession every year for as long as I can remember,” said Ali Kazmi, 28, who took part in Lahore, where officials estimated between eight and ten thousand worshippers participated.

“They try to stop Shiite mourning ceremonies and processions using different excuses. It is (coronavirus) today, before that it was the issue of security. It’s all excuses.”

Members of Pakistan’s Shiite sect make up around 20 percent of the Islamic republic’s 220 million population. Smaller processions were also held in major cities across the country.

Dressed in black, devotees chanted slogans and slapped their chests in unison while others whipped themselves with blades.

“We reject any restriction imposed on mourning ceremonies. Your local elections can take place, your markets are open, your government meetings are happening,” said Pakistan’s Shiite Ulema Council in a statement ahead of the rally.

An official from Lahore’s police department said they attempted to negotiate with clerics and religious leaders over the procession, who refused to back down.

Security however was still provided.

Pakistan is struggling to contain a third wave of infections, with more than 800,000 cases and 18,000 deaths declared.

Only a small fraction of its population has been vaccinated.

Pakistani authorities have largely avoided clamping down on religious activities in recent months.

Mosques have remained open throughout the month of Ramadan, with few adhering to social distancing guidelines during huge nightly gatherings of worshippers.

However, private gatherings, shops and restaurants have faced tight restrictions, with the army mobilised to help enforce rules.

The government has also announced a ban on travel between provinces and imposed closures on hotels and tourist spots for more than a week over Eid celebrations, which usually spur the mass movement of people around the country.