“The security of the United Kingdom, both today and for future generations, will always be of paramount importance to this government,” said Sunak. 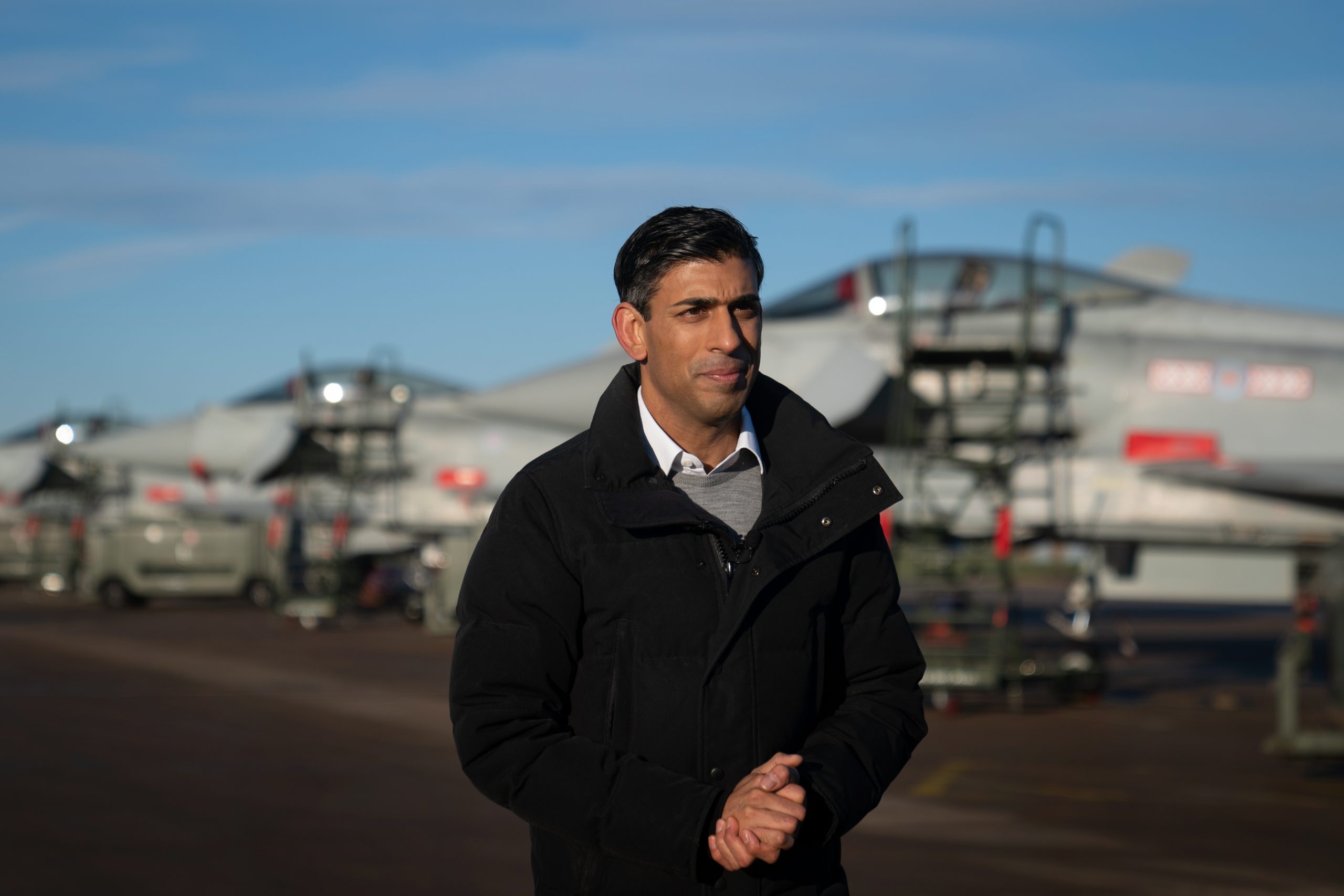 LINCOLN, ENGLAND – DECEMBER 09: Prime Minister Rishi Sunak during his visit to RAF Coningsby in Linconshire following the announcement that Britain will work to develop next-generation fighter jets with Italy and Japan, on December 9, 2022 in Lincoln, United Kingdom. Sunak is working on “new tough laws” to limit the impact of strikes, as Border Force staff prepared to join a wave of industrial action set to cause major travel disruption across the UK over Christmas. (Photo by Joe Giddens – WPA Pool/Getty Images)
Follow Us

The UK will work with Italy and Japan on the next generation of combat air fighter jets through an “unprecedented” international aerospace coalition, British Prime Minister Rishi Sunak announced on Friday.

The Global Combat Air Programme (GCAP) is a new partnership dubbed as an ambitious endeavour to adapt and respond to the security threats of the future.

Due to take to the skies by 2035, the new fighter jets are expected to be enhanced by a network of capabilities such as uncrewed aircraft, advanced sensors, cutting-edge weapons and innovative data systems.

“The security of the United Kingdom, both today and for future generations, will always be of paramount importance to this government,” said Sunak.

“That’s why we need to stay at the cutting edge of advancements in defence technology – outpacing and out-manoeuvring those who seek to do us harm. The international partnership we have announced today with Italy and Japan aims to do just that, underlining that the security of the Euro-Atlantic and Indo-Pacific regions are indivisible,” he said.

“The next generation of combat aircraft we design will protect us and our allies around the world by harnessing the strength of our world-beating defence industry – creating jobs while saving lives,” the British Indian leader added, ahead of a visit to a Royal Air Force base – RAF Coningsby in eastern England – to launch the first major phase of the programme.

According to Downing Street, by combining forces with Italy and Japan on the next phase of the programme, the UK will utilise its expertise, share costs and ensure the UK’s RAF remains interoperable with its closest partners. The project is also expected to create high-skilled jobs in all three countries, strengthening the industrial base and driving innovation with benefits beyond pure military use.

Officials said that it is anticipated that more like-minded countries may buy into GCAP in due course or collaborate on wider capabilities – boosting UK exports. The combat aircraft developed through GCAP is also expected to be compatible with other North Atlantic Treaty Organisation (NATO) partners’ fighter jets.

“This international partnership with Italy and Japan to create and design the next generation of combat aircraft, represents the best collaboration of cutting edge defence technology and expertise shared across our nations, providing highly skilled jobs across the sector and long-term security for Britain and our allies,” said UK Defence Secretary Ben Wallace.

The UK, Italy and Japan will now work “intensively” to establish the core platform concept and set up the structures needed to deliver this massive defence project, ready to launch the development phase in 2025. Ahead of the development phase, partners will also agree to the cost-sharing arrangements based on a joint assessment of costs and national budgets, Downing Street said.

Alongside the development of the core future combat aircraft with Italy and Japan, the UK has said it will also assess its needs on any additional capabilities, for example weapons and Uncrewed Air Vehicles.