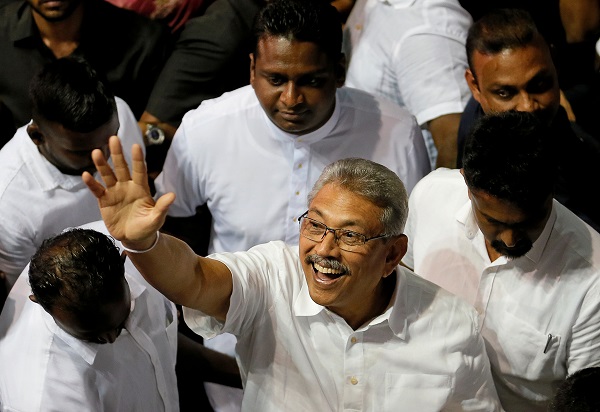 Rajapaksa is widely seen as the election frontrunner because of his popularity among majority Sinhala Buddhists over his role in ending a 26-year civil war in 2009, ushering in a decade of relative peace until Easter Day bombings that killed 250 people (REUTERS/Dinuka Liyanawatte/File Photo).

A COURT in Sri Lanka set up a three-judge panel on Monday (30) to hear a petition challenging the citizenship of presidential nominee Gotabaya Rajapaksa, which could disqualify the hardline former defence chief from the November 16 vote if it succeeds.

Rajapaksa is widely seen as the election frontrunner because of his popularity among majority Sinhala Buddhists over his role in ending a 26-year civil war in 2009, ushering in a decade of relative peace until Easter Day bombings that killed 250 people.

“A person who is not a citizen of Sri Lanka is not qualified to be elected to the office of the president,” two rights activists said in the petition filed last week.

They argue that Rajapaksa did not properly obtain dual Sri Lankan citizenship in 2005, when he was a US citizen.

“The purported dual citizenship certificate is null and void,” they added.

Rajapaksa, 70, renounced Sri Lankan citizenship in 2003 to obtain US nationality, but returned to Sri Lanka two years later, applying for dual citizenship after his brother Mahinda Rajapaksa won the presidency.

Sri Lanka does not allow dual citizens or non-citizens to contest national elections.

A spokesman for Rajapaksa, Keheliya Rambukwella, denied the contention.

“Not only are the allegations completely false, this is to create uncertainty and create panic among the general public about Gotabaya Rajapaksa’s candidature,” he told Reuters.

Still, Rajapaksa’s popularity has grown in recent months, especially after it emerged that the government had failed to act on repeated intelligence warnings from India ahead of the blasts, which were claimed by militant group Islamic State.

Most Buddhist leaders, and some victims of the terror attacks, have since expressed their desire for the Rajapaksa family to return to power.

The activists who filed the petition, Gamini Viyangoda, an official of a citizens’ group and Chandraguptha Thenuwara, an artist and lecturer, have campaigned for democracy, good governance and rule of law.

In the 2015 presidential election, they backed the winner, Maithripala Sirisena, against Mahinda Rajapaksa.