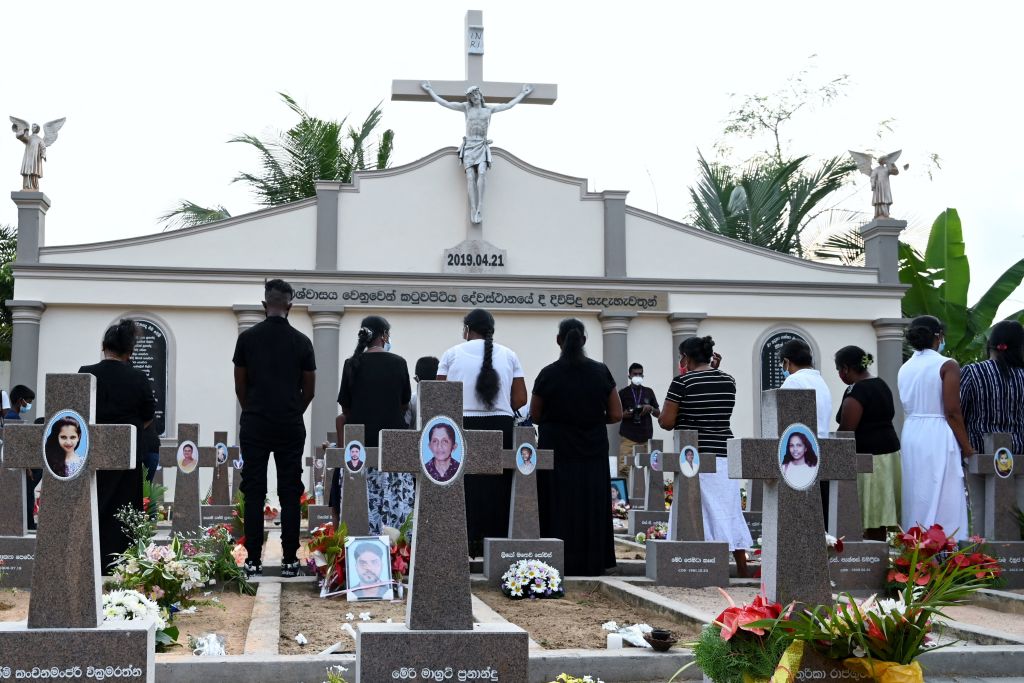 Relatives pay their respect at a graveyard for St. Sebastian’s Church bomb blasts victims in Negombo, Sri Lanka, on April 21, 2021, marking the second anniversary of the 2019 Easter Sunday attacks at three churches and hotels. (Photo by LAKRUWAN WANNIARACHCHI/AFP via Getty Images)

SRI LANKA’S former police chief Pujith Jayasundera was on Monday (22) indicted for failing to act despite receiving intelligence warnings ahead of the 2019 Easter Sunday terror attacks.

Nearly 270 people, including 11 Indians, were killed in a series of devastating blasts that tore through three churches and as many luxury hotels on April 21, 2019.

The attorney general read out the charges when the case was taken up before a three-judge High Court bench comprising Justices Namal Balalle, Aditya Patabendige and Mohamed Irshadeen.

A total of 855 charges of criminal negligence were levelled against Jayasundera, who pleaded not guilty.

Jayasundera was present in the courtroom when the charges were read out against him in the case, which has over 1,200 witnesses, his lawyers said, insisting that the former inspector general was not guilty of ignoring prior intelligence.

Former defence secretary Hemasiri Fernando, who was a key member in the defence ministry when the attacks took place in April 2019, also faces similar charges.

Jayasundera and Fernando were suspended from service and arrested in connection with the case. However, they were later released on bail.

Both were accused by the then president Maithripala Sirisena of inaction to prevent attacks despite the availability of intelligence on the attacks.

Police have filed over 23,000 charges against suspects for conspiring, aiding and abetting the attacks.

The attacks stirred a political storm as the then government headed by Sirisena and prime minister Ranil Wickremesinghe was blamed for its “inability” to prevent the attacks despite intelligence being made available.

During his tenure, Sirisena formed a presidential panel to probe the attacks. But it found Sirisena himself along with a host of other top defence officials, including Fernando and Jayasundera, guilty of ignoring intelligence. The panel report had recommended criminal action against them.