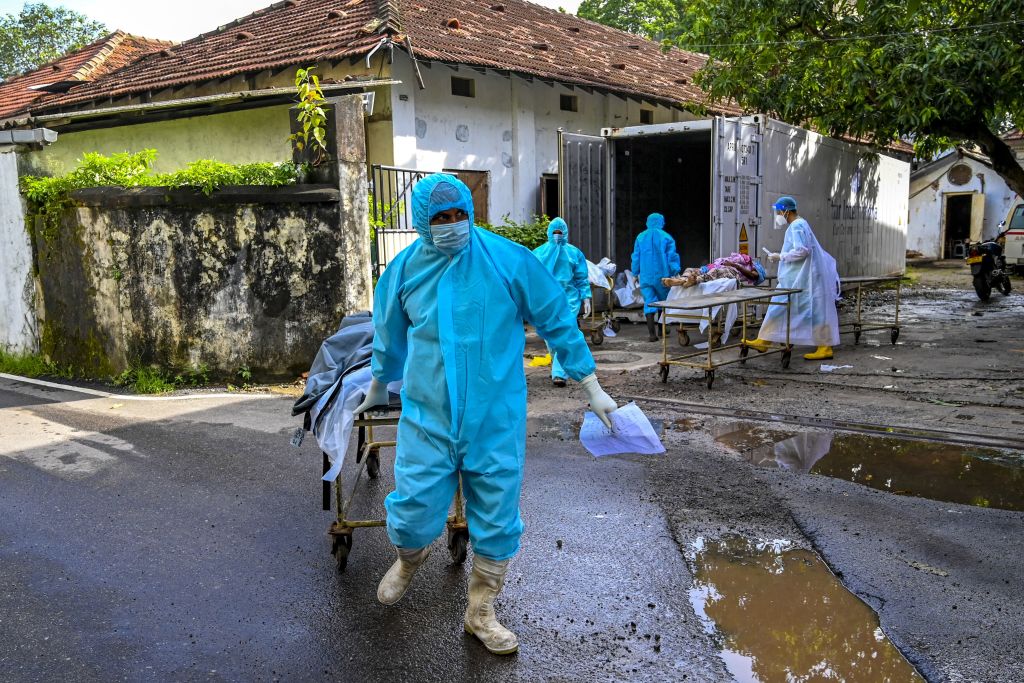 Mortuary workers remove unidentified bodies from a freezer container to be taken for a Covid-19 test in Colombo on August 10, 2021. (Photo by ISHARA S. KODIKARA/AFP via Getty Images)

SRI Lanka’s government rejected on Tuesday (10) mounting calls for an immediate lockdown to contain a surge in Covid-19 cases and deaths that are severely stretching hospitals and crematoriums.

Government spokesman and media minister Keheliya Rambukwella said the country had not reached a critical stage even as the island nation suffers more than 100 deaths per day on average.

“Curfews or a lockdown is the last resort, but we are not there yet,” Rambukwella told reporters. “Our target is to get everyone over the age of 18 vaccinated by September and thereafter it is in the hands of the gods.”

His comments came despite the Sri Lanka Medical Association (SLMA) issuing what it called a “final warning” to the government to restrict the movement of people immediately or risk a bigger catastrophe.

“We have given the final warning to the government to take urgent steps to lock down at least for two weeks,” said a spokesman for the SLMA, a professional body of medical experts.

A junior minister for health, Channa Jayasumana, called the Delta variant of the virus “a powerful bomb which has exploded in Colombo and is spreading elsewhere”.

On Friday (6), the government tightened some restrictions, banning state ceremonies and public gatherings until September 1.

But most activity is allowed, with shops, restaurants and offices open and public transport still operating.

The number of deaths hit a record 111 on Monday (9) with the daily average in the past week crossing 100 – more than double the average of 40 in the previous week.

The number of infections also more than doubled to nearly 3,000 this week.

At one morgue in Colombo on Tuesday (10) morning, workers tested 15 corpses for Covid-19 and then cremated them to clear the way for more bodies.

A Colombo magistrate ordered the immediate disposal of 40 corpses that remained unclaimed by the next of kin.

The Colombo Municipal Council began mass cremations on Sunday (8) to clear a backlog after hospital mortuaries ran out of refrigeration space for bodies.

Just over 11.2 million people out of the population of 21 million have been given at least one vaccine jab, while 3.2 million had received both as of Monday (9).

Sri Lanka has recorded 5,222 deaths to date and almost 333,000 infections, according to official data.