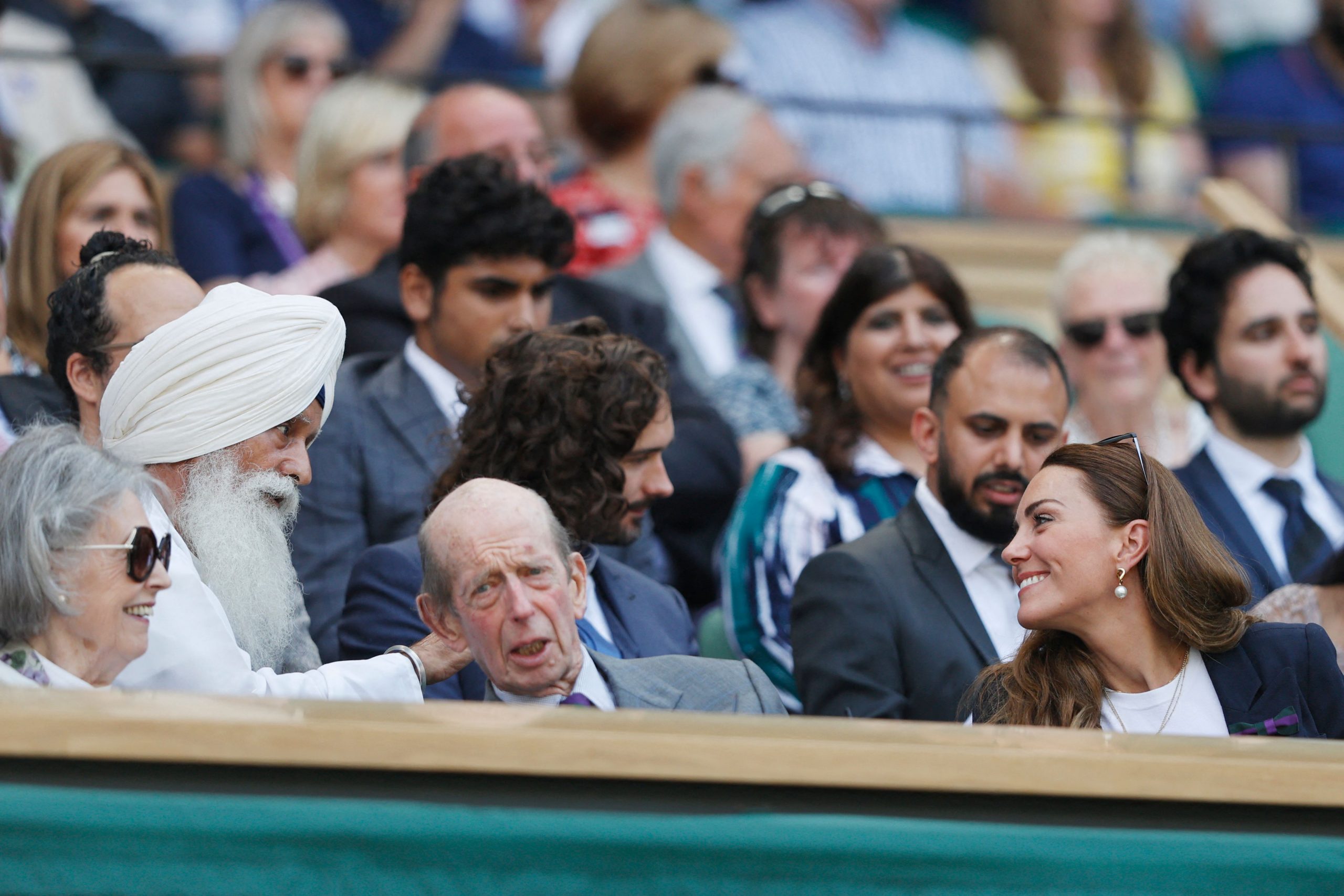 A SIKH pensioner who was honoured by the Queen for motivating people to stay fit during the pandemic lockdown is seen chatting to the Duchess of Cambridge in the royal box at centre court in Wimbledon on Friday (2).

Rajinder Singh or the ‘Skipping Sikh’, as he is popularly known, was recognised with an MBE for services to health and fitness in the Queen’s birthday honours list in June.

Invited to the prestigious royal box on day five of Wimbledon, the Skipping Sikh told Eastern Eye, “I’m truly honoured and very humbled to have met the Duke of Kent and the HRH Kate Middleton (sic) who was sat in the row in front of me in the Royal Box at Wimbledon today.

“She looked back and smiled and congratulated me on my efforts this last year in helping people to stay active in the lockdown. I said, ‘Thank you and it’s all your blessings, God bless you and your family, you’re like a daughter to me and I’m proud of your work.’”

Singh said he was a big fan of Andy Murray, who lost to Canada’s Denis Shapovalov in the third round on Friday evening.

Singh added: “It has been a very special day and I’ve felt so welcome along with meeting other inspiring people like Mr Motivator and (fitness coach) Joe Wicks who was sat near me.

“I love tennis and [I am] a big fan of Andy Murray. I am grateful to God that I could do something for the country.

“I thoroughly enjoyed myself and my daughter Minreet Kaur and I will never forget this amazing experience.”

Singh, 74, starred in exercise videos that went viral during lockdown, after he became concerned that some members of the Sikh community were feeling isolated as gurdwaras were closed in the initial lockdown.

His exercise videos proved a hit on social media and helped raise more than £14,000 for NHS charities. Singh said exercise could have a positive impact on those who might be struggling throughout lockdown.

“I hope that I can help people, give them good health and give them knowledge to keep fit and strong,” he told Eastern Eye previously. He also hoped he could motivate other elderly people to get fit, practise skipping or any other workouts.

“(Besides Sikhs), I understand it’s difficult for all of us – people from all faiths and from all parts of the country,” he said. “I hope I can do something for them”.

Singh, from Hillingdon, west London, who has taken part in approximately 25 marathons, has always been active and interested in fitness. He learned from his father, a soldier, and was taught how to skip from an early age. Now, he tries to exercise four or five times a day. In light of the lockdown measures, he works out in his allotment, garden or home.

Wimbledon this year has invited individuals who have played a big part in combating the coronavirus to watch the action at this year’s championships seated in the royal box.

Spectators on Monday (28) paid tribute to Sarah Gilbert, the Oxford University professor who co-designed the Oxford/AstraZeneca vaccine, with a standing ovation on Centre Court before play began in the annual grand slam.

Also in the royal box on Monday was Hannah Ingram-Moore, the daughter of late Captain Tom Moore, who struck a chord with locked-down Britain by walking around his garden with the help of a frame to raise millions of pounds for NHS workers.