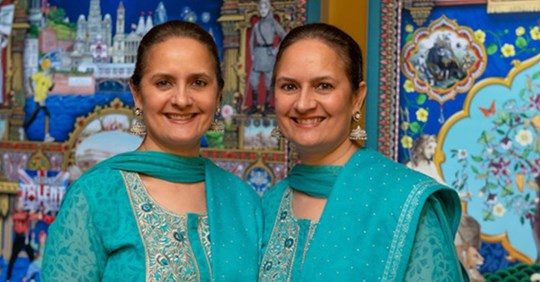 The mixed media artwork, in the Twins’ charac­teristic Mughal miniature style, “pays tribute to NHS and other frontline health care workers while pre­senting a satirical look at the government’s handling of the crisis and challenging notions of Britishness”.

The newspaper’s report from May 8, by executive editor Shailesh Solanki, based on an interview with health secretary Matt Hancock, was headlined, “We owe the inquiry to BAME victims”, on the front page, and “NHS ‘needs BAME staff to run’ ” inside.

The mixed media artwork, in the Twins’ charac­teristic Mughal miniature style, “pays tribute to NHS and other frontline health care workers while pre­senting a satirical look at the government’s handling of the crisis and challenging notions of Britishness”.

“Special emphasis is given to the contribution of and additional risk to BAME carers working within the health sector,” the Twins emphasised.

They added: “The main focus of the composition is an Asian nurse depicted as a modern day St George, riding a horse, with lance in hand and bat­tling with a Covid-19 virus dragon on the edge of the White cliffs of Dover.

“Her recycled bin bag apron, visibly cracked visor, tiny shield – inscribed with the Celtic knot of protec­tion and the words ‘too little too late’ – and single glove, symbolise the plight of frontline healthcare workers whose lives and those of their patients have been put at risk due to an inadequate supply of PPE (personal protection equipment).

“An aeroplane bearing the name Pandemic Air­ways flies head on into the central composition. This, together with a banner promoting a public outdoor international sporting event, represent what many regard as the reckless incompetence of a government which failed to heed scientific opinion and act swiftly enough in the early weeks of the out­break – missing a key window of opportunity to control the onslaught of the virus in UK through quarantine, testing and social isolation measures.”

Talking about their artwork, the Twins said: “Is­sues around politics, culture and identity have al­ways been central to our work as artists. So, in ad­dition to creating a tribute to the NHS and wider health care sector, we wanted this artwork to reflect what the Covid-19 crisis has revealed about our society. Something reinforced, in particular, is the invaluable contribution of BAME and immigrant communities to Brit­ain. And, in fact, as our Covid-19 artwork shows, that has always been the case.”

As is invariably the case with the Twins, the devil, as far as the authorities are concerned, lies in the detail. Prime minister Boris Johnson is shown straddling the horse just be­hind the nurse, thrusting a knife into her back, while pulling on the horse’s reins. His prede­cessor, Theresa May, is shown in front of Big Ben, brandish­ing a “Brexit Sale” sign, while a pay rise for nurses is voted down in Parliament.

According to the Twins, such symbolism “point to the hypocrisy of a government which claps for the NHS in public, but whose policy and attitude towards public sector emergency services over the years has hindered and caused injury to the NHS.

“Elsewhere, the depiction of a lamb impaled by the portcullis – symbol of Parliament – rep­resents the similar predica­ment of care home work­ers, one of whom told the press they felt like ‘lambs to the slaughter’ without proper access to PPE.”

“Given their resolve to care for and protect the people of Britain from the virus pan­demic despite the personal danger and lack of government support”, the artists “present our healthcare workers in the same way the Saints of old were regarded – namely, as ordinary people who achieved extraordinary things.

“The hand used by the nurse to strike the Covid-19 dragon, is decorated with henna pat­terns traditionally associated with married life in India.”

The Twins explain they see their role as social, political commentators. Their first re­sponse to the Covid-19 crisis was a personal portrait cre­ated as a tribute to a friend, a frontline healthcare worker, who died from the virus.

Their anger over what they describe as unneces­sary loss motivated them to create this second work, NHS V Covid-19-19: Fighting on Two Fronts. The artwork which combines hand-painted and digital im­agery using creative software tools, took weeks to create and then film for their ap­pearance as guest artists in the last episode of Channel 4’s Grayson’s Art Club on June 1. The Twins summed up: “Depicting St George as an Asian fig­ure challenges narrow perceptions of British and Englishness.”