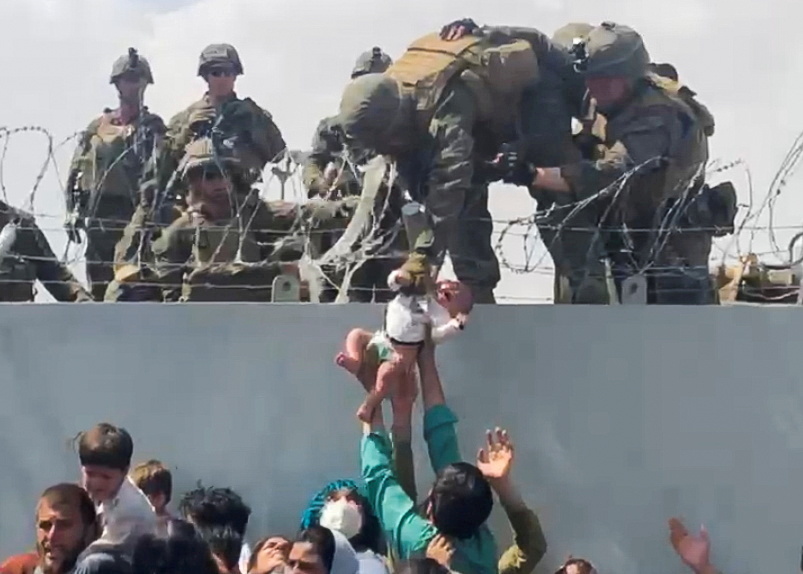 FILE PHOTO: A baby is handed over to the American army over the perimeter wall of the airport for it to be evacuated, in Kabul, Afghanistan, August 19, 2021. OMAR HAIDARI/via REUTERS/File Photo

ON A fine spring day in 2014, Flight Lieutenant Rakesh Chauhan returned home to Britain from Afghanistan – in a coffin draped in the Union flag.

A Royal Air Force (RAF) transport plane landed at RAF Brize Norton in Oxfordshire, bringing back the bodies of 29-year-old Rakesh and four other British servicemen who were killed just before midnight on April 26, 2014. They died when their Lynx helicopter crashed in Kandahar province, 48km from the Pakistan border.

Rakesh (“Rak” to his compatriots), who was on his third tour of duty in Afghanistan, was an intelligence officer regarded by his superiors as a rising star in the RAF.

In 20 years of deployment in Afghanistan, there have been 457 deaths of UK armed forces personnel. Were the lives of Rakesh and all the others lost in vain, the country is now asking.

Tom Tugendhat, a Tory MP and chairman of the Foreign Affairs Select  Committee who had himself served as a soldier in Afghanistan, spoke for many when he told the Commons last week: “Like many veterans, this last week has seen me struggle through anger, grief and rage – through the
feeling of abandonment of not just a country, but the sacrifice that my friends made. I have been to funerals from Poole to Dunblane. I have watched good men go into the earth, taking with them a part of me and a part of all of us.”

In the past few days, listening to countless young Afghans, especially educated young women, express their determination not to go back to the past, it is clear something has changed in Afghanistan.

In a country of 40 million people, nearly two-thirds are under 25. And those under the age of 15 make up almost half the population. They have no personal experience of life under the Taliban from 20 years ago.

The chief of the defence staff, General Sir Nick Carter, said the world needs to “hold its nerve” to see what the future will look like in Afghanistan under a Taliban-led government.

He told BBC Radio 4’s Today programme: “I think we also have to be patient. We have heard a lot from the Taliban over the last 24 hours, and it may be that this Taliban is a different Taliban to the one that people remember from the 1990s. It may well be a Taliban that is more reasonable, less repressive and if you look at the way it is governing Kabul at the moment, there are some indications that it is more reasonable.”

He found what had happened in Afghanistan “personally distressing”, but suggested the Taliban be given “a chance” to govern.

“It is entirely right for us to be extremely suspicious (of the Taliban) and go on what evidence we’ve got,” Carter said.

“But we would be silly, I think, if we didn’t give them a chance”.

It might be equally “silly” to think that the Taliban will not wish to reassert its authority once American and British troops have left Kabul airport.

For the time being, some Taliban leaders might want to come across as reasonable folk who seek to have an inclusive government. But the Taliban will be ruthless in consolidating its hold on Afghanistan – and do what Ayatollah Khomeini did after the fall of the Shah in Iran in 1979.

A part of the country’s population, who feared for their safety, fled Iran and went into exile. They have never been able to return.

Inside Iran, Khomeini ordered sweeping executions to eliminate anyone who might challenge the new order. More than four decades on, the ayatollahs are firmly in power.

Those fleeing Afghanistan today will build new lives elsewhere. As the years pass, they will put down roots and choose never to return to Afghanistan. And if the Iranian model is followed, the Taliban can expect to remain in power in the country for the foreseeable future.

India got seven mentions in the Commons debate on Pakistan, which was closed by the foreign secretary Dominic Raab: “We must work to safeguard regional stability. That will require us to work with different partners, and it will require engagement with key regional players, including India, China, Russia, Pakistan and central Asian states, however difficult, complex or outside of our comfort zone that may prove.”

On “human rights and accountability”, Raab said: “Through our domestic sanctions regime and by working with the Indians, who chair the UN sanctions regime for Afghanistan, we will make sure that we can exercise a moderating  influence on the Taliban regime.”

The Taliban’s victory has been described as a setback for India and a happy outcome for Pakistan.

Several politicians and commentators have said the Taliban’s take-over could not have been achieved without help from Pakistan’s ISI (InterServices  Intelligence). But others have recognised that the Taliban coming out on top may not be an unmixed blessing for Pakistan. After all, the presence of the “Pakistani Taliban”, an offshoot of the parent organisation in Afghanistan, destabilises Pakistan.

The ramifications for Pakistan are quite complex. To return to the tragedy of Rakesh Chauhan, his family can take comfort from the knowledge that he and the others who made the ultimate sacrifice helped to create a better Afghanistan – however bleak its prospects might appear to be at the moment.

THE story will be told later of journalists who remained behind in Kabul to report on the fall of the city to the Taliban.

Here I must commend my old friend Kim Sengupta – we used to sit opposite each other at the Daily Mail. He is now security and defence editor of the Independent and, although this is a hazardous assignment, he has been in Kabul for several weeks.

I heard him on LBC last week, giving a harrowing account of women crushed to death at Kabul airport. The Independent is now online only, but Kim’s tweets have kept us informed about the unfolding tragedy.

“A grim and very sad morning of death and loss outside the airport: Children orphaned as parents crushed to death in Kabul airport chaos,” he said in one tweet.

“Full of admiration for fellow journalists who are doing so much to help those under threat from the Taliban to get out of Afghanistan,” he said in another.

He added: “The four deaths at Kabul airport were outside the British camp, soldiers tried all they could to save the victims. Bodies were later collected by relations.”

And: “Still difficult to believe a German A-400M transporter left with just 7 people on board.

“The honeymoon period, what was there of it, seems to be ending past with the Taliban beginning to search homes and, reportedly, arresting people.”

Kim quoted Afshaneh Ansari, a female student and activist: “I was thinking this morning, I was born in the year the Taliban lost power 20 years ago, the life I wanted so much and tried so hard to achieve ends 20 years later, today.”

When Kim finally gets out of Kabul, his story behind the story will be fascinating.

THE Everly Brothers are gone. Phil Everly died, aged 74, of pulmonary disease in 2014. And Don Everly died last week, aged 84, at his home in  Nashville, Tennessee. The duo were famous for such songs as Bye Bye Love and Cathy’s Clown but I listened once more to my favourite, All I Have To Do Is Dream.

THE Afghanistan crisis has pushed the pandemic into the background, but it’s still here. Lest we
forget, about 30,000 people a day are getting infected with Covid-19, with a daily death toll of around 100. Some who refused to take the vaccine have paid the ultimate price.