Rishi Sunak pledges major crackdown on sex offenders: I will ban down-blousing, make it a criminal offence if you harass women

Sexual violence against women and girls should be treated as a national emergency until it has been defeated. 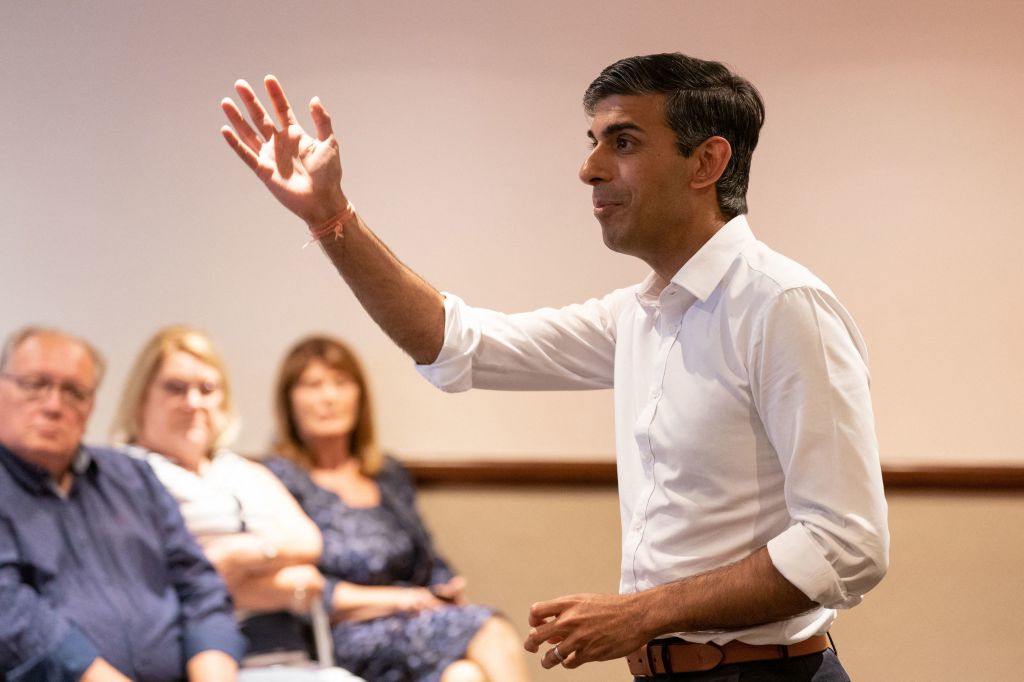 Britain’s former chancellor to the exchequer and candidate to be the Leader of the Conservative Party, and Britain’s next Prime Minister Rishi Sunak, gestures as he delivers a speech during a campaign event in Newmarket, on July 27, 2022. (Photo by JOE GIDDENS/POOL/AFP via Getty Images)
Follow Us

Rishi Sunak has vowed to hunt down and stamp out grooming gangs who prey on children and young women, and make their ringleaders subject to maximum life sentences as part of his campaign pledge to be elected Conservative Party leader and the next British Prime Minister.

Under a government headed by him, the Ready4Rishi campaign team said on Wednesday evening that members of grooming rings will automatically face criminal charges for belonging to or facilitating the activity of the gang, with those at its heart facing life sentences.

In a further crackdown on sex offenders, the former chancellor will ban so-called down-blousing, where perpetrators take photos down a woman’s top without their consent to curb abuse targeted at women and bring more offenders to justice.

Sexual violence against women and girls should be treated as a national emergency until it has been defeated. As a father of two girls, I want them to be able to go for a walk in the evening or to a shop at night without any fear of threat, said Sunak, father to schoolgirls Anoushka and Krishna.

Sunak said as chancellor he boosted support for victims to record levels quadruple those under Labour and a ground-breaking new approach to policing which is helping drive up prosecutions of sex offenders.

“As the Prime Minister I will go further. I will make it a criminal offence if you harass women by taking intimate images of them without their consent and will introduce a major crackdown on grooming gangs, he said.

We cannot let sensitivities over race stop us from catching dangerous criminals who prey on women and I will not stop until we live in a society where women and girls can go about their daily lives feeling safe and secure, he said.

The British Indian former finance minister, who is married to Akshata Murty the daughter of Infosys co-founder Narayana Murthy, said he would set up a new emergency taskforce working at the heart of the UK’s National Crime Agency (NCA) to launch an investigation into any town or city where significant grooming gang activity has been found and root it out.

If elected to succeed Boris Johnson at 10 Downing Street, Sunak promises to force suspects to explain why they have the phone numbers or contact details of children. They will also have to reveal their ethnicity or nationality for the purposes of crime prevention.

He also plans to launch a National Grooming Gangs Whistleblower Network to gather intelligence on gangs and create a dedicated database to help the police monitor suspects.

Besides, the focus will be on boosting training for frontline police to help them identify victims of grooming gangs and remind officers to serve without fear or favour, including the fear of being accused of racism.

Rishi will give the Justice Secretary a final say over parole decisions for dangerous criminals. His government will personally review and consider denying parole for any gang member convicted of rape who still posed a risk after serving their sentence, reads his campaign statement.

He will pass the Bill of Rights to help prevent any foreign perpetrators using the Human Rights Act to frustrate their deportation orders, it said.

The former frontline Cabinet minister said he would build on the support for victims he funded as Chancellor 192 million pounds a year by 2024-25, including funding 1,000 sexual violence advisers by extending mental health support for rape victims to be available to them for life.

He will also ensure all survivors of sexual violence have access to same-sex spaces, his campaign said.