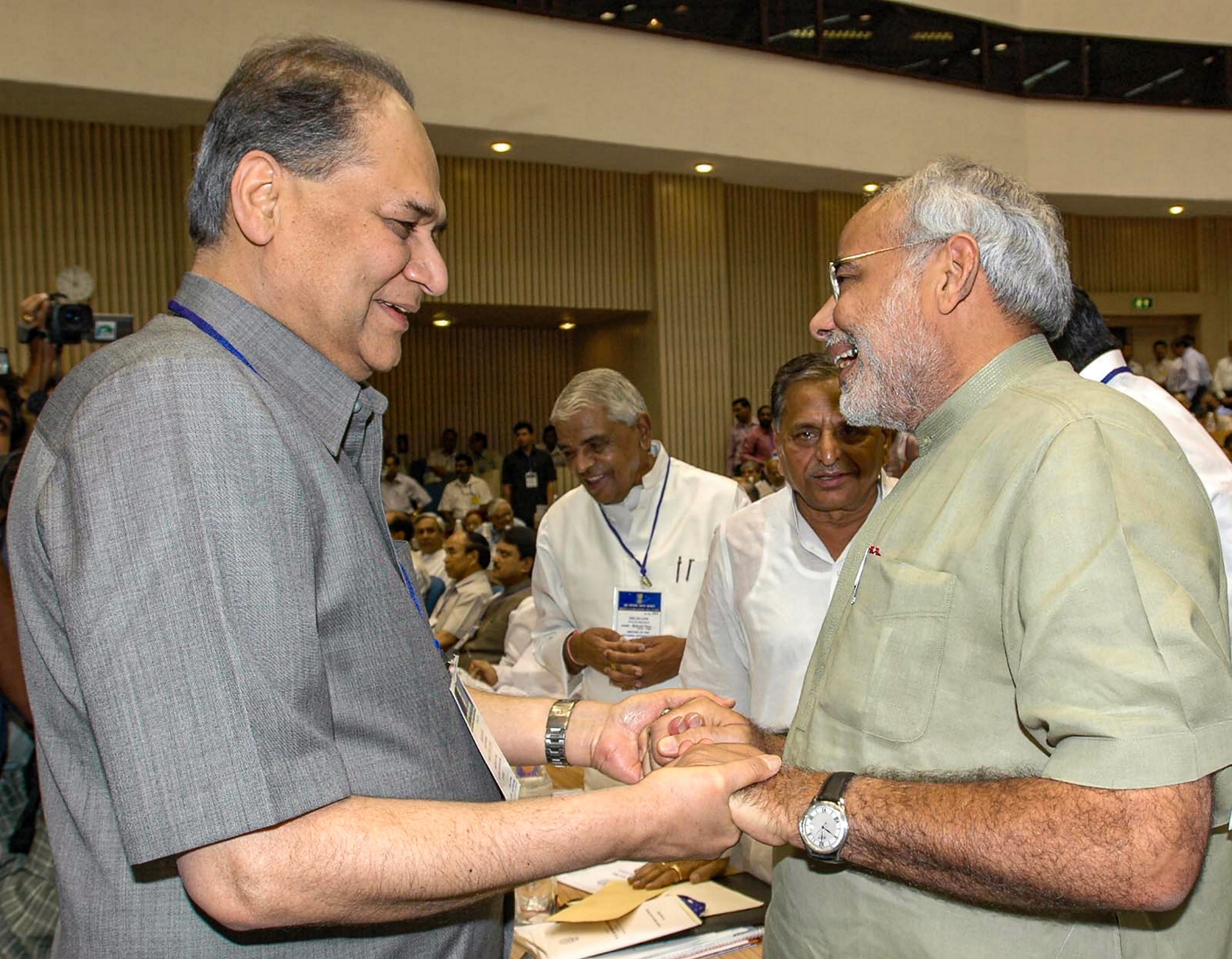 File image dated Wednesday, August 31, 2005, of the then Gujarat chief minister Narendera Modi with industrialist Rahul Bajaj at the National Integration Council meeting in New Delhi. Bajaj passed away at the age of 83, on Saturday, February 12, 2022. (PTI Photo)
Follow Us

BAJAJ CHETAK scooter became an aspirational symbol for the middle class in pre-liberalised India. And the man behind the brand was – Rahul Bajaj.

Straightforward and outspoken, Bajaj not just had the guts to create a two and three-wheeler brand during the red tape era but also had the courage that few industrialists of the present day could talk of.

Bajaj, 83, who was the chairman emeritus of the Bajaj Group when he breathed his last on Saturday (12), was starkly different from his usually diplomatic peers, with his ability to call a spade a spade, even if it meant ruffling feathers in the government or even confronting his son.

Born in Calcutta on June 10, 1938, Bajaj graduated from St Stephen’s College in Delhi and had an MBA from Harvard Business School in the US. He started his career as deputy general manager in Bajaj Group – founded by his grandfather Jamnalal in 1926. He went on to become the CEO in 1968 at the age of 30.

He steered the diversified entity during India’s transition from a closed economy to a liberalised one and drove the company to expand its product portfolio with the Bajaj brand finding a foothold in global markets while warding off emerging competition from Japanese motorcycle makers that challenged the Bajaj Auto’s scooters in the late 1990s.

Under his stewardship, Bajaj Auto, the group’s flagship company, saw its turnover grow to Rs 120 billion (£1.17 bn) from just Rs 72 million (£704560) with the firm’s scooters becoming the mainstay.

The company’s Bajaj Chetak scooter became an aspirational symbol for middle-class Indian families then, with the ‘Hamara Bajaj’ (our Bajaj) tune becoming synonymous with their hopes of a better future, and the picture of a strong nation.

In 2005, he had started passing the baton of the company to son Rajiv Bajaj, who became the managing director of Bajaj Auto and led the company to become a truly global automobile player.

However, when Rajiv decided to do away with scooters and shift Bajaj Auto’s focus on motorcycles in 2009, the senior Bajaj did not hide his disappointment, publicly saying “I feel bad, I feel hurt”. Similarly, his outspokenness came to the fore in November 2019, at an event organised by the Economic Times in Mumbai, where home minister Amit Shah, finance minister Nirmala Sitharaman, and commerce minister Piyush Goyal were present when the veteran industrialist spoke about the government’s “stifling of criticism”.

“This environment of fear, it’s definitely on our minds. You (the government) are doing good work; and despite that, we don’t have the confidence that you’ll appreciate criticism,” he had said.

Bajaj was elected to Rajya Sabha in June 2006 and remained a member till 2010.

He was a recipient of many awards, including the Padma Bhushan and honorary doctorates from many universities. His leadership role in the industry and his guidance was always looked up to.

He was also a former chairman of the International Business Council, World Economic Forum and a former member of the South Asia advisory board of Harvard Business School.

Besides, he was a former member of the International Advisory Council of the Brookings Institution in Washington, DC. The industrialist also spearheaded the corporate social responsibility activities of the Bajaj Group of companies and charitable trusts including Jamnalal Bajaj Foundation.

During the 1980s and 1990s, Bajaj two-wheelers, especially Bajaj Chetak was a common sight on most Indian roads. It was the most used mode for daily commutes of the middle class and even for a romantic spin by young couples.

It was in 1989 that the ‘Hamara Bajaj’ jingle was used to advertise the automobile and the same instantly captured the imagination of pre-cable TV Indian minds, attaining iconic status.