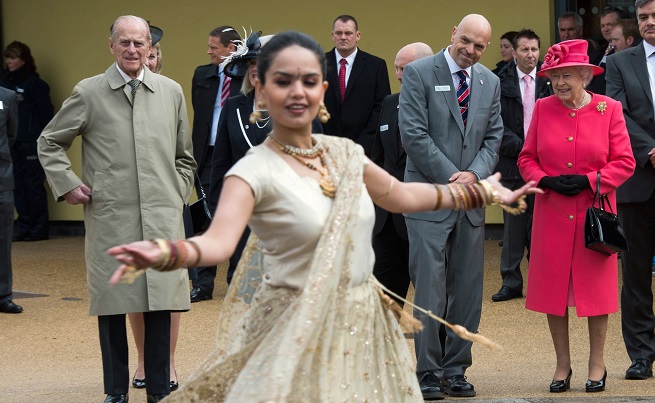 The Queen and Prince Philip watch a dance performance in Chester as part of her Diamond Jubilee celebrations on May 17, 2012 (Photo: Paul Grover/WPA Pool/Getty Images).
Follow Us

IT WOULD be fair to say that Prince Philip was not very well known to British Asians even though, as the Queen’s consort, he was at the centre of the ruling establishment for more than seven decades.

In marked contrast to his eldest son, Prince Charles, he was not seen at Asian functions.

But Asians have learned a great deal about him since he passed away last Friday (9), just two months short of what would have been his 100th birthday.

From the Asian point of view, it would also not be right to define him solely on the basis of his well-known gaffes. This is because he did touch the lives of British Asians in two ways – one direct and the other much more subtle.

Young Asian men and women have been among the hundreds of thousands who have benefited from the Duke of Edinburgh Award scheme which Prince Phil­ip set up in 1956 to “recognise ad­olescents and young adults for completing a series of self-im­provement exercises”.

There are branches all over the world, including one in India.

Among those who credit him for transforming their lives is Ser­ena Gupta, 20, an undergraduate at Warwick University who picked up bronze, silver and bronze badges under the scheme.

By the time she went to Buck­ingham Palace to collect them, the duke had retired and his youngest son, Prince Edward, was officiat­ing in his place.

Gupta said: “When I did the Duke of Edinburgh award, I took part in a year of volunteering in conservation – it made me really love it. I still volunteer now for English Heritage. I’ve been read­ing that Prince Philip was the only one who could act normally around the Queen – that makes me really sad that he’s gone.”

British Asians ought to acknowledge that their lives have been enriched immeasurably by living in a politically stable and tolerant country, which has partly resulted from a functioning constitutional monarchy. If the Queen has scarcely put a foot wrong through her long reign, some of the credit must go to her husband who gave her loyal and unquestioning sup­port. Many British Asians have flourished in this country in a way that might not have been possible had they remained either in the Indian subcontinent or in Africa.

No one really knows what the Duke of Edinburgh thought of the big issues of the day, such as Black Lives Matter; a multi-ethnic, mul­ti-religious, multicultural Britain; how schools should teach the Em­pire or the Partition of India. He clearly made it a point not to speak about them in public.

One of the few Indians who said he got to know the man behind the public image is Lord Indarjit Singh, who said that Prince Philip believed in inter-faith dialogue.

His first trip to India, in 1959, was a solo one. Since he was the Queen’s husband, he was met at the airport by the prime minister, Jawaharlal Nehru.

He became a committed con­servationist and the first president of the World Wide Fund for Nature in 1961. But that same year he had toured India with the Queen, and controversially shot a tiger while staying with long-time friends, the Maharajah Sawai Man Singh II and Gayatri Devi, the youngest Maharani of Jaipur.

The Windsors and the Jaipurs do go back a long way. Although Indira Gandhi abolished titles, the present Maharajah, Sawai Pad­manabh Singh, expressed his sad­ness at Prince Philip’s passing.

“This is truly the end of an era,” he said. “The royal house of Jaipur has been close to the royal family of Britain for generations. One of my ancestors, the late Maharaja Sawai Madho Singh II of Jaipur, was among the few princes from India invited to attend the corona­tion of King Edward VII in 1902.”

He recalled: “When Queen Eliz­abeth and Prince Philip made a state visit to India in 1961, they asked to include Jaipur on their itinerary because of their personal equation. Prince Philip was a tal­ented polo player, who has played on the Rambagh polo ground of Jaipur, just as our family has in England each summer.”

Indeed, Prince Philip was pas­sionate about polo. At one game in Windsor, it was Gayatri Devi who presented the winning cup to him. It was her practice to send Prince Philip a box of Alphonso mangoes every summer.

All this is far removed from the world of British Asians, and Prince Philip’s gaffes and indiscretions are well known, of course.

In 1999, when he visited a high-tech electronics factory in Edin­burgh and spotted a fuse box with protruding wires, he said the as­sembly looked “as if it was put in by an Indian”.

When some local Asians failed to share his sense of humour, Buckingham Palace offered an apology: “The Duke of Edinburgh regrets any offence which may have been caused. With hindsight he accepts that what were intend­ed as light-hearted comments were inappropriate.”

When he saw a badge with the name, “Atul Patel” at a Bucking­ham Palace reception for the Brit­ish Indian community in 2009, he could not resist a wisecrack: “There’s a lot of your family in tonight.”

That was an odd remark from someone who was himself an im­migrant – from a Danish and Greek family with German blood. To his credit, however, he learned to walk behind the Queen and never sought to upstage her.

The TV presenter Andrew Marr angered some viewers who demanded his dismissal because of the way he had discussed the duke with his colleague, Reeta Chakra­barti. Pointing out that Prince Philip followed royal protocol by allowing the Queen to take prece­dence, Marr quipped: “He was al­ways two steps behind, you know, like an Indian bride, as they say. He was always standing behind.”

India’s prime minister Naren­dra Modi recognised that Prince Philip was important in the con­text of UK-India relations. He was also a nephew of Lord Mountbat­ten, the last viceroy of India.

Modi was one of the first world leaders to pay tribute: “My thoughts are with the British people and the royal family on the passing away of HRH Prince Philip, Duke of Ed­inburgh. He had a distinguished career in the military and was at the forefront of many community service initiatives. May his soul rest in peace.”