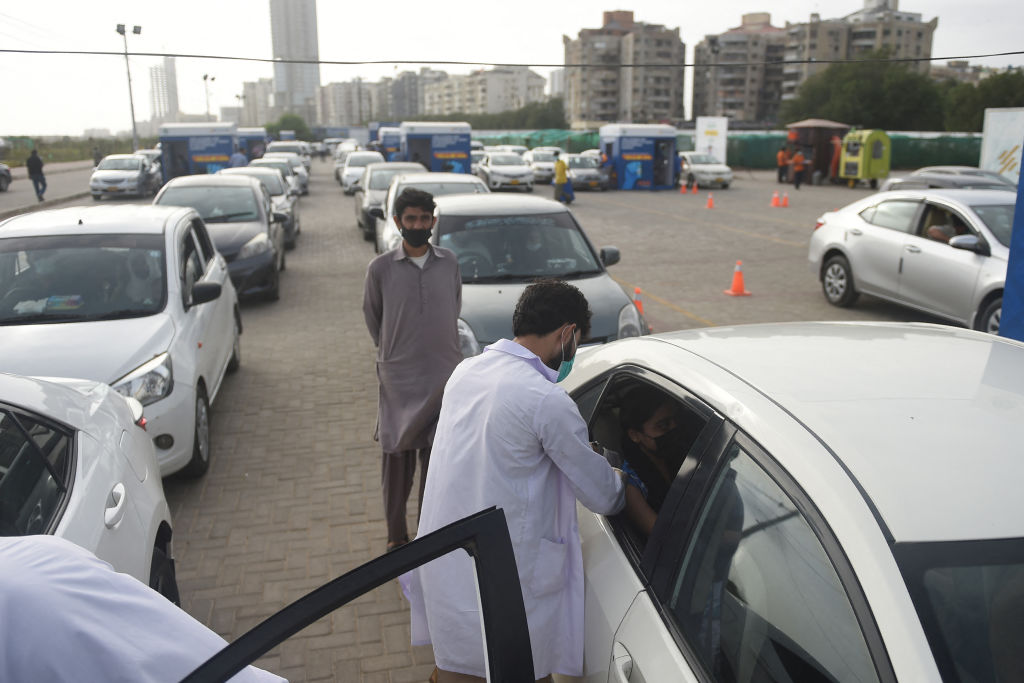 People receive a dose of the Sinopharm vaccine against Covid-19 during a drive-through vaccination in Karachi on August 3, 2021. (Photo by RIZWAN TABASSUM/AFP via Getty Images)

PAKISTAN’S mission in London has expressed the optimism that the south Asian country will exit the UK’s travel red list by August end.

The British government may ease the travel restrictions on Pakistan in its next update on August 26, Islamabad’s high commissioner Moazzam Ahmad Khan said in London.

He said while the concern behind the UK’s decision on border control was understandable, the British authorities should also consider the vital parameters where Pakistan made “exemplary” progress in containing the coronavirus pandemic.

Khan said the UK could not get a clear picture of the Covid situation in Pakistan because of the system it adopted, and “this needs to be corrected”.

He, however, denied any “communication gap” between London and Islamabad on the Covid situation in Pakistan.

“There is no communication gap. We are constantly in touch with them. In fact, I had an opportunity to speak to the prime minister (Boris) Johnson and brought it to his attention that keeping Pakistan on the red list has left both people in Pakistan and the diaspora frustrated and disappointed. He said ‘we are looking into it’.”

On UK’s reservations on low Covid testing in Pakistan, he said the “sample size is sufficient” to make “informed decisions”.

Daily deaths and the demand for oxygen and ventilators should also be considered while taking a call on relaxing travel restrictions, he said.

“Their decision should not be based on one thing, but after considering all factors. We feel when assessing Pakistan’s situation, all elements were not considered,” he told Dawn.

Obliquely referring to the UK easing India from its travel red list to the amber list, he said, “We have fared better than stronger countries, some of which are on the green or amber list.”