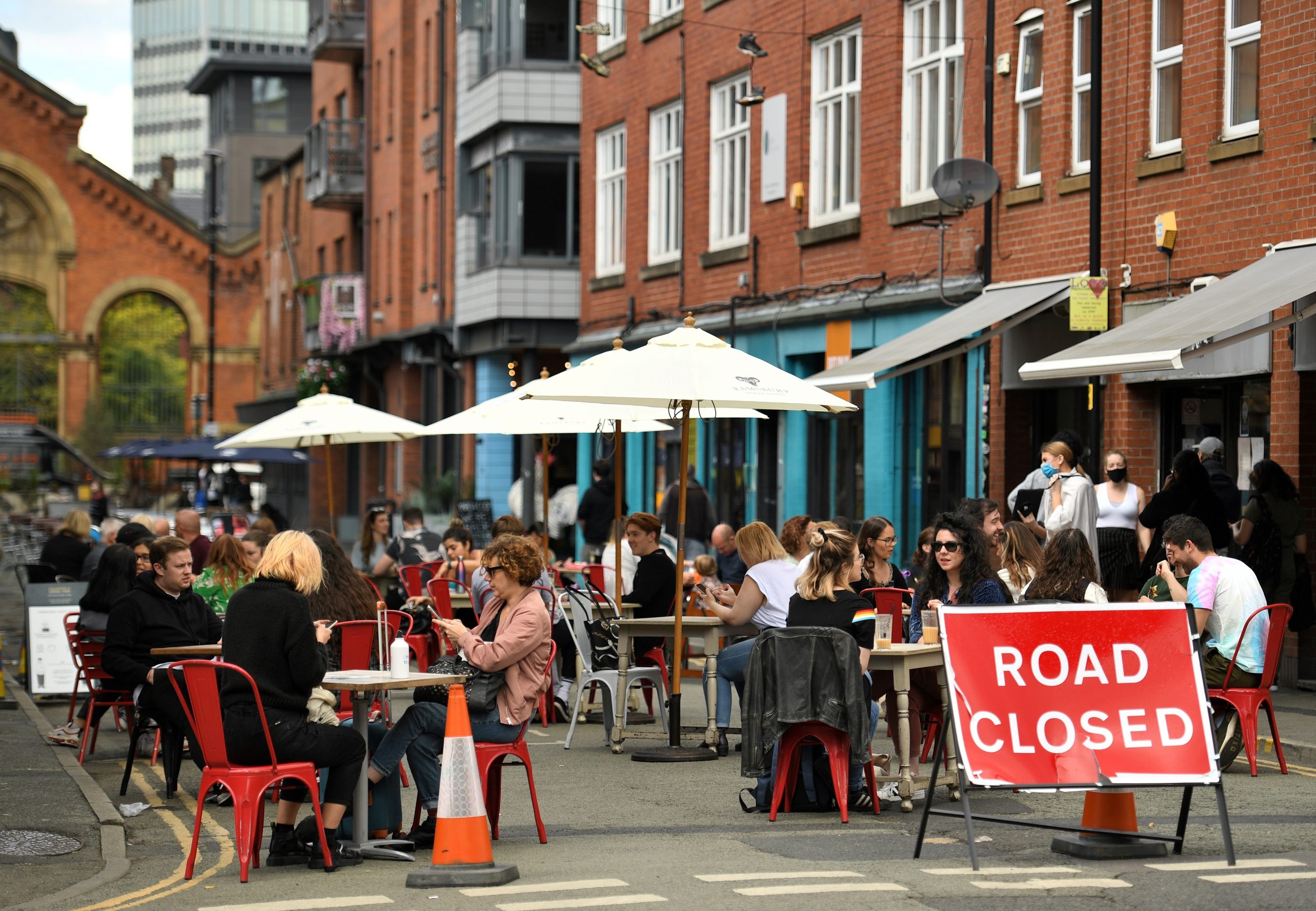 In some areas, eateries are allowed to place more tables and chairs on the streets. (Photo by OLI SCARFF/AFP via Getty Images)

Return of outdoor dining and food festivals ‘lifeline’ for industry

RESTAURANT bosses and foodies have described the relaxing of outdoor dining rules and the return of festivals as a “lifeline” for the industry as they noted the financial impact of diners not turning up after making reservations.

In parts of the country, cars have been barred in order to allow eateries to place more tables and chairs on the streets as they recover from the Covid crisis. In Brick Lane, East London, there is a pedestrian zone on Thursday and Friday nights and all day on Saturdays and Sundays.

Streets in central London’s areas of Pimlico, Belgravia and Mayfair will continue to have al fresco dining after a largely positive response to consultations on the future of the scheme in Westminster, London. In the run-up to National Curry Week (4-10), councils including Manchester, Liverpool and Newcastle said – weather permitting – they had no plans to end the temporary measures.

Nisha Katona, founder of the Mowgli Street Food chain of restaurants, told Eastern Eye: “Mowgli has very few large, outside areas and therefore initially we only traded our Manchester restaurant when the rules relaxed in April.

“We traded well, but most important, this meant we were able to get some of our team back to work.

“What was amazing to see was that so many of our loyal guests support us and, often, this meant they were in their big coats having to brave the Manchester weather. While we only opened one restaurant for outside dining, I know for many of my industry peers, this was a lifeline.”

On no-shows by people making bookings, Katona added: “After the initial lockdown restrictions were lifted, unfortunately no shows were a common occurrence. However, like many businesses we have since introduced a deposit system which has significantly improved our position.

“I also feel that in recent months the general public have grown compassionate towards hospitality businesses and have come to understand how incredibly important their custom is to so many.”

The restaurant sector is in the midst of a revival with more than 200 launches this year compared with 137 in 2020, according to website Hot Dinners. Mowgli is opening a new eatery in West London in October and one in Bristol and Glasgow in 2022. Katona has also written a new recipe book, 30 Minute Mowgli.

Other new south Asian businesses set to open in October are Colonel Saab, Chourangi and Gunpowder Soho – all in London. Archie’s halal burger chain, run by the Rafiq brothers, recently opened its latest diner in Manchester Airport and now has 10 locations across the UK.

“Naturally, the weather is a big role player in this; but, overall, with help from the councils and landlords this has had a positive impact.

“This includes receptions, gatherings, weddings and so on. For those that have the privilege of outdoor seating this has been the most positive happening since the pandemic.”

Todiwala added no-shows are the scourge of the industry and the “bane of our lives at times”.

“London having the highest percentage of noshows leads the nation in stressing out operators,” the television chef added.

“One cannot put an exact estimate on the total loss of revenue per establishment, but it runs into thousands of pounds of lost sales, particularly on weekends. There is nothing one can do except to charge people and hold their card details in case of a no-show.

“But then the operator gets into some very difficult arguments and it is generally unsavoury. Besides, the customer – though being overly unfair – will also call their bank and cancel the transaction.

“So, it’s often a no-win for restaurants.”

Outdoor dining kicked off at the London Stadium, home of West Ham United football club, in September for the London Halal Food festival. Hundreds of people showed the weather the red card by sampling food which ranged from Uzbekistan street food, Indian curries and American-style burgers and hotdogs.

It was the first time the event was held since the pandemic and large crowds queued at the food stalls, mocktail bars and cake stands.

One festivalgoer, Shehnaz, 31, said: “There was a buzzing atmosphere, several people had come with their families and friends.

“It was enjoyable eating outside, although it was difficult to find empty seats.”

Other upcoming festivals include Taste of London in November, the BBC Good Food Show Winter in Birmingham in December and Free From Festival – the UK’s first gluten, dairy and refined sugarfree event in December in Bristol.

Chef Manju Malhi BEM was given a Queen’s Award for food services to the community during the pandemic.

Malhi, whose new recipe book is called The Seasoned Foodie, said: “Although coronavirus still remains a serious health risk, alfresco dining appears to be quite popular with consumers at the moment especially while the weather is warm.

“However, as autumn looms and temperatures drop there may be a personal preference to eat indoors.

“This and other factors – such as the location of the restaurant, council regulations, the effects of increased noise levels and litter on local residents – will have an impact on the success and sustainability of outdoor eating.”