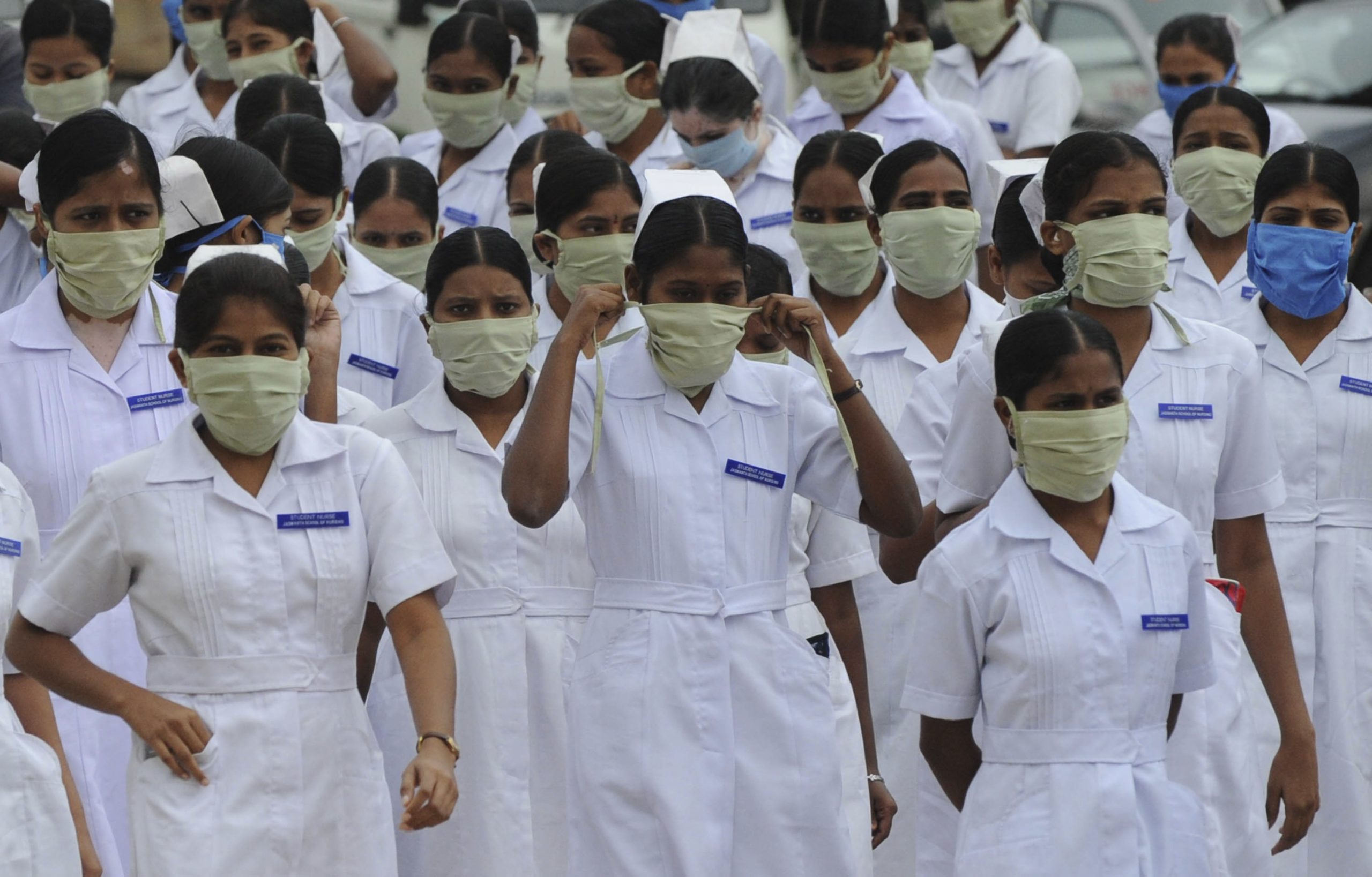 Rushing from one home to another in a village in western India, health worker Ashwini Mhaske cannot afford to take a breather.

Working to keep COVID-19 at bay while caring for mothers and babies, Mhaske races between households to meet job targets and earn bonuses for a average monthly wage of 4,000 rupees ($54) that India’s army of rural health workers say is derisory.

Accredited Social Health Activists – or ASHA workers – are the government’s recognised health workers who are usually the first point of contact in rural India, where there is often limited or no direct access to healthcare facilities.

Many of India’s one million all-women ASHA workers – who have conducted door-to-door checks to trace coronavirus patients in addition to their usual duties – went on strike this month to demand job recognition, better pay and proper protective gear.

“Now we work all hours, with no days off,” said 33-year-old Mhaske, who used to do farm work shifts to supplement her ASHA income before the coronavirus pandemic struck India in March.

India’s coronavirus cases crossed the 3.2 million mark this week – it is behind the United States and Brazil – after a surge in rural areas where two-thirds of its 1.3 billion people live.

With infections spreading further to small towns and remote regions, experts say the epidemic in India is likely to be months away from its peak, putting more strain on an already overburdened healthcare system and struggling ASHA workers.

“All we (ASHA workers) are saying is that the government should think about us,” Mhaske told the Thomson Reuters Foundation by phone from Osmanabad in Maharashtra state.

Enlisted as part of a 2005 national programme to boost healthcare services across rural India – from maternal care to vaccination drives – ASHA workers are treated like volunteers and not covered by state governments’ minimum wage legislation.

They recently received a 33% hike to their basic monthly salary due to the new coronavirus, and get bonuses for tasks such as 50 rupees for ensuring five children are immunized and 600 rupees for taking pregnant women to hospital to give birth.

Yet labour economists and campaigners said ASHA workers were still hugely underpaid for their duties, and earned about half as much as farm workers employed under government job schemes.

“In the name of community service, they are working without commensurate remuneration or rights,” said K.R. Shyam Sunder, a professor at the Xavier School of Management in Jharkhand.

“This amounts to indignity or undignified labour … the returns to the society from their work will far outweigh the meagre economic cost in regularizing them.”

India’s health ministry has not officially responded to ASHA workers’ demands for a base salary of 10,000 rupees per month.

“They get task-based incentives and we already have a set of incentives … that would yield 5,000 to 6,000 rupees a month,” said Vikas Sheel, joint secretary at the health ministry.

Yet payment records reviewed by the Thomson Reuters Foundation of nearly 600 ASHA workers from four states – Maharashtra, Bihar, Uttar Pradesh and Madhya Pradesh – revealed average earnings of about 4,000 rupees for the month of July.

Sheel said individual states had the discretion to boost the earnings of local ASHA workers and that some states had done so.

“But there isn’t one clear payment structure for the whole country,” said Ranjana Nirula, convenor of the All India Coordination Committee of ASHA Workers, which is a union.

“This is part of unpaid labour of women and is seen as an extension of the work women do at home.”

Several ASHA workers said they had worked around the clock and been on call at all hours since March – when millions of migrant workers returned to villages from cities post-lockdown.

The health workers recorded every arrival, took travel histories and helped place the labourers into quarantine, all while carrying out their maternal and child healthcare duties.

Leela Devi Rawat, a 30-year-old ASHA worker in Udaipur in northwestern Rajasthan state, said she was exhausted due to her new responsibilites yet had no choice but to keep working.

“How do I run my house if I quit? My husband takes up daily wage work but has had no earnings in lockdown,” she said.

Payment records for 195 workers in Maharashtra seen by the Thomson Reuters Foundation showed average earnings of 4,156 rupees in July – an increase of 60 rupees from February despite the 1,000 rupees wage hike that was implemented in March.

Workers said their coronavirus duties meant they had little time to carry out other tasks that awarded them bonus payments.

“Asha workers have emerged as the backbone of primary healthcare in India,” said physician Abhay Bang, founder of the public health non-profit ‘Search’.

“Over the years, their work has gone from part-time to full-time,” he said, adding that their average work day was at least 12 hours. “You call them community workers, so you don’t give them government wages. But you keep full control over them.”

The Indian government and Prime Minister Narendra Modi have hailed the ASHA workers in recent months for their role in containing the epidemic in India.

Yet such praise means little to many ASHA workers as their work days get longer while their pay remains roughly the same.

“I hope the payment will improve and maybe I will grow professionally,” said Mhaske, who recently enrolled in a computing course to widen her career prospects.

“I hope that some day it will be better.”