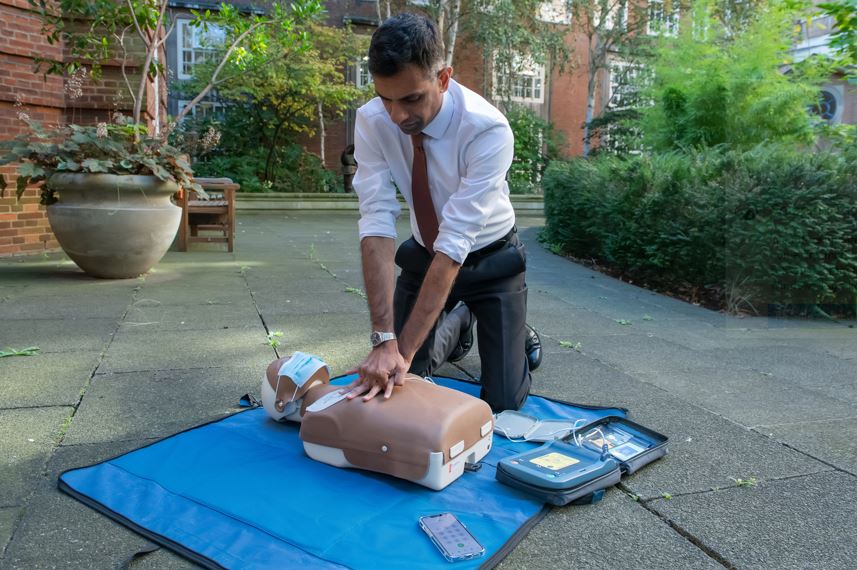 AN NHS leader on ethnic health inequalities has urged people from black, Asian and minority ethnic (BAME) backgrounds to learn cardiopulmonary resuscitation (CPR) skills ahead of Restart a Heart Day on Saturday (16).

Dr Habib Naqvi, the director in charge of the NHS Race and Health Observatory, has called for action as a new survey revealed many people don’t know the difference between a cardiac arrest and a heart attack, a statement said.

A quarter (26 per cent) of BAME people surveyed thought that a cardiac arrest and a heart attack are the same, while a third (33 per cent) didn’t know whether they are the same or different.

Almost half of respondents (47 per cent) from minority backgrounds have never received any type of training on how to help someone experiencing a cardiac arrest.

A cardiac arrest is when someone has collapsed, is unresponsive and showing no signs of life and is not breathing normally. Calling 999, starting CPR quickly and accessing and using a public access defibrillator – if one is available – are crucial steps to take to give the person who’s not breathing normally their best chance of survival.

Dr Naqvi said: “Every year across the UK, more than 30,000 people have a cardiac arrest outside of a hospital and the majority of these take place at home. Sadly, only 1 in 10 people survive.

“I want as many people as possible to have the skills and confidence to know what to do and to act quickly in an emergency, so they are in the best position to give a loved one the best chance of life. It doesn’t take long to learn the skills you need, because one day you might need to use them.”

Professor Andrew Lockey, consultant in emergency medicine and vice president, Resuscitation Council UK, said: “I understand people may feel nervous about doing CPR because of Covid-19, and that’s why Resuscitation Council UK currently advises that you do chest compression-only CPR and don’t put your face near the person who has collapsed when checking for breathing.

“As eight out of 10 cardiac arrests happen at home, you’re most likely to need to do CPR on someone you know and care about.”

“Everyone should learn CPR and how to use a defibrillator, so if someone collapses and stops breathing normally, they know what to do,” said GPs Nadeem and Ismail, who saved Dilraj from cardiac arrest in Leicester two years ago.

Rohit Sagoo, founder and director of British Sikh Nurses, said: “With most sudden cardiac arrests outside of hospital taking place in the home, knowing what to do and starting CPR could mean the difference between life and death for a member of your family in an emergency. When you ring 999, the operator will support you and talk you through what to do, but please take the time to learn what to do now so you feel even more confident to act and help someone who needs you.”

The eighth annual Restart a Heart Day aims to train people in how to perform CPR. The campaign is led by Resuscitation Council UK, in partnership with St John Ambulance, the British Heart Foundation, British Red Cross and all UK ambulance services.