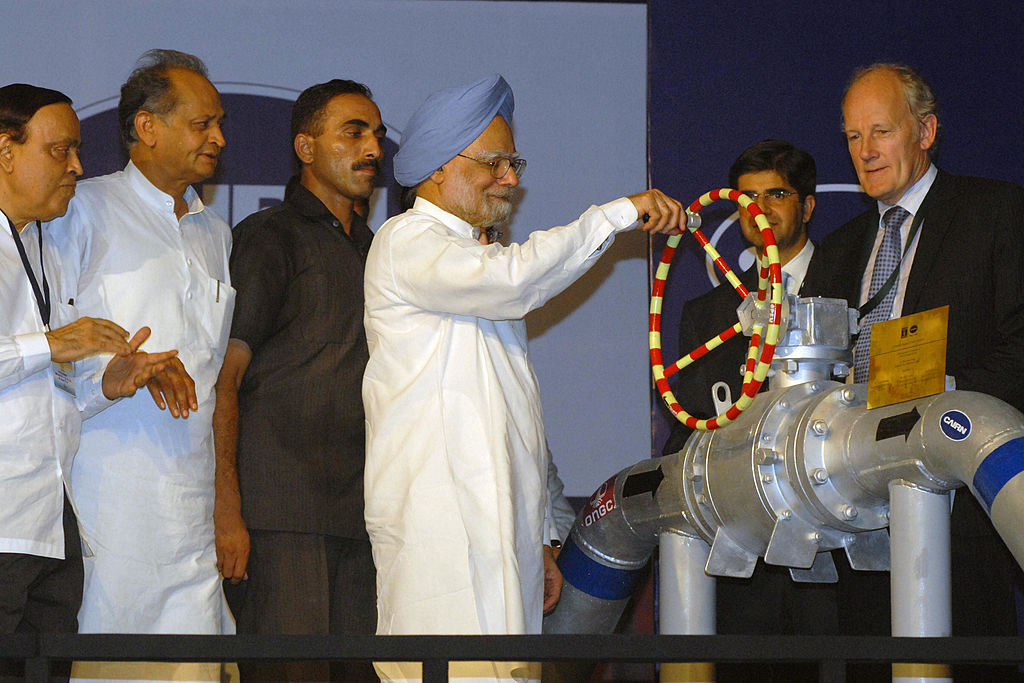 A file photo of India’s previous prime minister Manmohan Singh (C) turning the wheel to open a valve, allowing the first oil to flow from a new oil field, as Cairn Energy chairman Bill Gammell (R) looks on during the inauguration of the Mangala oil field in Barmer on August 29, 2009. But India’s subsequent demand for retrospective tax affected business sentiments. (Photo by RAVEENDRAN/AFP via Getty Images)

A NEW York court has paused Cairn Energy’s pursuit of US assets of Air India for the recovery of a $1.2 billion (£870 million) arbitral award, allowing the British firm to reach a settlement with the Indian government on a long-drawn dispute.

The New York district court delayed the tax suit to November 18, according to court documents.

This follows Cairn Energy and Air India jointly asking the court to stay further proceedings, given the enactment of a fresh law in India to scrap retrospective taxation in the country.

The new law will result in the withdrawal of a Rs 102.47 billion (£1.01bn) tax demand that the government had sought from Cairn.

Sources with direct knowledge of the matter said the finance ministry is framing rules that will lead to the withdrawal of the retrospective tax demand on Cairn and 16 other companies, including Vodafone Group of the UK.

These rules require the companies to withdraw all litigations against the government in return for refund of any money that was collected to force the retrospective tax demand.

A format for the undertaking that the companies will have to furnish committing to withdraw litigations is under finalisation and should be released in coming days, they said.

Companies will have to use the format to give an undertaking, post which the money will be refunded.

The British company had won an international arbitration award against levy of such taxes and sought to take over Air India assets when the government refused to honour the award and refund $1.2 billion (£870 million)-plus interest and penalty.

Cairn has indicated that the refund, without interest and penalty, was acceptable to it, opening an avenue to settle the seven-year-old dispute.

Cairn and Air India in a joint request to US district judge Paul Gardephe on September 13 stated that a stay on proceedings would give them “additional time to evaluate the effects and implications” of legislation that repealed the retroactive tax.

One of those suits was filed in May against the state-owned Air India Ltd, which Cairn has said should be considered the alter ego of the Indian government.

“The implementing regulations are in the rulemaking process and will take some time,” the two had said in the petition seeking extension of the October 21 deadline for the presentation of case papers and initial pretrial conference on October 28.

They had requested the court to “stay any further proceedings in this matter through October 31, 2021, and reschedule the initial pretrial conference and the deadline for the parties to submit their Joint Pretrial Letter and Proposed Case Management Plan, for new dates in November 2021.”