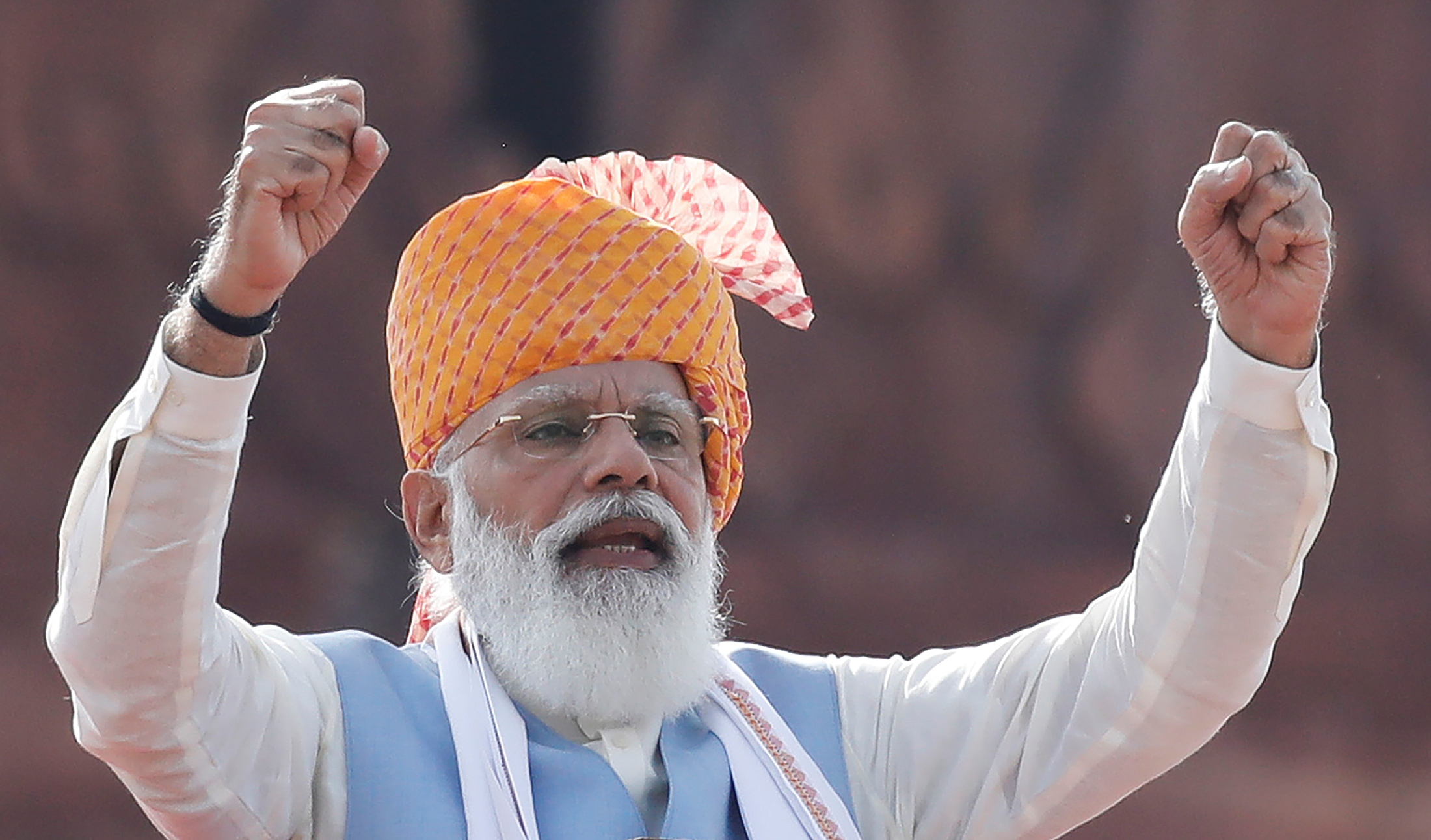 THE author of a new book on Narendra Modi has warned that India’s transformation to an “ethnic democracy”, in which religious minorities are relegated to second class citizenship, may reach the “point of no return”.

Christophe Jaffrelot, a Frenchman who is professor of politics and sociology at King’s college London, has written what is thought to be the most detailed analysis of the Indian prime minister’s politics and policies in Modi’s India: Hindu Nationalism and the Rise of Ethnic Democracy.

In an interview, Jaffrelot predicted that “changes under Modi may be permanent if the Hindutva forces have not only captured power, but also society – at least temporarily – and if this hegemonic position allows them to get deeply entrenched in the state apparatus, then a point of no return will be reached.”

His 639-page book, published by Princeton University Press and translated from the French by Cynthia Schoch, has such chapters and sections as: Hindu Nationalism: A Different Idea of India; Hindutva: What It Means to Be a Hindu; Modi in Gujarat: The Making of a National-Populist Hero; Targeting Minorities; Anti-Christian Xenophobia; Recurrent Mobilizations against Muslims; The Slow Death of the Right to Information; and What Fourth Estate?

Among India scholars, his book has been called “the most comprehensive account to date of Narendra Modi’s capture and consolidation of power” by Partha Chatterjee of Columbia University, while sociologist at Brown University, Patrick Heller, said,“Modi’s India is quite simply the most detailed, theoretically sophisticated, and comprehensive analysis of the rise of Modi’s BJP as a dominant electoral force”.

“This book has tried to make sense of the political trajectory of India from populism to ethnic democracy and authoritarianism under Narendra Modi, a journey of less than 10 years,” writes Jaffrelot, who wears a number of
other hats.

He is based in Paris, where he was elected president of the French Political Science Association last year and is a permanent consultant with the policy planning staff of the French foreign ministry. Jaffrelot is also director of research at CERI-Sciences Po/CNRS and a non-resident scholar at the Carnegie Endowment of International Peace.

His books include The Pakistan Paradox and Hindu Nationalism: A Reader and a biography of BR Ambedkar.

In his latest book, Jaffrelot states: “Under Modi, the government moved India toward a new form of democracy, an ethnic democracy as defined by (professor of sociology at the University of Haifa) Sammy Smooha, or majoritarianism.

“In this new political system, the majoritarian community is assumed to be one and the same as the nation, thereby relegating minorities to second-class citizens.

“For the BJP under Modi, waving a largely exaggerated Islamic threat and orchestrating communal violence were viewed as the best way to mobilize a ‘Hindu vote’ whenever the situation was conducive to such agitation.”

According to Jaffrelot, “the Indian variant of ethnic democracy needed to be qualified in contrast to the Israeli ‘model’. During Modi’s first term India  invented a de facto ethnic democracy in which the Constitution and most laws remained unchanged and in which the government remained in the background — mostly silent.

“Certainly, the state promoted the Hindu nationalist version of Hindu identity, Indian history, and the role of minorities in society and history. But it left most coercive actions to non-state actors, such as to vigilante groups that exerted cultural policing in the street or to trolls doing the same on social media.

“National populism has not only made India an ethnic democracy; it has also prepared the ground for authoritarianism.”

In his conclusion, the author refers to the political scientist Suhas Palshikar: “In 2019, Suhas Palshikar concluded his contribution to Majoritarian State by considering that ‘electoral defeat alone can puncture the BJP’s resolute march towards crafting a new hegemony’, but electoral defeat may not make much of a difference, or, to be more precise, while it is a necessary condition, it may not be a sufficient one. First, the Sangh Parivar is so deeply entrenched in the social fabric that it may continue to dictate its terms to the state on the ground – and to rule in the street. Second, the ‘deep state’ may remain in a position to influence policies and politics even if the BJP is voted out. In that sense, Hindu nationalism does not rely as much on one man to push its agenda as the BJP does to win elections.”

Jaffrelot said he was introduced to Indian philosophies at 18 and has long taken an interest in Hinduism, Buddhism and Sufism. He did his PhD on Hindu nationalism and has been to India at least twice a year and interviewed hundreds of people since his first visit in 1984. They include politicians ranging from AB Vajpayee to LK Advani, Kanshi Ram, Mulayan Singh Yadav, Nanaji Deshmukh and Madhu Limaye.

“I have devoted my career to south Asian studies,” he said. Jaffrelot began researching Modi in 2002 and visited Gujarat annually since then.

“I was particularly interested in the way he was transforming Gujarat into a Hindu nationalist laboratory. He has introduced a new political repertoire in India by combining Hindutva, populism, communal polarisation, politics of fear and crony capitalism.”

Jaffrelot said, “I continued to visit Ahmedabad once a year and other cities as well, including Delhi and Mumbai, but also Lucknow, where the Hindu nationalist forces were adapting the Gujarat model to the local conditions of Uttar Pradesh.

“In the course of this investigation, I have added two dimensions to the ones listed above: elitism and authoritarianism. Regarding the former, I show that the rise to power of BJP has translated into a comeback of upper-caste politicians, a dilution of reservations and pro-rich policies in terms of taxation, among other things.”

He explained how he sees the model of democracy in India: “Democracy, nowadays, is a notion you need to qualify when applied to India. You may say, like some scholars do, that it is an ‘illiberal democracy’. I prefer to use the concept of ‘ethnic democracy’ that has been first used in the case of Israel. An ‘ethnic democracy’ is a regime where pillars of democracy are still practised, including elections – something populists across the globe need to retain to
acquire legitimacy – but where minorities are second class citizens because of all kinds of discrimination. You may use too the word ‘majoritarianism’ which designates the attempt for transforming a cultural majority into a permanent, political majority.”

His view of the Fourth Estate is that “the mainstream media is losing its  independence for all kinds of reasons, including the ads policy of the government, intimidation (due to income tax and Enforcement Directorate  raids), concentration of media outlets in the hands of businessmen who
need the government’s support or are close to the rulers – not to say anything about the lack of courage of many newsmen who are easily co-opted by the regime.”

Jaffrelot said “the Election Commission has lost some of its independence,” and, as for the
Supreme Court, “under four different chief justices it abstained from opposing the government for all kinds of reason, ranging from the fact that some of its members had been blackmailed, shared ideological affinities with the regime or anticipated post-retirements sinecures”.

He hopes to visit India to debate and discuss the ideas in his book. “If academic works relying of years of empirical research could not be discussed anymore in India, the very notion of democracy would be in question.”

Jaffrelot has no idea how the Modi government will react to the book. “No  government likes its work to be examined, because all governments paint rosy pictures of their achievements. The question is how far will they engage with scholars who analyse their policies and strategies. It’s a test of freedom of expression.”