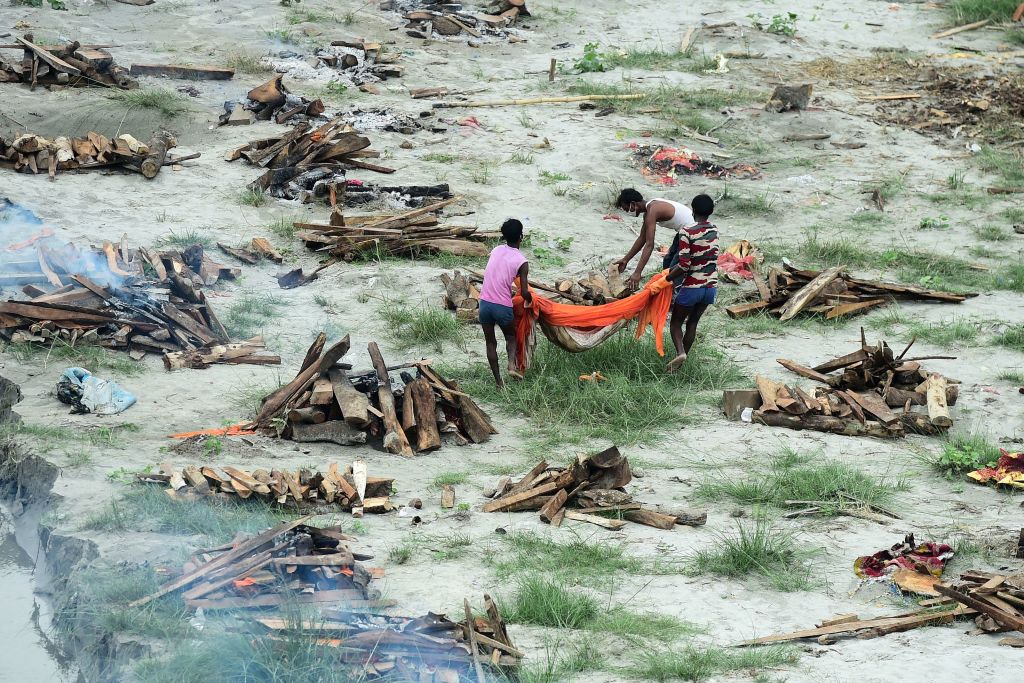 Municipal corporation workers prepare to cremate a body buried in a shallow grave on the banks of the Ganges river during the Covid-19 pandemic as they cremate other bodies also buried there to prevent them from floating downstream as water levels increase near Phaphamau Ghat, in Allahabad on June 25, 2021. (Photo by SANJAY KANOJIA/AFP via Getty Images)
Follow Us

MORE corpses are washing up on the banks of the Ganges in India’s most populous state of Uttar Pradesh, as rains swell the river and expose bodies buried in shallow graves during the peak of the country’s latest wave of coronavirus infections.

Videos and pictures in May of bodies drifting down the river, which Hindus consider holy, shocked the nation and underlined the ferocity of the world’s biggest surge in infections.

Though cases have come down drastically this month, the Uttar Pradesh city of Prayagraj alone has cremated 108 bodies found in the river in the last three weeks, said a senior municipal official.

“These are those dead bodies which were buried very close to the river and have gone into it with the rise in its water levels,” said Neeraj Kumar Singh.

“The municipal corporation has deployed a team of 25 people who are working day and night on this front.”

India, the world’s second-most populous country, saw its health infrastructure crushed in April and May. Hospitals ran out of beds and life-saving oxygen and crematoriums became overwhelmed with the dead.

The government of Uttar Pradesh, home to 240 million people, acknowledged in May that bodies of Covid-19 victims were being dumped into rivers in a practice likely stemming from poverty and families abandoning victims for fear of the disease.

“Instructions have been passed to every district magistrate to cremate the dead bodies with proper respect,” said Uttar Pradesh government spokesperson Navneet Sehgal.

“There are dead bodies buried on the river bank and it is because of a local tradition.”

The state reported 224 Covid-19 infections overnight, taking its total caseload to 1.7 million, while total official fatalities are at 22,366.