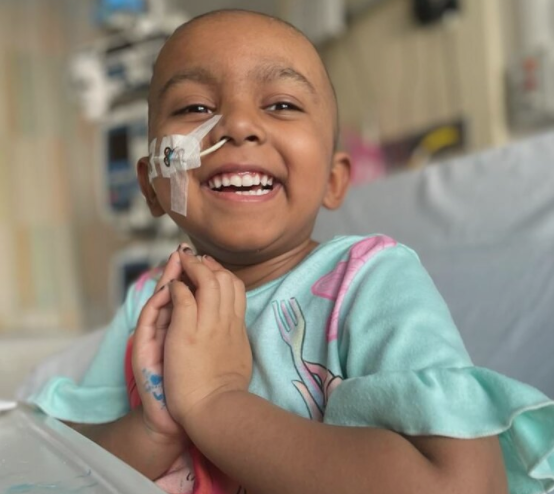 A potentially life-saving stem cell donor has been found for a four-year-old east London girl who was diagnosed with cancer and was given just three weeks to live, reported The Daily Mail.

According to the report, her family – including her father Rishya, mother Kavitha, older sister Ria and aunt Lavanya – appealed for help from the South Asian community to help Esha fight the life-threatening disease, because donors of her ethnicity are rare on the registry.

“We have some positive news to share with you! A matching donor has been found for Esha. We are yet to learn more details about this development, but we wanted to immediately share this news with all of you who have made this possible for us,” her family wrote on Instagram on Tuesday (14).

“Your continuous show of support and love, in addition to those who have since registered to become a stem cell donor, has been one of the main driving forces for us as a family. You have enabled us to push hard every single day for the last 12 days since we found out the devastating news.”

The family added that they will continue the campaign until September 20 as they initially planned in case they can find someone who is a closer match to Esha.

Acute myeloid leukaemia (AML) is a cancer of the blood that starts in the bone marrow and spreads into the bloodstream and is extremely rare in children of Esha’s age. It is a rare type of cancer, with around 3,100 people diagnosed with it each year in the UK.

According to The Mail report, South Asians are heavily underrepresented in the registry and it is much more difficult for patients with a diverse ethnic heritage to find a matching donor.

Esha’s father Rishya Nadeswaran, 44, previously said finding a donor for Esha was her ‘last chance’ after her two rounds of chemotherapy failed to work.

According to charity Anthony Nolan, 75 per cent of UK patients won’t find a matching donor in their families, while people from minority ethnic backgrounds have a mere 37 per cent chance of finding the best match from a stranger.

Henny Braund MBE, chief executive of Anthony Nolan, called for people aged 16-30 from South Asian backgrounds to join the register to help Esha and others like her.