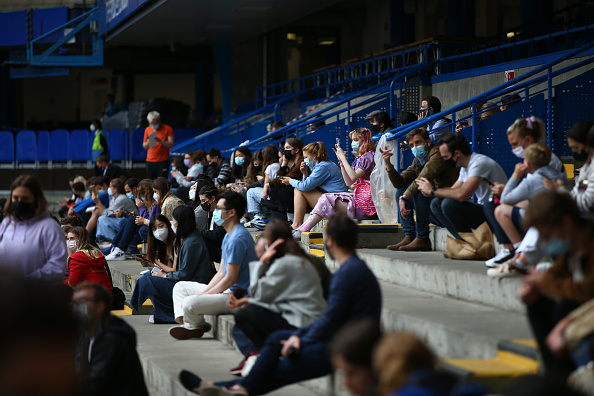 People sit in the observation area after receiving their vaccine at the Chelsea F.C. pop up vaccine hub on June 19, 2021 in London, England. Chelsea F.C. is offering Covid-19 jabs to all eligible locals over the age of 18. (Photo by Hollie Adams/Getty Images)

STADIUMS and football grounds in London got transformed into mass vaccination centres over the weekend to administer thousands of Covid-19 jabs after Britain opened up it’s vaccine drive for over-18s on Friday (18).

Mass vaccination centres have been set up at the Olympic Stadium Stamford Bridge, Tottenham Hotspur FC Charlton Athletic FC, Selhurst Park and Crystal Palace Athletics Centre. Smaller events are also taking place in local community venues in a drive to vaccinate as many Londoners as possible.

Mayor of London Sadiq Khan said that it is great news that more than eight million doses of the life-saving Covid-19 vaccine have been given to Londoners, and now all adults over the age of 18 are able to get the jab.

“We are seeing the big difference that the vaccine is making in our fight against the virus, so I strongly urge all adult Londoners to book their appointments or attend a walk-in centre as soon as possible, and to ensure you get your second dose,” Khan said.

More than 42 million people in the UK have had their first jab and more than 31 million are now double-jabbed, according to the latest figures.

With the vaccine drive, the country is moving  towards a situation where people who have been double-vaccinated could be exempt from quarantine, Public Health England’s chief Covid-19 adviser Dr Susan Hopkins has said.

Saying that the impact of vaccination can be seen in key infection hotspots, Hopkins said that a decision will be made soon after analysing the results of a study that uses daily lateral flow tests as an alternative to isolation for 10 days after coming into contact with a positive case.

Meanwhile, experts feel that the “60 per cent more transmissible” Delta variant is fueling a third wave of infections in the country. Prof Adam Finn, a member of the Joint Committee on Vaccination and Immunisation (JCVI), which advises the government, said that the race is on between the vaccine programme and Delta variant.

“We can conclude that the race is firmly on between the vaccine programme, particularly getting older people’s second doses done, and the Delta variant third wave,” Finn told BBC Radio 4’s Today programme.