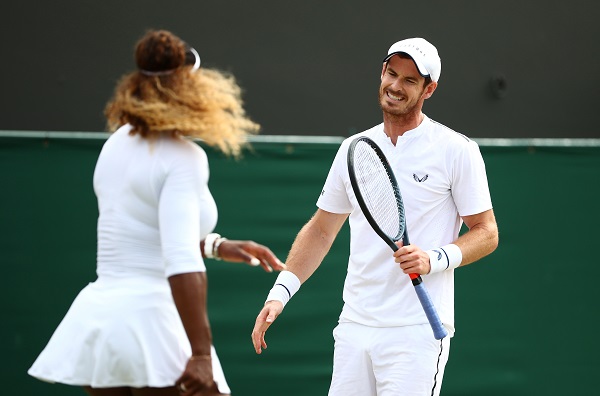 Tennis – Wimbledon – All England Lawn Tennis and Croquet Club, London, Britain – July 10, 2019 Serena Williams of the US and Britain’s Andy Murray during their third round doubles match against Nicole Melichar of the US and Brazil’s Bruno Soares (Photo: REUTERS/Hannah McKay).
Follow Us

FORMER world number one Andy Murray has said it could take up to a year for him to regain the strength in his hip needed for a return to singles action.

The 32-year-old claimed the doubles title with Feliciano Lopez at Queen’s Club on his return to competitive tennis late last month after undergoing career-saving hip resurfacing surgery in January.

The Scot lost in the second round of the men’s doubles at Wimbledon with Pierre-Hugues Herbert and in the third round of mixed doubles with Serena Williams but said there was still a long way to go before a return to singles competition.

“During a hip resurfacing operation … a lot of muscles are severed and stitched back up so it takes a lot of time and needs hard physical work to recover properly,” Murray wrote in his column for the BBC.

“That strength is not going to come back in just three or four months, it could take nine or 12 months.

“I need to get those muscles back to a certain level before I can go on a singles court and try to play best of five sets, otherwise I could do damage if the strength isn’t there.”

The three-time Grand Slam winner said he would focus on physical conditioning to improve the strength in his hip over the next four to six weeks.

“I’m happy to be pain-free and want to get my hip as good as it can be. Once it is strong again I can get back to competing,” Murray added.