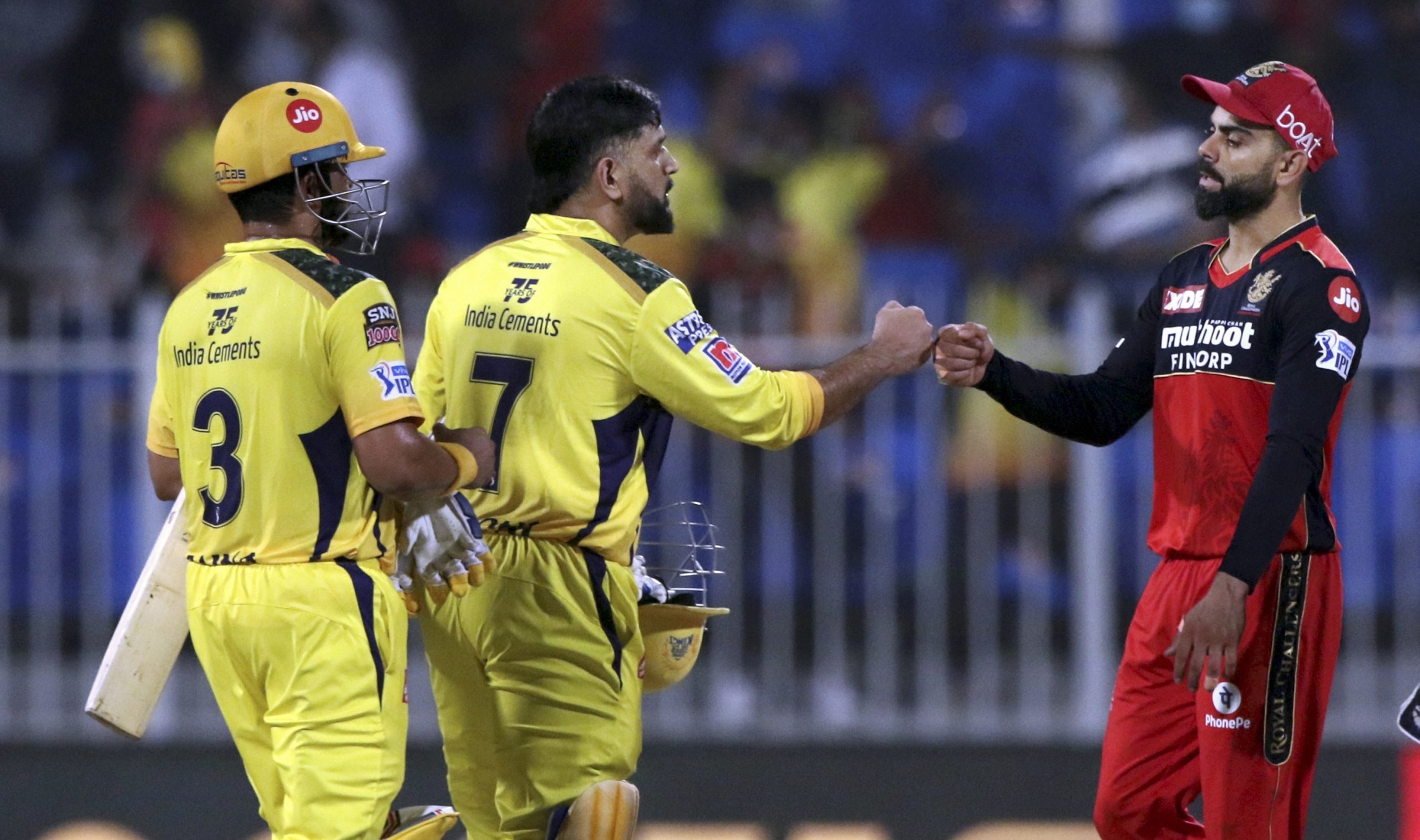 MS Dhoni and Suresh Raina after winning the match for CSK. (PTI Photo/Sportzpics for IPL)

Chennai, bolstered by 38 from opener Ruturaj Gaikwad, overcame Bangalore’s 156 for six with 11 balls to spare as Dhoni won the latest battle with his successor as India’s captain.

Kohli has been under the spotlight since announcing this month that he would step down as India’s T20 captain after the World Cup and the Bangalore captaincy after this IPL tournament.

But after Bangalore lost by nine wickets in their first match of the resumed tournament, Kohli has now seen his side suffer three defeats in total in their last five games.

After Friday’s start was delayed by a sand storm in Sharjah, Kohli, who has vowed to concentrate more on his batting, hit 53 in an 111-run opening partnership with Devdutt Padikkal.

He hit a six and six fours while Padikkal went on to make 70 off 50 balls with three sixes and five fours.

The openers raced to 46 in five overs with Kohli smashing his six over mid-wicket in Shardul Thakur’s first over.

He was eventually caught by Ravindra Jadeja off Dwayne Bravo going for another boundary in the 14th over.

Seeking to step up the tempo, AB de Villiers made 12 off 11 balls before he was caught by Suresh Raina off Thakur in the 17th over. With the next ball, Thakur had Padikkal caught by Ambati Rayudu going for a scoop shot.

Singapore batsman Tim David lasted just three balls on his IPL debut before he was caught by Raina off Deepak Chahar for just one run.

Glenn Maxwell went for 11 in the last over, caught by Jadeja off Bravo, who added Harshal Patel with the final ball, again caught by Raina. The West Indies allrounder finished on three for 24.

The target was never a serious challenge for Chennai.

Gaikwad’s 38 came off just 21 balls with a six and four fours. Kohli made a brilliant diving catch off Yuzvendra Chahal to dismiss Gaikwad.

But Faf du Plessis made 31, Moeen Ali rattled off 23, including two sixes, and Ambati Rayudu hit 32 to put Chennai in a winning position.

Raina and Dhoni saw Chennai to 157 for four and took them back to the top of the eight team table, level with Delhi Capitals on 14 points.

Bangalore remain third but Kohli admitted that they need to get back to winning ways again to escape the chasing Kolkata Knight Riders, Rajasthan Royals and Mumbai Indians.

“We have to start doing that and quickly because this tournament goes by very quickly,” said Kohli who bemoaned his side’s lack of consistency and the number of boundaries offered by his bowlers.

“We did not show that much courage with the ball,” he said.