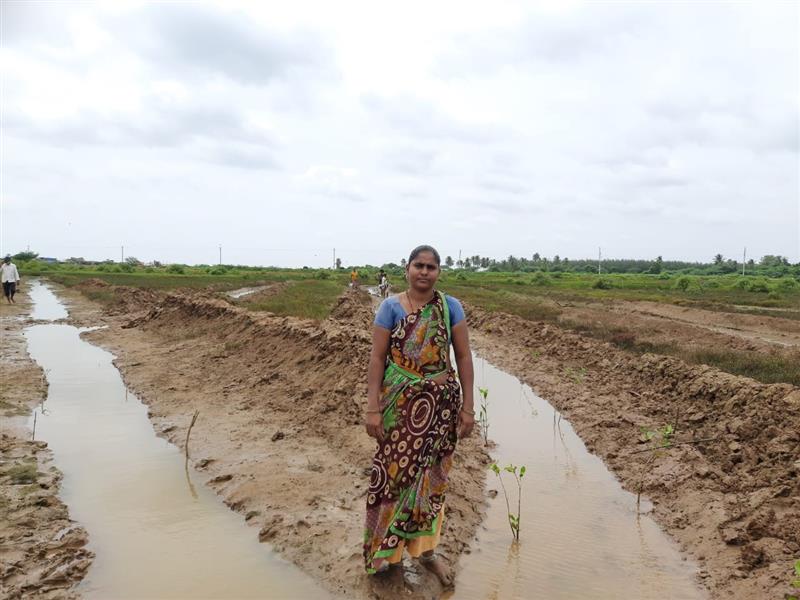 Marada Suguna poses for a picture at a mangrove plantation site on the outskirts of Amaravalli village in Andhra Pradesh. (Thomson Reuters Foundation/ Picture courtesy Raj Babu)
Follow Us

ON the outskirts of Amaravalli village on India’s east coast, Marada Suguna has been hard at work planting mangroves.

Hired through India’s rural employment scheme, she is on the frontline of a project by the Andhra Pradesh state government to protect fishing villages from storms and coastal erosion.

“I have seen the sea move forward into our land and one of our village roads has disappeared,” Suguna told the Thomson Reuters Foundation over a video call from her work site.

“I think this mangrove plantation we are doing will help because it will stop the water and prevent the soil from eroding,” she added. “I feel it is important work.”

Suguna is among millions of Indians who find jobs under the Mahatma Gandhi National Rural Employment Guarantee Scheme (MGNREGS), the world’s largest such programme that provides at least 100 days of work annually to every rural household.

Credited with alleviating poverty, empowering women and giving work to people who lost jobs to the Covid-19 pandemic, the scheme is now also helping to create climate resilience in communities affected by frequent floods, droughts and erosion.

The Indian government has recognised MGNREGS as a key tool to address climate change, and issued new guidelines in 2019 highlighting the need to use climate data and vulnerability assessments to plan the type of work done under the programme.

The scheme, which has 140 million workers, has prioritised natural resources management in recent years, focusing on water conservation, agroforestry and reviving degraded land.

The job scheme captured 102 million tonnes of carbon dioxide in 2017-2018 through tree planting and projects to improve soil quality, according to a study published in May by researchers at the Bengaluru-based Indian Institute of Science.

The research, which used data analysis and field reports to estimate the emissions reduction benefits of MGNREGS, found that drought mitigation activities such as tree planting and grassland development were most effective in storing carbon.

“A lot of the work taken under the scheme focuses on natural resource management and our research shows that the benefits are there on the ground,” said study co-author NH Ravindranath.

Cyclonic storms that form in the Bay of Bengal have become fiercer and more frequent – particularly in the last decade – as sea surface temperatures have risen, several studies have found.

Paddy farmer M Satyanarayan said villages in the East Godavari district of Andhra Pradesh had started considering mangrove planting as a form of defence since the 1996 cyclone that killed at least 1,000 people.

“It was around that time that talk of mangroves began in our villages,” said the 40-year-old from Chollangipeta village.

“Initially people objected … saying it would eat into the grazing grounds for their livestock. Slowly, they came around. I have seen the fury of the sea and the protection mangroves can provide.”

Village councils in India, which have the final word on what work will be undertaken locally under MGNREGS, are increasingly green-lighting projects that can help tackle climate change.

However, Sudha Narayanan, a research fellow at the International Food Policy Research Institute, said the scheme monitors the number of workdays created and wages paid but is not mandated to track the longer-term benefits of the work.

“Trees are planted but often they don’t survive,” she said. “Similarly, village ponds created for recharging groundwater are used for irrigation and nobody is monitoring.”

“It is important to measure the impact of all these works to understand if it is actually mitigating climate change,” she added.

As part of its pledge under the 2015 Paris Agreement, India – the world’s third-biggest carbon emitter – is supposed to reduce its carbon footprint by 33-35 per cent from 2005 levels by 2030.

Andhra Pradesh is piloting the restoration of mangroves in degraded areas along the coastline in three districts across 20 acres (8 hectares) as part of its climate change initiative through MGNREGS.

To that end, the state is measuring the CO2 emissions the scheme is able to avert, and is already seeing success in its water conservation programmes, he added.

“The MGNREGS mandate has traditionally focused on providing jobs to those who need them,” said Sowmithri VR, technical expert with German development agency GIZ.

GIZ is working with several Indian states including Tamil Nadu on the project, with a focus on water conservation, creating mini forests, reviving degraded land and agroforestry.

“The present focus is on ways to build climate resilience into the labour programme,” Sowmithri said. “The idea is to create jobs that create climate-resilient assets.”

Suguna said she understood how planting mangroves would protect her village and her fisherman husband’s livelihood.

“Once these saplings take root, they will become our protectors against the high tides, storms and erosion,” she said.

“My husband hardly goes out to sea anymore, complaining that the catch has reduced. I hope my hard work and the mangroves will bring back the fish also.”