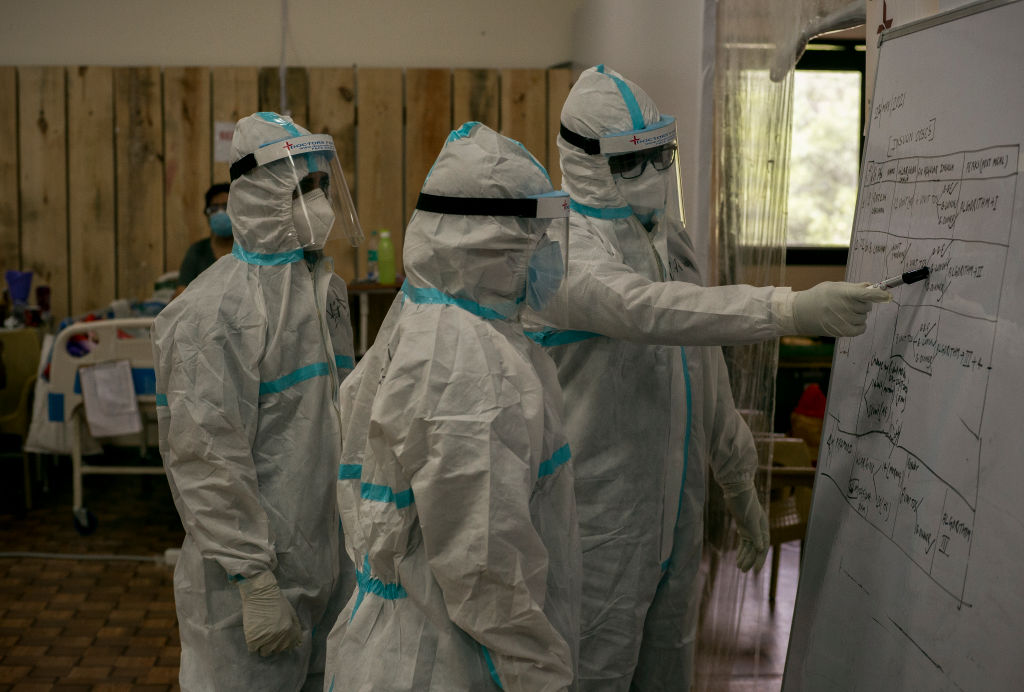 Doctors and medical workers wearing PPE suits (Personal Protective Equipment) perform their routine tasks inside a isolation center where patients tested positive of Covid-19 coronavirus are being treated at a Covid care center set up at the premises of a cricket stadium with the support of Uttar Pradesh Government in the wake of rising cases of the Covid contagion on May 23, 2021 in Noida, India. (Photo by Anindito Mukherjee/Getty Images)

MORE THAN 500 doctors died and hundreds more doctors, nurses and other health workers have become infected in the new Covid-19 wave in India, according to a report in The Washington Post.

The Indian Medical Association this week confirmed the covid-related deaths of 515 physicians since March, publishing their names and pictures. The group previously reported that 748 doctors had died because of the virus in 2020.

“When we required double the manpower, our manpower was cut in half,” Mayur Rathod, a doctor managing covid treatment at Saroj Hospital in New Delhi, told The Post.

“During the first weeks of the surge, cases were rising fast and patients were more critical. Nearly all 100 doctors and 180 nurses there had been vaccinated, yet many fell sick. It was a very hard time.”

At the All India Institute of Medical Science, director Randeep Guleria said patient admissions in April suddenly tripled to nearly 900. “At one point, we had 100 patients lying on the floor waiting for an emergency bed,” he told the newspaper.

India has recorded 1.3 million new cases in the past week, and even as daily cases have dropped since mid-May, reported deaths still hover near 4,000 per day.

According to the report, even now, staff shortages have left hospitals struggling to fill shifts, keep operations going and maintain staff morale. Some managers have assigned doctors to covid duty who are nearing retirement age; others have asked medical schools to release more postgraduate students for hospital work.

“It’s like a war, with a first and second line of defense. Before, we said strictly that no one above 60 or with comorbidities will be put on covid duty, but once junior doctors started getting infected, even senior people were drafted,” Ajay Swaroop, who chairs the ear, nose and throat department at Sir Ganga Ram Hospital in Delhi, told The Post.

Since March, 474 health-care workers at Ganga Ram have been infected, including 148 doctors and 186 nurses. In the capital, officials said more than 100 doctors had died in the surge.

Neelam Lekhi, vice president of the Delhi Medical Association, said that many hospital doctors had fallen ill from a combination of stress and long hours, and that more than 50 per cent who were not fully vaccinated had become infected.

One of those who died was Anas Mujahid, 26, an obstetrician at a Delhi hospital. On May 8, he collapsed with a fever and headache; by the next morning, he was dead, the report said.

In other parts of the country, hospital officials described going into crisis mode since April, trying to do more with less and keep staff morale from collapsing. In Tamil Nadu state, officials of government Rajaji Hospital said one doctor had died and nearly 150 staffers have been infected. On Wednesday, Tamil Nadu reported a record-high rate of 34,000 coronavirus infections in the past week.

“The second wave is more severe than the first,” said Senthil Kerupiah, the hospital’s covid treatment coordinator. “We are seeing a lot of cases, but at times, we are not able to deliver the best possible care.” He said staff members were “scared and upset” when the surge struck. “We are mentally weakened by the duration of the pandemic, and we are not sure when it will be over,” he said.

Rajan Sharma, a former president of the Indian Medical Association, complained that despite their sacrifices, most of the more than 1,000 doctors who have died of the virus in the past year are not getting the recognition and family support they deserve. He also asserted that their numbers have been undercounted, The Post report said.

Nursing associations reported that while many members had been infected by the virus this month, most recovered quickly. Officials of the largest nurses union in Delhi reported no covid-related deaths among its 6,000 members.

Last week, in the southern city of Hyderabad, Avinash Subhedar and his wife, Shobha, both retired general practitioners in their 70s, died within days of each other after contracting the virus. They had remained at home during the surge but agreed to receive patients, exposing themselves to infection, the newspaper report said.