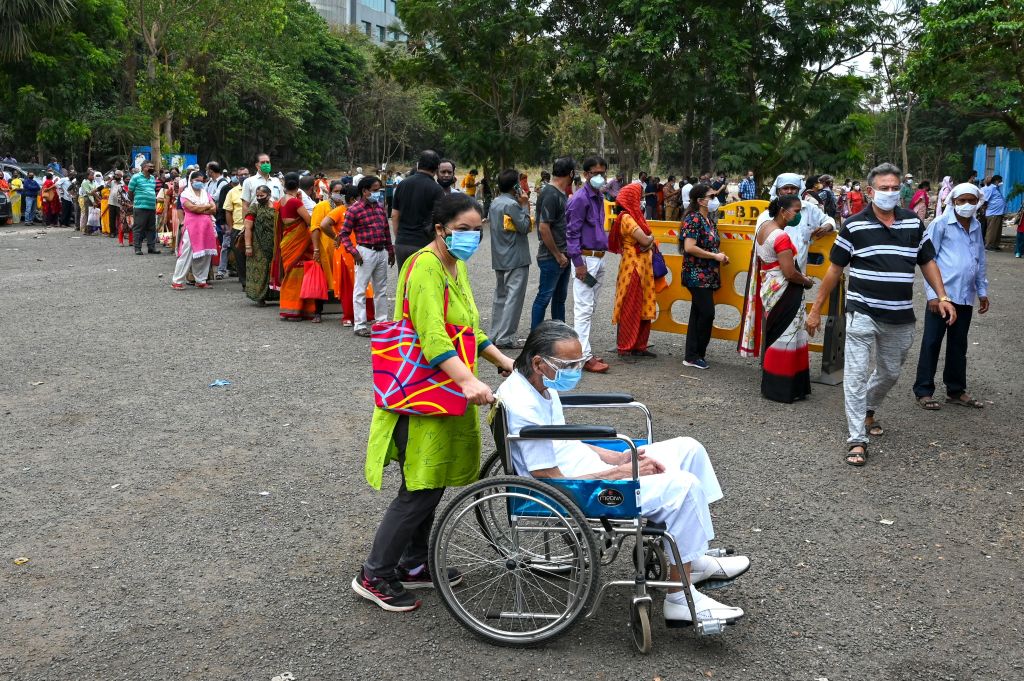 People wait in queues to receive the Covid-19 coronavirus vaccine at a vaccination centre in Mumbai on April 22, 2021. (Photo by PUNIT PARANJPE/AFP via Getty Images)

INDIA’s daily coronavirus death toll passed a new record Saturday (24) as the government battled to get oxygen supplies to hospitals overwhelmed by the hundreds of thousands of new daily cases.

Queues of Covid-19 patients and their fearful relatives are building up outside hospitals in major cities across India, the new world pandemic hotspot which has now reported nearly one million new cases in three days.

Another 2,624 deaths, a new daily record, were reported in 24 hours, taking the official toll to nearly 190,000 since the pandemic started.

But many experts are predicting the current wave will not peak for at least three weeks and that the real death and case numbers are much higher.

Stung by criticism of its lack of preparation ahead of the wave of infections, the central government has organised special trains to get oxygen supplies to the worst-hit cities.

It has also pressed industrialists to increase production of oxygen and other life-saving drugs in short supply.

One ‘oxygen express’ carrying 30,000 litres for hospitals arrived in Lucknow, Uttar Pradesh state at dawn on Saturday, where armed guards were waiting to escort trucks to hospitals.

Lucknow has been one of the worst hit cities, with hospitals and crematoriums inundated with patients and bodies, and officials said the liquid oxygen would only be enough for half a day’s needs.

The Indian air force is also being used to transport oxygen tankers and other supplies around the country.

In New Delhi, the city’s government said it would begin setting up buffer stocks of oxygen to speed supplies to hospitals when they are within hours of running out.

Many patients are dying outside hospitals in the capital because of the lack of beds and oxygen.

One charity has set up an overflow crematorium in a car park, with makeshift funeral pyres built to deal with the mounting deaths.

Health experts said India became complacent in the winter, when new cases were running at about 10,000 a day and seemed to be under control, lifting restrictions that allowed for the resumption of big gatherings.

Others said that it could also be a more dangerous variant of the virus coursing through the world’s second most populous country where people live in close proximity, often six to a room.

“While complacency in adhering to masks and physical distancing might have played a role, it seems increasingly likely that this second wave has been fuelled by a much more virulent strain,” wrote Vikram Patel, Professor of Global Health at Harvard Medical School, in the Indian Express.

WHO emergencies director Mike Ryan said reducing transmission in India would be a “very difficult task” but the government was working on limiting mixing between people, which he said was essential.