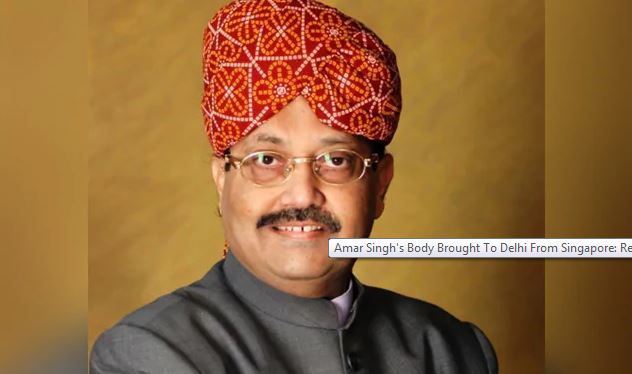 INDIAN politician and former Rajya Sabha member Amar Singh was cremated at the Chhatarpur crematorium in New Delhi in the presence of family members and relatives on Monday (3).

The 64-year-old ‘kingmaker’ politician died in a Singapore hospital, where he was undergoing treatment for kidney-related ailments, on Saturday (1).

Daughters Drishti and Disha consign flames to the mortal remains of Rajya Sabha member Amar Singh. His body was brought to Delhi in a chartered aircraft. His wife Pankaja was also on the plane.

Due to Covid-19 protocols, Singh’s last rites were performed in the presence of a limited number of people, including actor-turned-politician Jaya Prada.

Indian defence minister Rajnath Singh and BJP Rajya Sabha member Jyotiraditya Scindia were among the first ones to pay floral tributes to the former Samajwadi Party leader at his Chhatarpur farmhouse.

Singh had been undergoing treatment at a hospital in Singapore for six months and had earlier undergone a kidney transplant in 2013.

Hails from Uttar Pradesh in North India, Singh was the general secretary of the Samajwadi Party and was a member of the Rajya Sabha, the upper house of the Indian parliament.

His prominence in Indian politics surged when the Congress-led government was reduced to a minority after the Communist Party of India withdrew their support over the proposed Nuclear Accord with the US. His party pledged support to the government with the support of its 39 members

On 6 January 2010, he resigned from all the posts of the Samajwadi Party and was later expelled from the party by its chief, Mulayam Singh Yadav, on 2 February 2010.

In 2015, he announced retirement from politics. But, a year later he was elected to Rajya Sabha with support from Samajwadi Party even after facing a stiff opposition from a section of the party including the then chief minister of Uttar Pradesh Akhilesh Yadav.

He was also reinstated as one of the general secretaries of the party in October 2016.