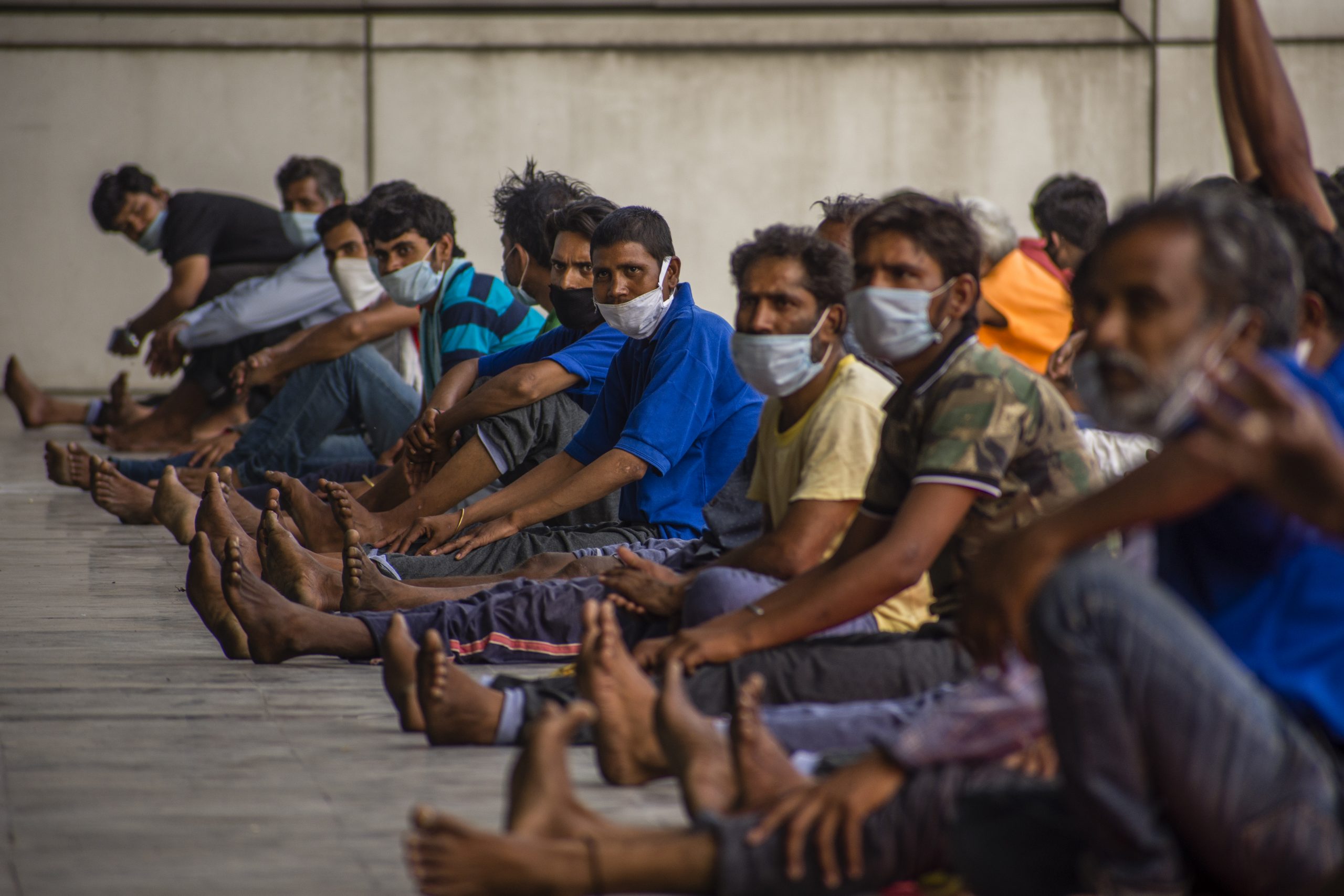 NEW DELHI, INDIA – APRIL 14: Indian migrant workers, daily wagers, laborers and homeless perform yoga at the Yamuna sports complex, which has been converted into a temporary shelter for those in need, as India remains under an unprecedented lockdown over the highly contagious coronavirus (COVID-19) on April 14, 2020 in New Delhi, India. The Yamuna Sports Complex is one of the several shelters set up by authorities to provide food and accommodation to homeless people, migrant workers and others who were left stranded in India’s national capital following the imposition of a nationwide lockdown on March 25 to curb the spread of coronavirus which has so far killed over 300 people and affected over 10,000 others. In a televised address, India’s Prime Minister Narendra Modi on Tuesday morning extended the lockdown till May 3. (Photo by Yawar Nazir/Getty Images)

Tens of thousands of stranded labourers have been herded into camps and shelters across India like the Yamuna sports complex in Delhi where their suffering has been forgotten amid the world’s biggest coronavirus lockdown.

Once used for the 2010 Commonwealth Games, the air is now rank with urine in the stadium halls that house 900 men and women rounded up after the government ordered everyone off the streets on March 24.

India’s estimated 45 million migrant workers, existing on a paltry and precarious daily wage, have not been a priority in the rush to halt the spread of COVID-19.

Millions of migrants lost their jobs overnight in big cities like Delhi and Mumbai. Many walked hundreds of kilometres (miles) to reach their home villages and at least 12 died on the way, according to media reports.

The downbeat, fearful faces of Yamuna residents highlight how unhappy they are with their treatment. And the government has said the lockdown will go on until at least May 3.

Picked up on the streets or at bus stations, they now sleep on thin mats in the halls, are banned from leaving the complex, and life in the stifling heat is strictly regimented.

Three meals a day are prepared in open kitchens, with flies hovering around. And each day hundreds of men are forced into physical exercise led by an instructor dressed in ninja-style black overalls and a bandana.

“Keep straight or I will hit hard,” barked the man while rolling a baton in his hands, as neat rows of dishevelled labourers nervously performed star jumps.

Migrants in Mumbai and other cities have staged demonstrations demanding to go home. That was also the desperate wish of many in the Delhi stadium.

One woman sat with a half-naked sick infant in her lap as she gestured wildly at passing police and said she wanted to be with her husband at another shelter.

Mukesh Yadav, a handcart puller, said he was picked up by police as he started a trip to the eastern state of Bihar to be with his ailing father.

He was not allowed to return to his wife and three children in Old Delhi. “I am worried that their rations will run out soon. Who will look after them?” he said.

Ramesh Lal, an HIV-positive patient with prescriptions and other documents to prove it, said he was scooped up when he went out to get a blood test.

Veer Singh, a 23-year-old with no family, fought back tears as he told of his desire to get back to the Sikh temple where he worked.

Police and other security forces set up the emergency shelters after the Supreme Court ordered the government take action to deal with the migrant labourers and homeless.

Lalit Goyal, a police official in charge of the Yamuna shelter, said his staff were trying to find a way to release those who live nearby.

He said it was “challenging” looking after the migrants but insisted most were “happy” because they were fed. He also justified the mandatory daily exercise.

“They are so used to hard manual labour that if we don’t make them do some rigorous exercise they are unable to sleep at night,” he said.

“They are always treated as nowhere people. Even now they just want to go back home,” Aiyar told AFP.

“It is absolutely wrong to deny people their basic right to go back home.”