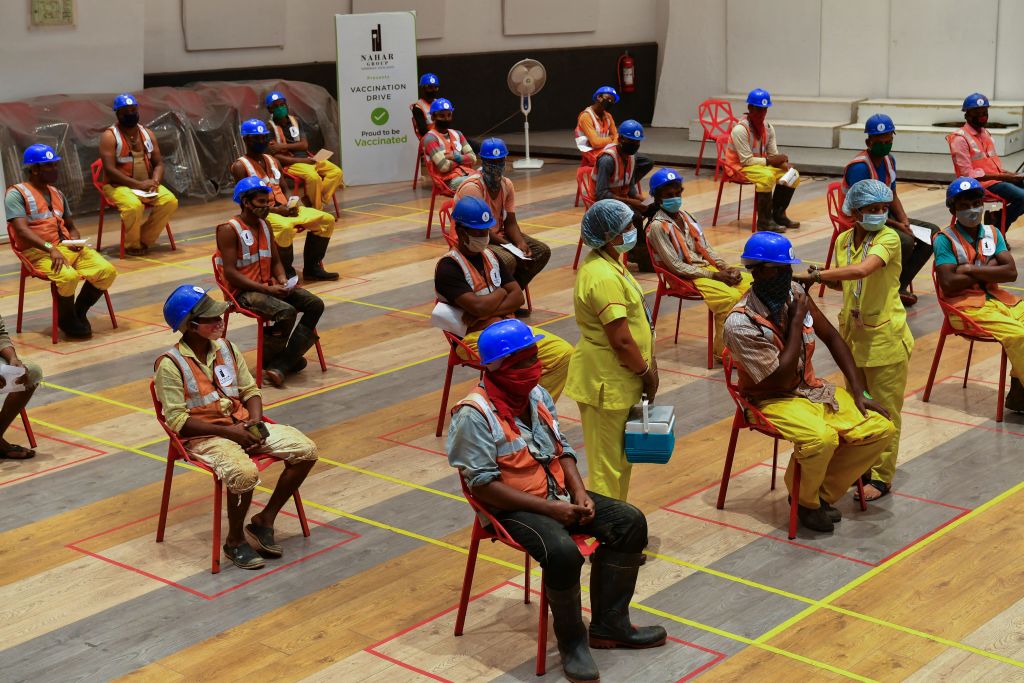 A health worker inoculates a construction worker with a dose of a Covid-19 coronavirus vaccine during a vaccination drive organised by the Nahar Group for their staff, in Mumbai on June 16, 2021. (Photo by INDRANIL MUKHERJEE/AFP via Getty Images)
Follow Us

HEALTH OFFICIALS in India’s richest state have urged authorities to step up preparations against a possible third wave of coronavirus infections, they said on Friday (18), as lockdowns eased less than a month after a surge that killed thousands.

India’s second most populous state of Maharashtra lifted many curbs this week in its cities, such as the financial capital of Mumbai, re-opening malls, movie theatres, and gyms at 50 per cent capacity and freeing offices from staff attendance limits.

“We should have a clear plan, and keep our preparations ready for the next few weeks, whenever the next wave comes,” said Rahul Pandit, a member of the state’s Covid task force and a director of Fortis Hospitals Mumbai.

“Our efforts should be directed in delaying the wave as much as we can, and even try to prevent it.”

A Reuters poll of medical experts showed a third wave of infections is likely to hit India by October, and although it will be better controlled than the last outbreak, the pandemic will remain a public health threat for at least another year.

Maharashtra, the epicentre of India’s second wave, has yet to fully emerge from it, Pandit added, after having gone into lockdown in early April as the surge pushed sparse healthcare facilities to breaking point.

Maharashtra, with 9,830 new infections overnight, accounts for about a fifth of India’s total of 29.76 million infections. Its death toll stands at more than 116,000.

Crowds and traffic also filled streets in other cities, from the capital of New Delhi to the southern tech hub of Bengaluru, though experts cautioned that a race to resume business activities could compromise vaccination efforts.

“The government on its part has to ramp up vaccination to reach a target of 10 million jabs a day and also unleash a blitzkrieg about the advantages of vaccination to overcome vaccine hesitancy,” said Harsh Mahajan, president of Nathealth, a grouping of private healthcare providers.

Although India is the world’s largest vaccine producer, it has managed to inoculate only a little over five per cent of all 950 million eligible adults.

Daily deaths below 2,000
India on Friday reported 1,587 fresh fatalities due to Covid-19, the lowest in 61 days. With
62,480 new coronavirus infections, the total tally of Covid-19 cases rose to 29,762,793 and the death toll climbed to 383,490, the health ministry said.
The active cases have fallen below 800,000 after 73 days and the national Covid-19 recovery rate has crossed 96 per cent.
A net decline of 28,084 cases has been recorded in the Covid-19 caseload in a span of 24 hours.
A total of 1,929,476  tests were conducted on Thursday (17) taking the total cumulative tests conducted so far for detection of Covid-19 in the country to 387,167,696.
The daily positivity rate was recorded at 3.24 per cent. Recoveries continue to outnumber daily new cases for the 36th consecutive day, the ministry added.
According to official data, 268,960,399 Covid-19 vaccine doses have been administered so far under Nationwide Vaccination Drive.